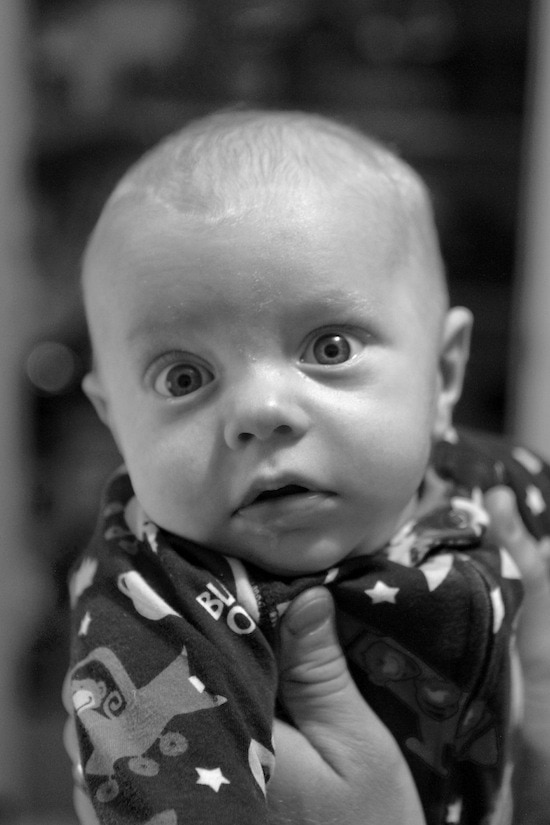 My little baby is turning into a little boy!! I think he’s growing into his looks now that he’s older and getting all chunky! We love our little Blake-man! It’s amazing how much I can get done on such little sleep. I’m able to deal a lot better this time around. Not sure if my body is just adapting much quicker, or I have a lot more going on so I don’t have time to notice it, but whatevs. I’m grateful to tackle my to-do list before 6pm mommy nap time rolls around. I don’t really nap at 6pm….I wish!! I’ll talk more about the sleep situation in a minute. Here are the deets on le bebe. 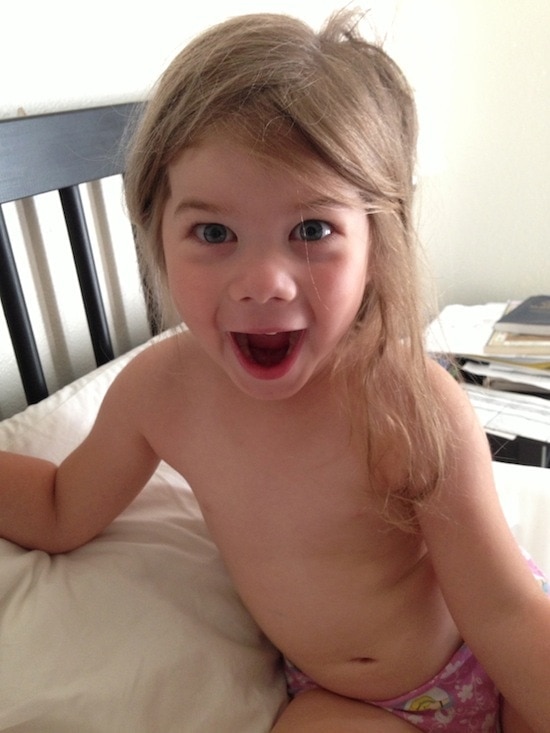 I unofficially weighed Blake on our scale the other day…..16.2 pounds! I told Brooke and this is the face I got with a “you’ve gotta be kidding me!” It’s her newest saying that she literally says ALL.THE.TIME. I chuckle every time. 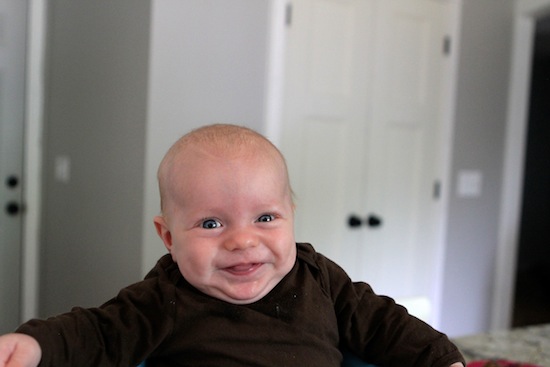 I can’t believe he’s 16 pounds, but I guess the rolls on his thighs are getting large, plus he’s getting rolls on his arms, has a double chin and has 3 rolls on his love handles when he leans slightly to either the left or right. 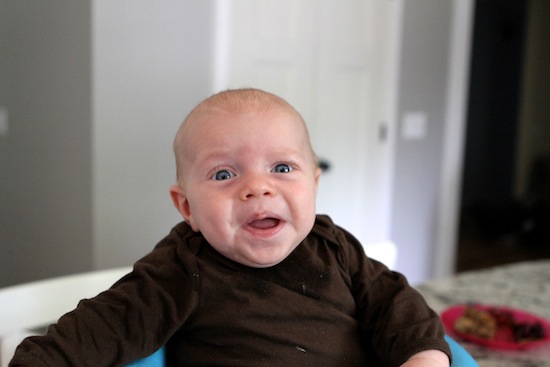 The faces this boy does with his face are so hilarious to me. When he’s rested and fed, he’s such a happy baby. I’m sure most babies are like that, but mine especially!! 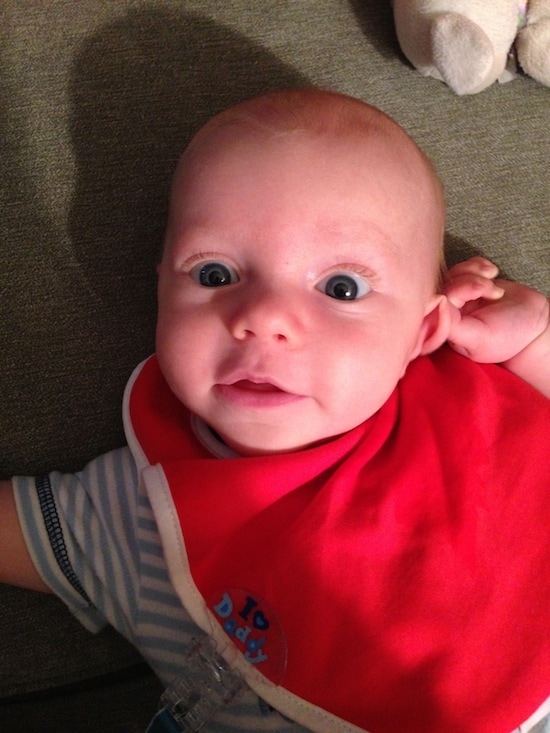 Homeboy is a drool king. I hate throwing a bib on him everyday because they look huge around his neck, but that’s what I need to do so he stays dry!

Speaking of drool, he loves sucking on his fists. This magically doubles the drool that comes out of his mouth. 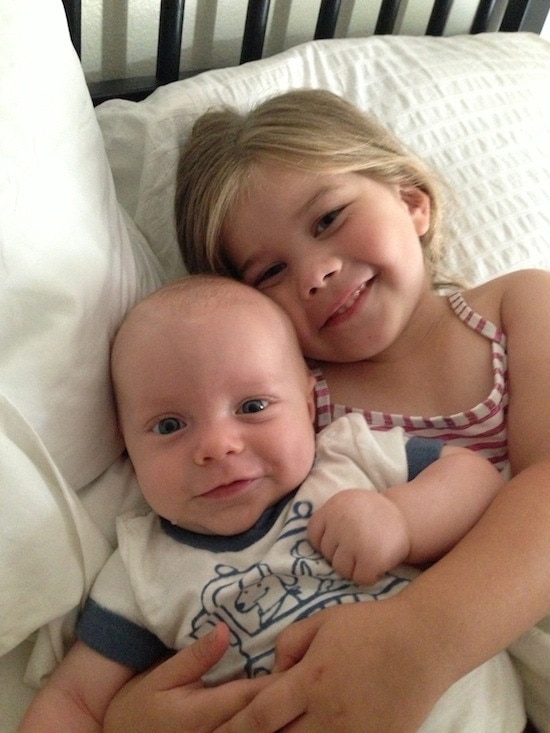 Brooke still loves her brother. We’re still working on the being gentle thing, but for the most part, it’s going well. She always makes sure she gives him hugs and kisses every night before bed. So sweet! She also likes to lean over in the car and hold his hand. It’s pretty adorable if I do say so myself.

Something else worth noting: he’s rolled over twice by himself. Except both times he did it accidentally. I base this assumption on the look of horror on his face once he landed on his back. Like a “what the eff just happened?” look. He also angry yells at me during tummy time. 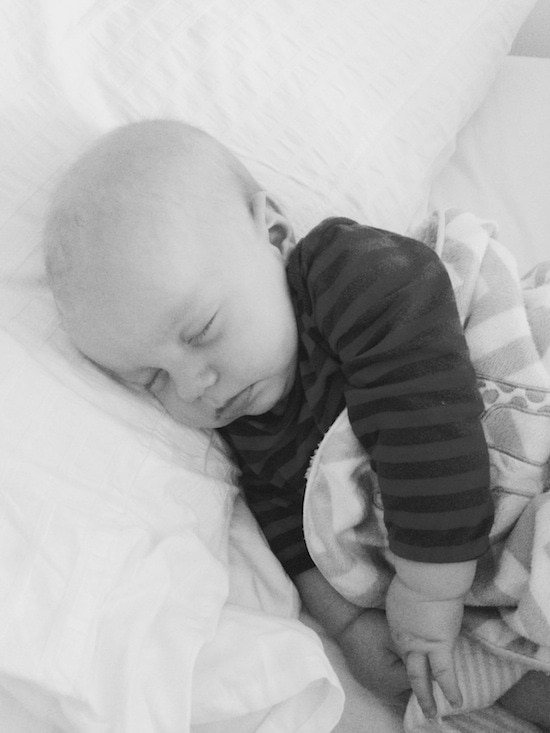 As far as his sleep is going, we’ve transferred him over to his crib in his room and started some sleep training. Blake doesn’t nap through the day, typically. He used to take 2 or 3 20-30 minute cat naps in my arms and that was it! I would seriously accomplish nothing. It was sweet and adorable at first but this momma has things to do! So, I started giving him a pacifier and his little blankie only at nap and bed times. I rock him 5 minutes or so to see if he’s actually tired and then lay him down in his crib. He fusses for a few minutes but then falls asleep! Yesterday he had a 3 hour nap! I could shower AND put on make up! It was glorious. So, I’m now just trying to stick with this schedule. Hopefully he can keep up with his great track record! On average he sleeps 6 hours at night with another 3-4 hour stretch right after. I’m trying to put him to bed a few minutes earlier every night so his bed time isn’t 10pm anymore too. 3 days in and we’re doing great! LOL! I’ll keep you posted on how this goes.

What did you do with your kiddies to get them to sleep longer? Any special tricks?

I’m looking for cute family photo outfits for all 4 of us. Any hints on where to look for this? The outfits need to be somewhat drool-proof. Please and thank you.