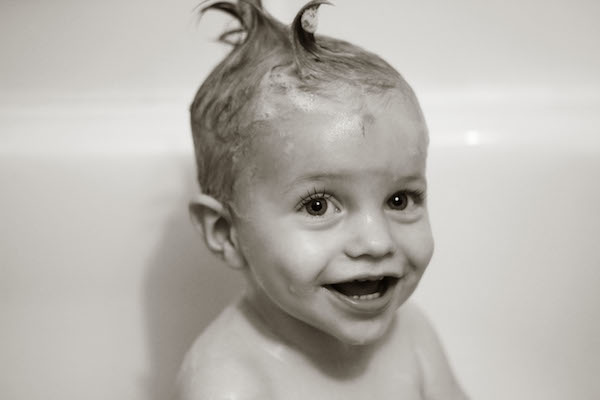 My oh my oh my! My baby is just one week shy of turning 17 months and I tell ya, he’s getting more and more sassy, funny and cute! Here are some of the latest and greatest milestones for my sweet lil’ Blake.

-He is walking like a pro and even runs if the right bait is straight ahead {just food mostly}. It’s so funny to see his little legs go back and forth so quickly.

-Blake is already turning into quite the daredevil. He loves jumping off of things which is both good and bad. He also tries to help me unload the dishwasher and goes straight for the knives. Not quite sure what to think about that…

-For the most part, he will take two naps a day: one longer nap in the am, one shorter nap in the pm. If we’re out running errands and he misses his nap, he turns into the devil himself and just screams. 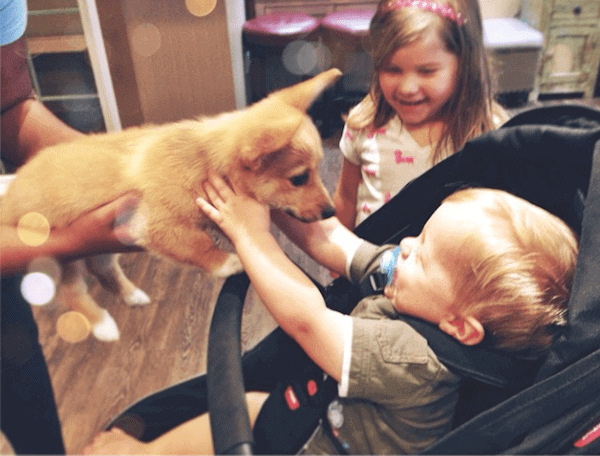 -Blake loves cats and dogs. I snapped this picture the other day and he was absolutely mesmerized by this sweet puppy!

-The vocabulary list Blake is learning how to say is getting longer:

-He will also babble a lot in sentences and gets upset when you have no idea what he’s talking about. Like, he’ll say a lot of strange sounds all put together and then look up to see if we have anything else to the conversation. Lol!

-Blake has mastered screaming the word “no” at the top of his lungs. Usually it’s because we make him use a fork at dinner, or change his diaper or if his sister walks away from him for any reason whatsoever.

-He also knows ‘more’ ‘milk’ and ‘finished’ in sign language. 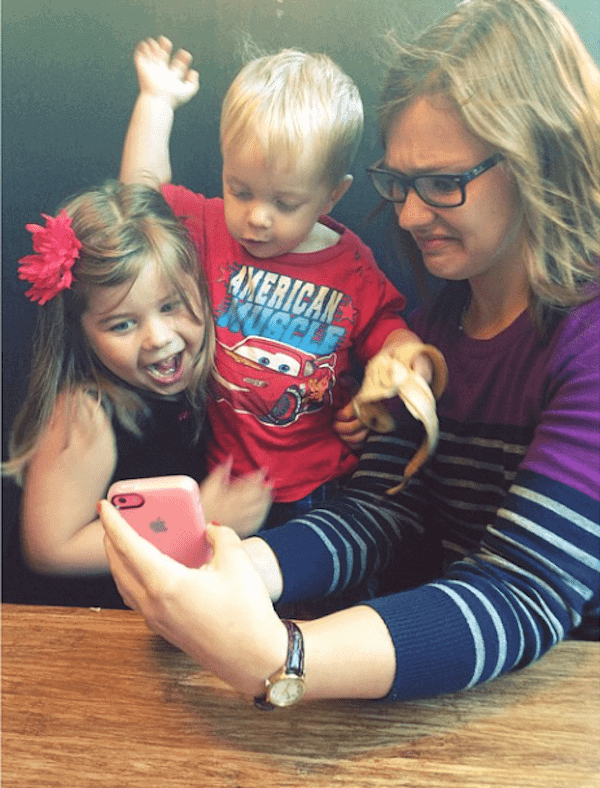 -He has also learned how to hit. I took this picture as his hand was airborne traveling swiftly for Brooke’s head. And most of the time he does stuff like this because he thinks he’s hilarious.

-If we left our doors open, Blake would most definitely leave and take himself on a walk. He loves being outside and on occasion he will walk to the mailbox with me, babbling the whole time. On Saturday, our whole family was working on projects outside. I was picking weeds, Brooke was using sidewalk chalk, Gordon was organizing the garage and Blake was standing on the sidewalk waving to every car that went by. All our neighbors though he was totally adorable.

-Blake is starting to eat more and more like a ‘big boy’ now. I put his dinner onto a small plastic plate for him with little piles of each food. He is much more likely to try everything on his plate than doing it spoon by spoon. It’s messier, but it gives me 5 minutes of peace so I can enjoy a meal too. 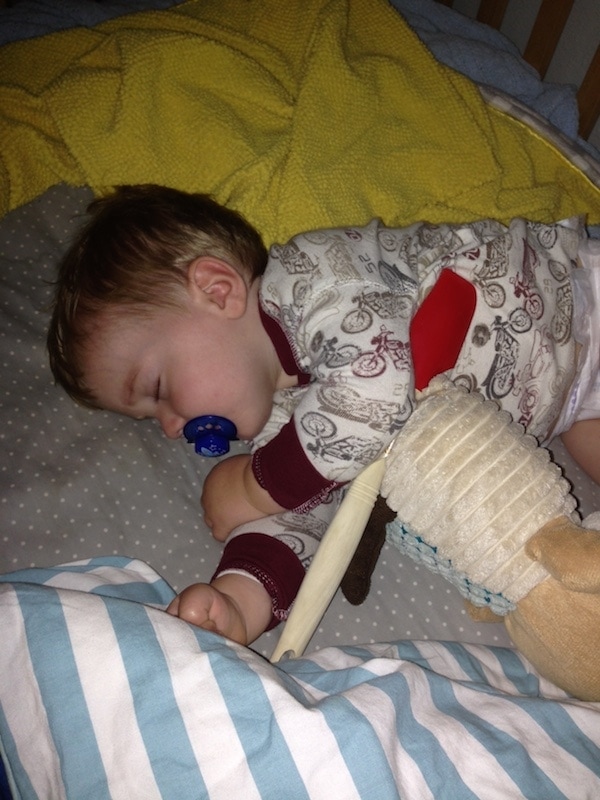 -Lately he’s been snuggling a new stuffed animal called floppy. It’s a perfect size for Blake. He needs floppy to sleep, but we’re starting to move onto any and all kitchen utensils. For the past 2 nights, Blake has slept with a spatula. Before that it was a whisk. And before that was a spaghetti spoon.

-He loves: baths, toy cars/anything on wheels, playing in the toilet water, laughing, following his big sister around, making loud noises in general, playing with bouncy balls, coloring on the magnadoodle,  and tackling his daddy. He will even make noises that a car would make as he’s playing!

-At his 16 month well baby check up he was half an ounce shy of 24 pounds, 31 1/2 inches tall and his head is still in the 97th percentile. He’s a growing chunky monkey, that’s for sure!

– Blake is a great listener! If we ask him to do something, he will follow through and do it! Like “go get your shoes on” or “put this in the garbage”or “go give this to sister”. He also understands and recognizes the names of the rooms in the house, like kitchen, living room, bathroom, garage, etc.

-If you wink at him, he will try to wink back by squinting his eyes. It’s so so adorable!

Overall, things are great and I feel so blessed to have this little joyful baby in my life.