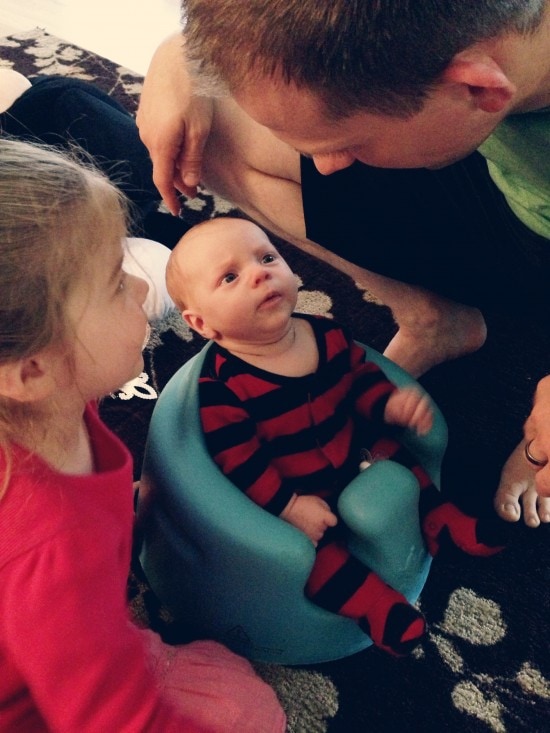 {Be sure to join me and some of my BHG contributors for a Grilling Twitter Party! If you participate, you could win a brand new Coleman grill, or the grand prize – $1000! It’s tonight on twitter at 7-8 CST. Follow the hashtag #BHGGrilling. }

So, I’ve been sort of a slacker on my family page….but it’s only because I’ve been busy with my family! Aren’t they cute?! I think so.

Baby Blake has been a wonderful addition to our family and Brooke has adapted so so well to having him here. No jealously so far {knock on wood}! She basically just loves her brother and wants to squeeze him like crazy….literally. I tell her to be gentle, but she’s starting to forget what that means. Gord loves his little boy and always takes him in the evenings when he’s a little fussy so I can get some work done {bless his heart…}. I forgot to make him a 2 month appointment when I took him to his 2 week checkup, so I’ll have OFFICIAL stats in a few more weeks, but here’s what I know:

-Blakeman has officially grown out of his newborn clothing and is now sporting everything 3-month size. I guesstimate he’s 11 pounds and very long.

-His cheeks are getting bigger along with his double chin and thighs 🙂 I love chubby babies!!

-He’s starting to crack some smiles here and there. This photo is the best smile pic I could snap thus far. He has two dimples just like his Daddy! 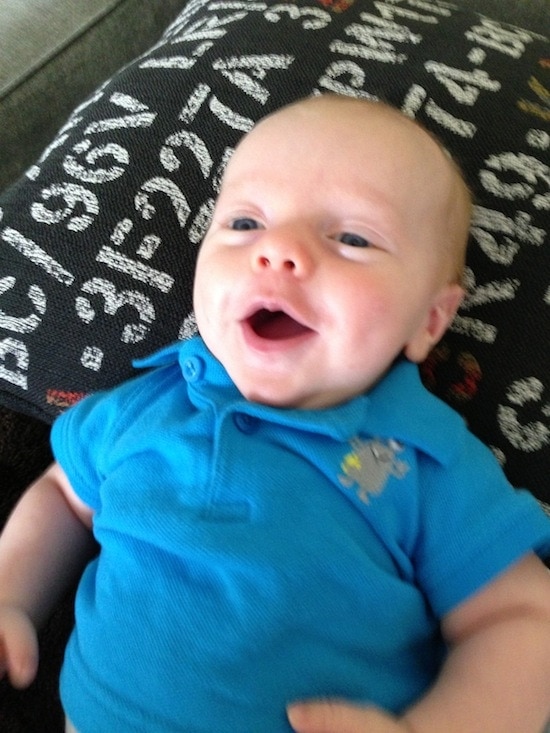 -His eyes are starting to get bigger and bigger and they’re slowly changing into a lighter blue color.

-He can also hold his head up like a champ!! Boy’s got some serious neck skillz.

-He hates tummy time and even rolled over to get out of doing it! I think it was just a fluke thing, but I’ll keep you posted. 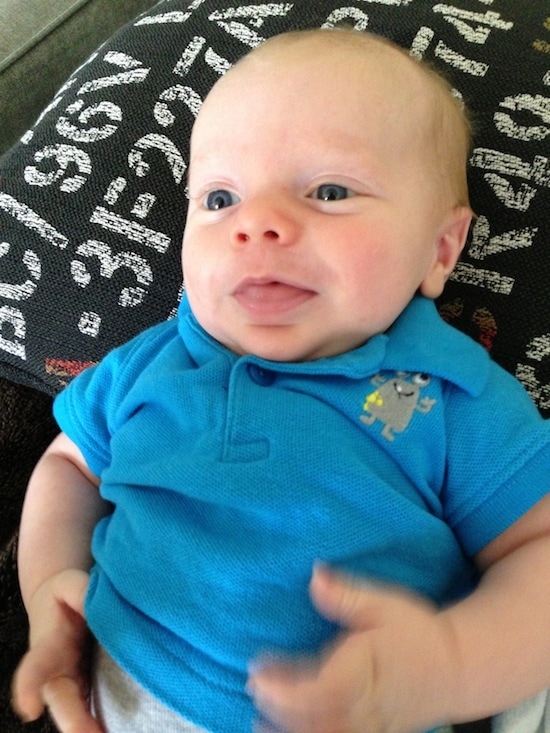 -When he was first born, I had no idea who he looked like. I certainly thought he was completely different from how Brooke looked when she was this young. WELL, turns out they’re a lot more similar than I thought. Isn’t this crazy!! 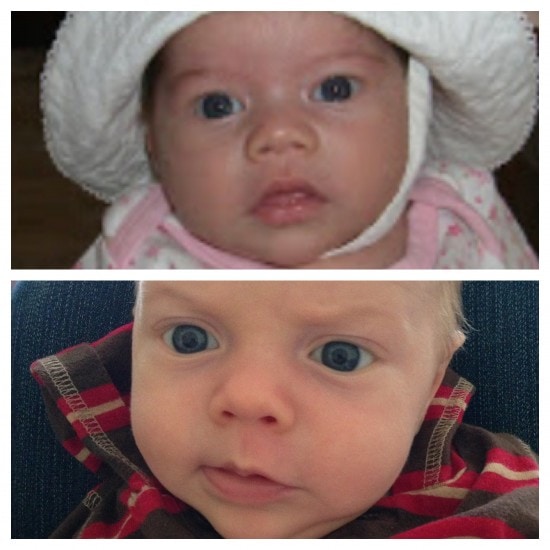 -Sometimes Blake hates his sister. The stuff he has to put up with sometimes makes him hate his life. Having bubbles in his tummy, trying to toot out his farts and his sister are things that sometimes make his suuuuuper cranky.

-His hair is mostly blonde, but in the right light looks red!! This comes from my husbands side of the family. Wouldn’t he be so cute with strawberry blonde hair?! I think yes. 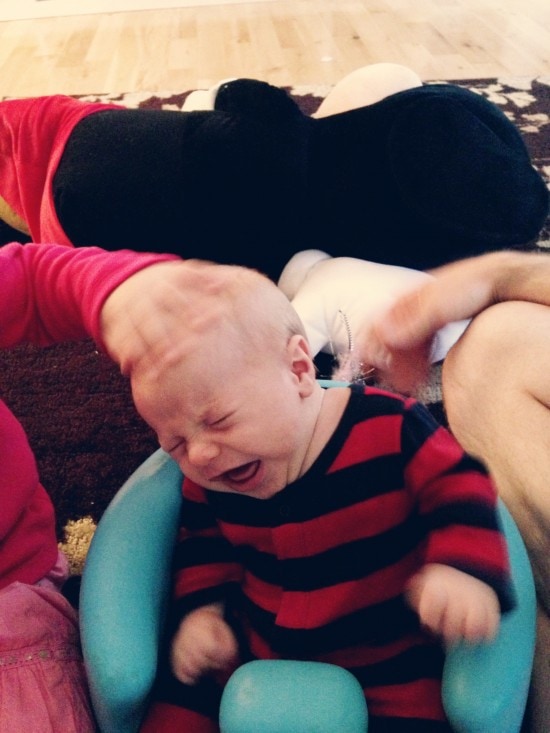 -Blake is slowly getting used to his car seat. He used to hate it, but now that he’s a little bigger and on more of a set schedule, he does better in it.

-The sleep situation is going really well. I get on average a 5 1/2 hour stretch of sleep followed by another 3 hours or so. It’s lovely and a whole lot more than I ever got from Brooke at this age. But, I also think I’m adapting a lot quicker to a lot less sleep. I feel exhausted by 6 pm, but at least I have energy for the majority of the day. 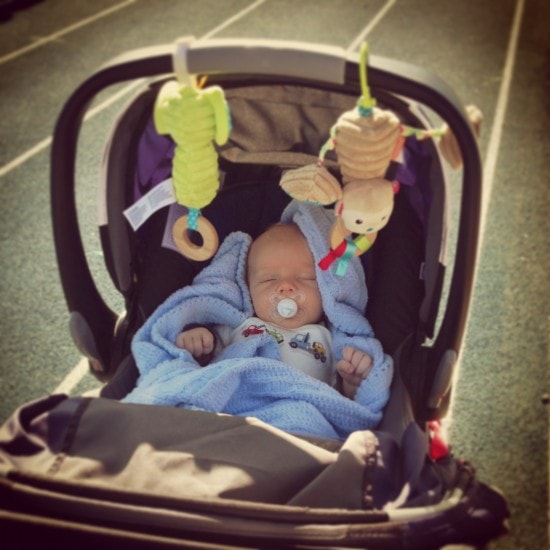 I weighed about 10 lbs less than I did when I delivered Brooke. I lost a big chunk of that in the first 2 weeks after giving birth. Now, things are tapering off slowly. Right now, I weigh about what I did when I got pregnant with him….maybe 2 pounds less?! This is great progress, but I’m soooooooo jelly-ish. Nothing is toned and my love handle situation is out of control. SO, I’ve started meeting up with a few friends and we’re running the track at the high school. I used to be a big runner, but then stopped once I got pregnant. Mainly because I was too sick/tired to get out of bed. So now I’m trying to get back on the horse. I’m not pushing myself as much as I probably should, but I’m ok with that.

I average about 1 lb of weight loss per week. And this is with NOT cutting out treats, but drinking a butt load of water and getting my fruits and veggies in. By default, I’m less likely to have a treat when I drink enough water/eat the healthy things I should.

I should also note that Blake has a sensitive tummy, so I don’t typically have any chocolate, dairy or spicy foods. That really REALLY helps with the weight loss.

I’ve started logging my foods into the MyFitnessPal app and allot myself 1700 calories. I usually go over by 200. Meh.

As you can tell, I need a little motivation!!

My goal is to be down 8-10 pounds and running up to 5 miles by the time Blake is 4 months old and starting rice cereal. Once the solids start, my milk production sort of slows which means my weight loss slows too. I need to get going.

Feel free to leave any healthy snack ideas, motivational quotes or any weight loss tips you have! Any and all are appreciated. Thanks, friends!