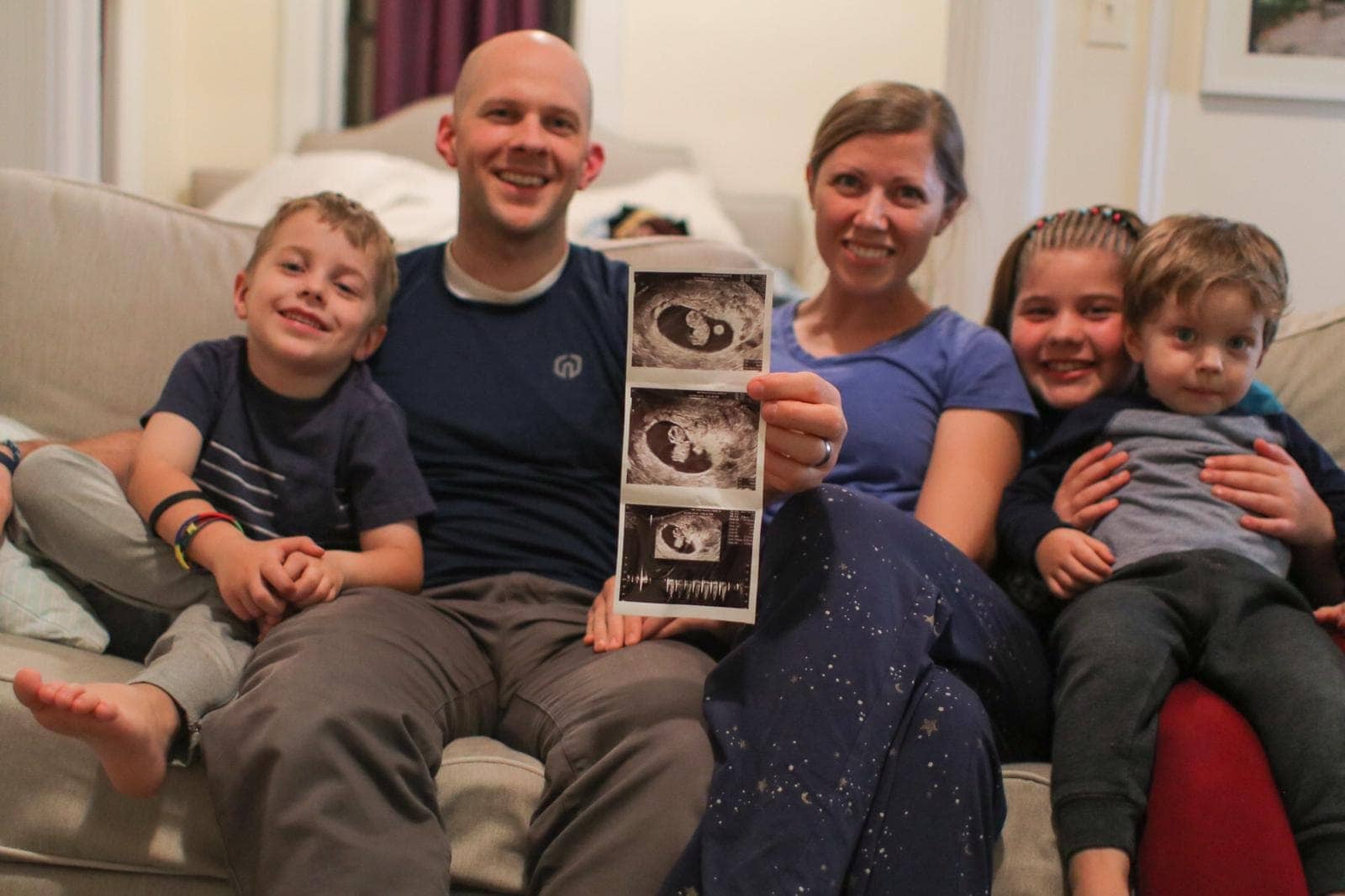 Well, if you don’t follow me on Instagram or Facebook, you probably haven’t heard the good news that Gordon and I are expecting our fourth child! We are so so thrilled with this news and so happy to share a few more details of the pregnancy with you today.

This story starts waaay back in September of last year when I started taking fertility medications to try to get pregnant. I had new doctors in the city, so they were going off of my old records with the previous doctors I had in Portland when I got pregnant with my boys. I got my medication and off we went. Problem was, month after month, my body was just not responding to all the medications like they once used to. It had been nearly four years since I took my last round, so I expected there to be some differences, but the exact same dosages were feeling so different in my body. After three rounds of fertility medications, I was done with them because I just felt terrible on them. Plus, they obviously weren’t working.

So, end of November-beginning of December time, Gordon and I decide to end these medications and plan on only having three kids. Three is a nice number! We can still fit in a small car with three kids! We are used to three kids! Three kids are cheaper! We can stay in our apartment with three kids! But there were obviously other plans in the works here.

The beginning of January, Gordon and I did our no sugar challenge but by the end of the month I was feeling funny. Not sick or nauseous, but different. And this feeling would come and go. Most of the time I just felt totally and completely fine! Like my normal self. I shrugged it off and thought it had to do with the no sugar thing.

A week later, I had this weird feeling again, so I decided I would take a pregnancy test just to confirm that I wasn’t pregnant and could rule it out. Talk about a surprise. The test turned bright pink immediately. I snapped a picture and sent it over to Gordon who was at work and we both were completely dumbfounded. Like “I obviously wasn’t taking fertility medication to get pregnant, so HOW did I get pregnant?”

I called my regular OBGYN doctor and made an appointment to confirm the pregnancy. They took a blood test  and urine sample and she decided to just do a quick ultrasound for a quicker result. (She totally thought I wasn’t pregnant.) To her (and our) shock, I was already 8 1/2 weeks pregnant…and still feeling totally normal btw. She was like “oh look, there’s the heartbeat” and we were like “HEARTBEAT? Wait, what?” Completely shocked.

We walked out of the doctors office with the cutest little sonogram pictures and a due date of September 17th. We have continued to keep this little miracle under wraps until I was further along in the pregnancy. We, of course, told our families several weeks ago along with a few close friends who could keep a secret. Ha!

Between 9 and 12 weeks, there were only a handful of days where I felt completely exhausted and had to nap and only once do I recall eating something that turned my stomach. Oh, and on the last night of our cruise when the sea sickness really was making me nauseous. Other then that, I’ve been totally fine. I haven’t felt like I’ve been pregnant this whole time. Obviously, my pants hardly fit now and I have a belly, but besides those obvious indicators, things have been smooth sailing.

So currently, I am in my second trimester and am feeling relatively great. Still sometimes need to lie down in the afternoons, but haven’t thrown up or felt gross at all. Haven’t had any cravings with the exception of onion rings one time last week and V8 this week. That’s it. This baby is taking it easy on me.

I ordered some maternity clothes just to get me to summer at which point I’ll switch over to t-shirt dresses and flip flops all day every day. July and August miiiight kill me because I’m going to be so obnoxiously big, but I’m hopeful that I can keep the weight gain under 30 pounds, since I’m still seeing my trainer and working out 4ish times/week. (With Brooke I gained 50 lbs, Blake was 40, Eddie was 30, so I’m on the downward trend.)

Our doctor recommended we do all the genetic testing and everything has come back perfectly. Baby is 100% healthy and continues to grow right on track. And because we did all that testing, we know the gender of the baby and are so so happy about it. Not sharing that little detail quite yet with you all, but soon you will know 🙂

So between the baby and the move, we are elated with the new life changes coming our way. One of you readers mentions how blessed we are and that’s exactly how we feel. So thankful to God for allowing us to get pregnant without the fertility medications and having been able to find an apartment we can afford that will give us room for another little human. We are so grateful we can see God’s hands in our lives as things fell into place for our family. Even though New York City isn’t our favorite, we know we are supposed to be here and God is helping us along in our journey.

So, thanks for sharing our joy with us. We can’t wait until September!