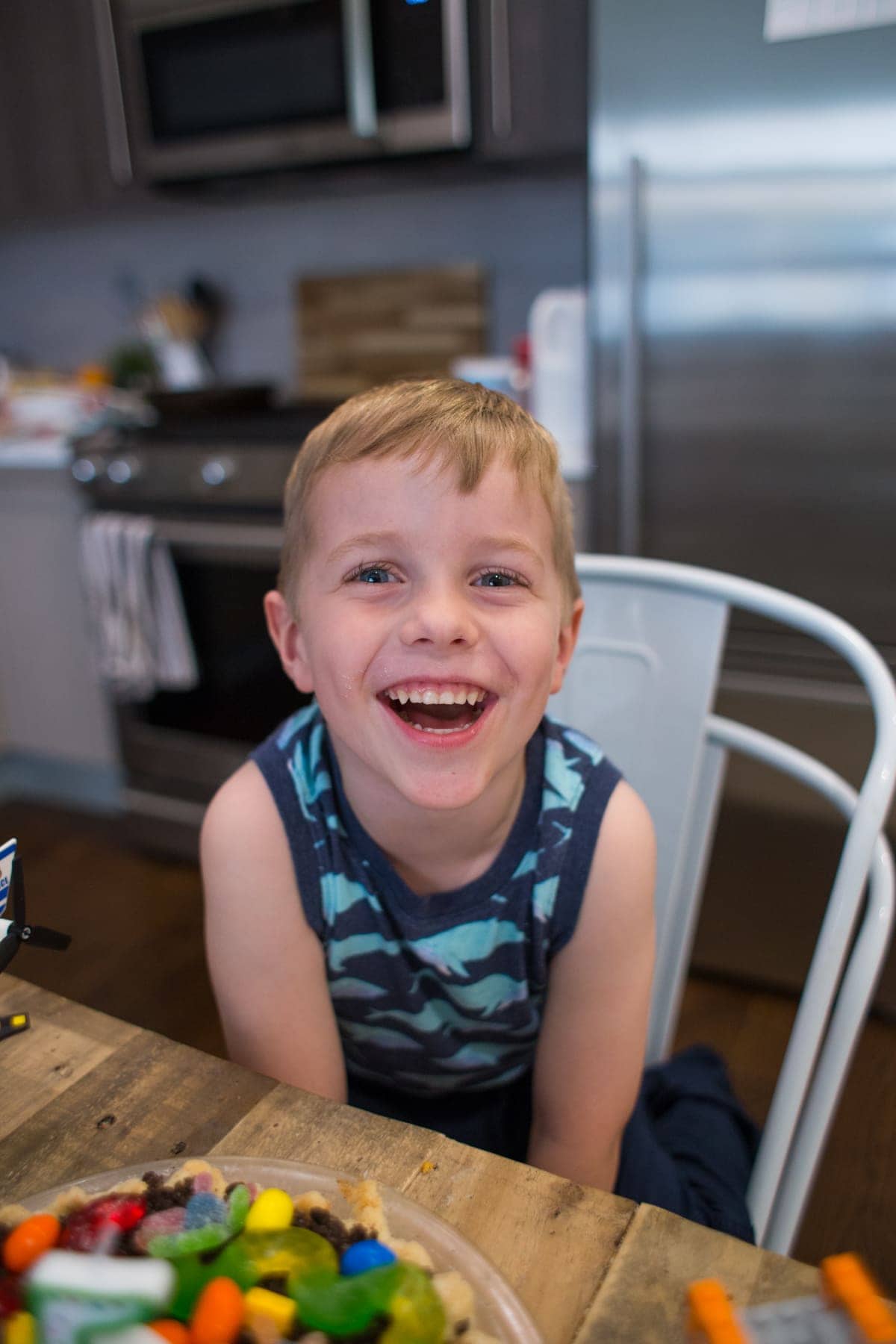 Blake Blake Blake, where can I even begin? This boy has been such an easy-going, silly, joyous, free-spirit since I brought him home from the hospital. He was and continues to be such a good boy, such a good sleeper and feels every emotion so deeply, just like his Daddy. He definitely has his cute and sometimes frustrating quirks, but after the 4 years it took us to get pregnant and bring this little boy into the world, we will take him, quirks and all!

He used to hate hate hate getting his hair cut. He used to love it and laugh his way through them, but one time, my mother-in-law accidentally clipped his ear and he’s never been the same since. We couldn’t really take him to a barber EVER because he would scream and cry and make us look like stellar parents. So, I bought some clippers myself and started cutting his hair at home. Well, this last time, Gordon bribed him with ice cream (“if you don’t scream or cry or yell or push mommy away, we will let you eat as much ice cream as you want when you’re done”) and IT WORKED. He sat perfectly still, watching a show on my phone and it was the best haircut I gave him, probably because he stayed in one spot the whole time. Haha! But hooray for getting older and maybe slightly more mature 😉

Loves rice, hates pasta and tomato sauce on pasta. Doesn’t really care for meat either, because of the texture. We have yet to find a fruit he doesn’t like and also particularly likes goldfish crackers, yogurt, apples & peanut butter and pizza.

He probably would forget to eat if we didn’t remind him, because he’d rather be playing. It’s normal for him to be eating and then get up from the table to grab a toy and continue playing. He distracts easily because his legos and toys are just about the only thing on his mind.

Blake happens to be a typical boy, loving dirt, balls, sports, running, jumping off of things, scootering, playing at the park, building and rebuilding with legos, dinosaurs, monster trucks, cars, big animals, etc.. I love how active he is, going from one thing to the next. His imagination is incredible.

He plays hard and seems to add holes to the knees in all of his pants, even his church pants (HOW?) I had high hopes of keeping those pants for Edward, but there’s just no point anymore. I find myself throwing out pants every few months because of all the holes!

Can spell his name and a few other select words, like “mom” “dad” “dog” “cat”…things like that. Can also count to 100 and is starting to read!

He happens to love lego books and a few select others. If you’re reading the books he likes, he will sit still and listen forever.

He doesn’t love dunking his head underwater, and still is super hesitant of swimming in general, but can hold his own with a few pool noodles, which is a big step in the right direction. We’re working on that with him.

He seems to make friends with everyone and doesn’t get bothered if no one is playing with him because he can just play with himself. Brooke is the total opposite of this. Not sure if this is a boy thing or a Blake thing, but I really appreciate it.

Someone not sharing their toys with him will make him upset as will mean words from his older sister or a few smacks from his younger brother. Poor Blake is the agreeable middle child who gets pushed around sometimes by bossy siblings. Of course the other two get in trouble much more frequently than Blake, but he is slowly learning to stand his own ground which sometimes means hitting back. Proud that he’s standing up for himself, but a little concerned. Haha!

We always try to give Blake one on one time because he isn’t like the other two and doesn’t demand it. But I will specifically take him out to do special things as will Gordon.

We love you Blake and are so glad you’re in our family!!