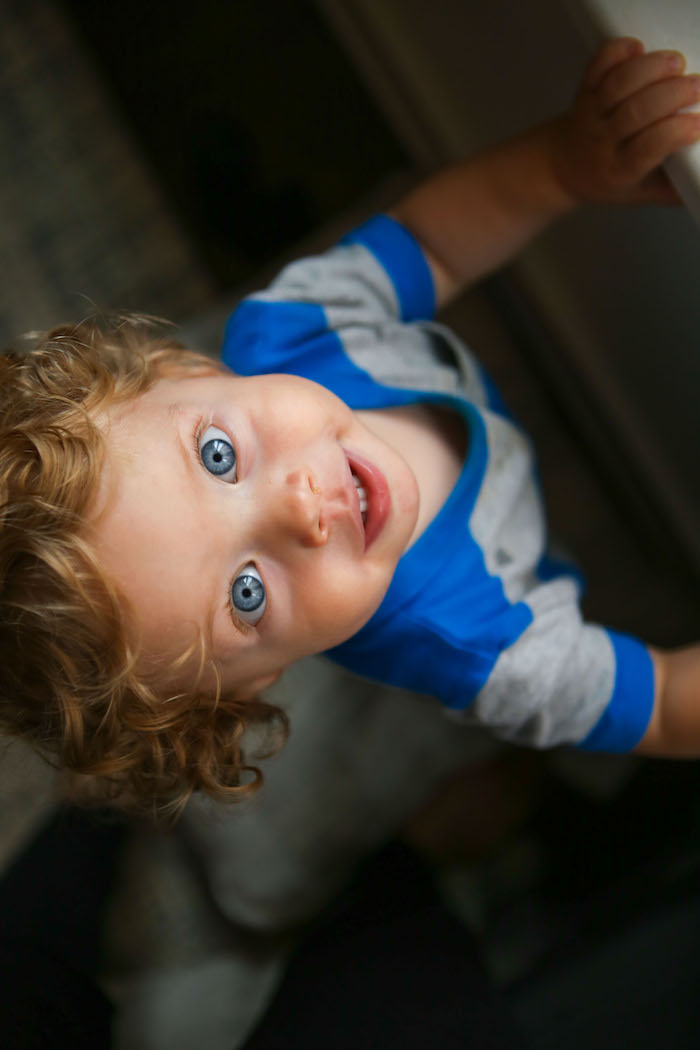 This boy is exactly 18 months TODAY!!  I can’t believe that a year and a half ago, I was in the hospital with him.

This boy continues to amaze me! He will eat and love everything my other kids hate. Tomatoes, for instance, is one of his favorites. Pasta, rice, cucumbers, carrots, cereal, oatmeal, yogurt, pizza, waffles, bananas, peaches are some of his favorites. He also does not like cheese crackers of any kind. Brooke and Blake LOVE goldfish crackers, but Eddie just throws them and wants nothing to do with them. Also, ice cream isn’t his favorite either. I think it’s too cold?

He’s a little more adventurous too. If I put something new in front of him, he will always try it. He also LOVES to dip. Anything to dip into anything is his JAM. Fries into ketchup. Pretzels into hummus. Crackers into egg salad. You name it, he will dip it!

He is still on the small side, but I think thats more related to genetics and not because of his hearty appetite. 😉

Eddie was in a pack n’ play for the last few months since I sold his crib in Idaho (no room in our NYC apartment!) and packed up and moved. Once we got the triple bunk bed together AND got a bed railing for it, we were ready to make the switch. Since we have done that this past week, we have had lots of success with his sleeping in general! I think the soft mattress and the larger sleep space are working towards his favor.

Right now, he will take a long morning nap (2 hours) and a short evening nap (30 minutes or so) and go down for bed at 7:30 and sleep until 6am. Sometimes he gets up at 4:30, sometimes 5:30, but the past few days its been right around 6. I think that’s normal? I’d love for it to be a little later, but its not in the cards for me right now. I’m just glad he’s mostly done with the night wakings. MAN, that was a long 14 months of my life. Cross your fingers that there aren’t any regression. 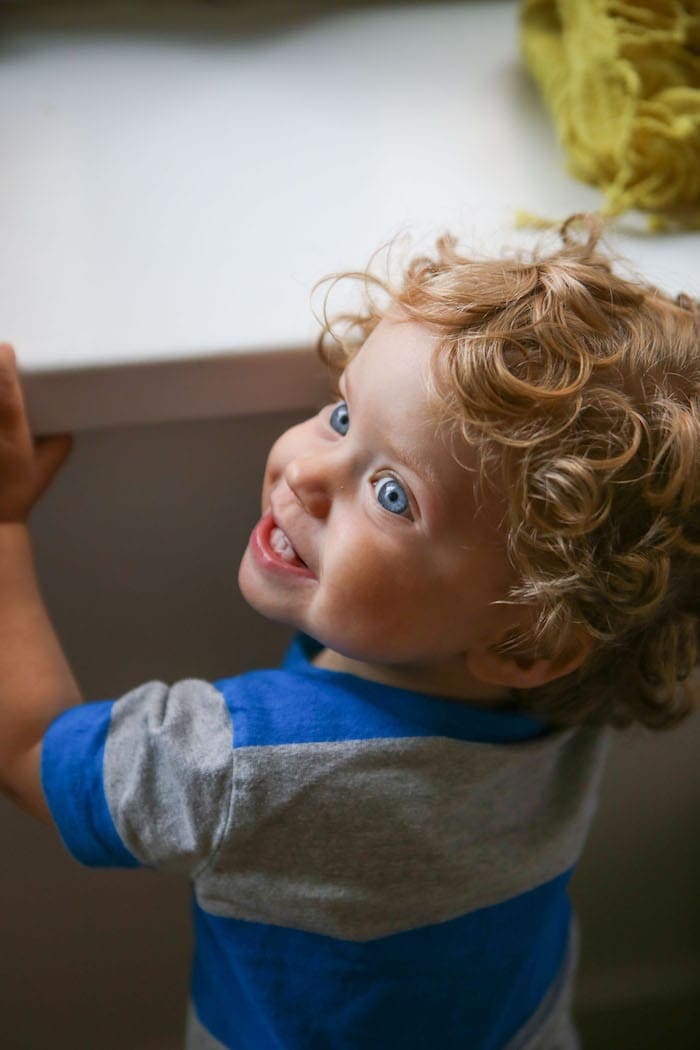 He has a temper! If he doesn’t get his way, he will let you know about it immediately.

He’s started pouting and its so darn adorable!

He’s a total TOTAL mama’s boy, though loves his Daddy oh so much when he sees him on the weekends.

Still hasn’t said too many words, but is really good at pointing and asking “dis? dis?” (aka “this? this?”)  and saying “yes” and “poos” (push). He babbles a whole lot, and talks jibberish like we know what he’s talking about, even though we don’t. The pediatrician here said she’ll be referring us to get his hearing checked just to verify he’s hearing all the different tones and sounds there are to hear. The many ear infections he’s had sent up a minor red flag so she’s ruling this out before exploring other things. She said he can obviously hear, we just want to see how well. So that’s kind of interesting. (I really really like our pediatrician.)

When he really wants something, especially when we’re eating, he will sign “more”. He’s got that one down.

We have a green blanket that he cuddles up with during nap and bed time and he’s grown to really really love it. I did a similar thing with my first two kids and they didn’t really care too much about the blanket, but Eddie definitely has an attachment to it I’ve noticed.

His curls continue to stay very curly! I’ve given him a hair cut already, and nothing has really changed! It’s so so fun!

He loves “wrestling” with Dad and getting thrown up into the air.

He’s starting to climb anything and everything. The kitchen cabinets in our apartment have long handles and he will hold on with both hands and scale them! It’s so nuts!

His laugh is contagious and he loves being with his brother and sister. He doesn’t like feeling like he’s being left out. A few times I’ve had to fight him to buckle him into the stroller, but be wants to walk with us.

He’s starting to run!! It’s both equally cute and frightening (because I think he’s going to fall).

Loves to brush his teeth and will death roll his way out of getting his diaper changed. It’s real fun when you’ve got a code brown situation to take care of. 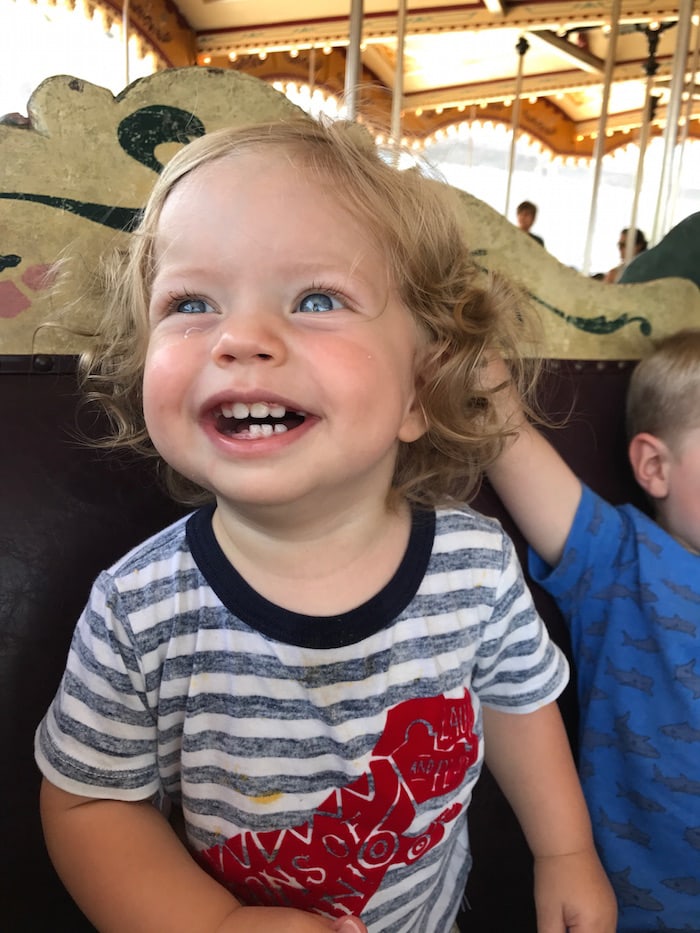 I’ve said this before and I’ll say it again. Eddie has been my toughest baby. The extended lack of sleep really threw me for a loop and made me a little bitter. But now that things are getting better in the sleep department, I’m mostly out of the fog and can see just how much of a blessing this sweet angel baby has been to our family. We love you Eddie, regardless of how much you sleep! (Though, I wouldn’t mind if you slept until 7 like your other siblings 😉 )