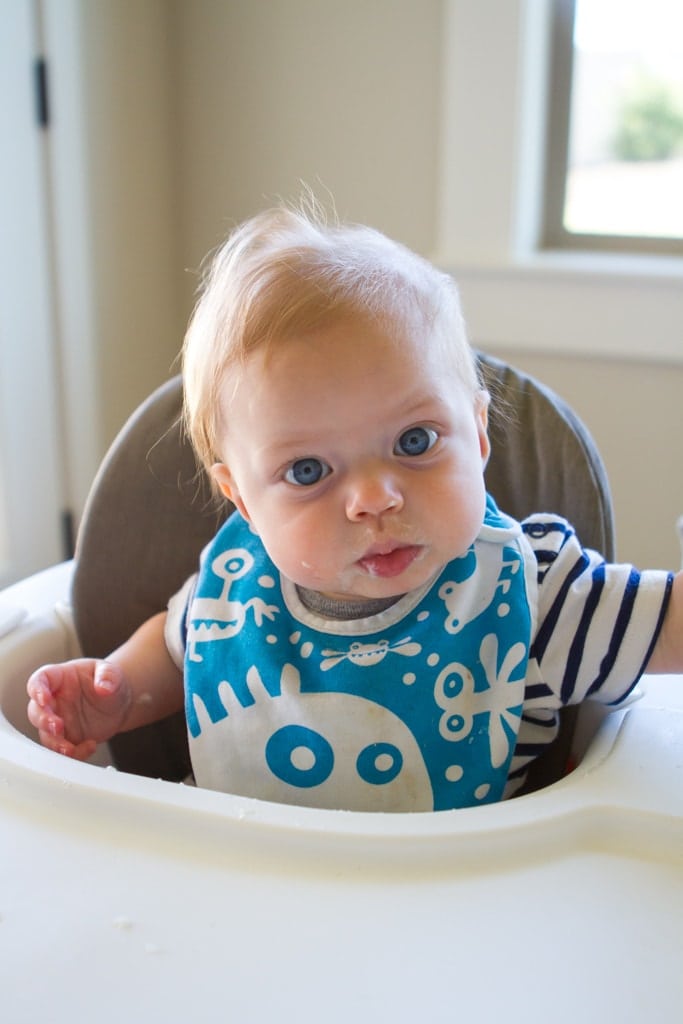 We’ve introduced rice cereal to this little munchkin and he is IN LOVE with it. After just a few feedings, he is a pro at opening his mouth and swallowing all his food. I knew he would love it because of how longingly he looks at me eating my food and how active he gets in trying to reach for my fork. We will feed him a small amount of rice cereal once a day, usually around dinner time. We will most likely introduce some vegetables in the near future. My two other kids always loved sweet potato and butternut squash.

Nursing-wise, he is still eating every 3-4 hours. The pediatrician wants me to throw in an extra feeding because he is on the smaller side, but I mostly just nurse on demand, and figure if he’s still hungry, he will let me know. I think the additional cereal and fruits and veggies we’ll add in will all help the cause. 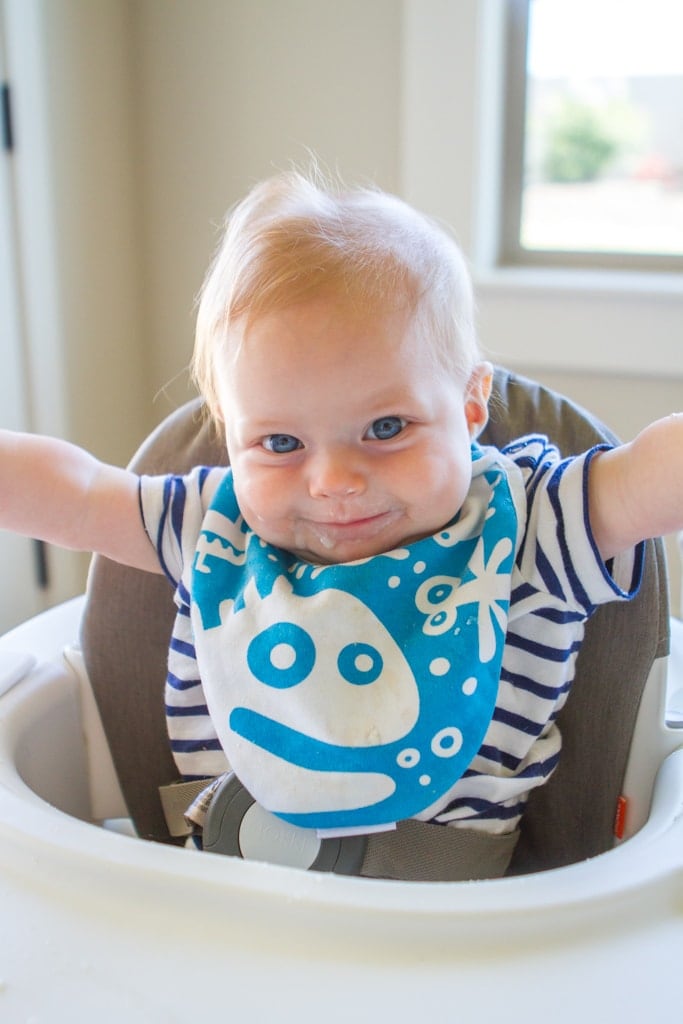 Naps are still a struggle. We try to get 2 good naps in during the day and will lay him down when we know he’s tired. Sometimes if we get lucky, he will fall asleep relatively quickly. Other times, he just doesn’t want to sleep and screams the whole time. What a little rascal! I think he is generally getting better at napping and the tables are slowly turning towards more naps, even if they aren’t as long as I’d like.

Night time sleeping is pretty good. Lately, he’s been going down between 7:30-8:30 and sleeping until 2. Then he’ll have a quick snack and go back down until 4 and then up for the day around 7 or if I’m lucky, 8. He used to sleep through the night last month, but has digressed because he will wake himself up because he rolls now!! 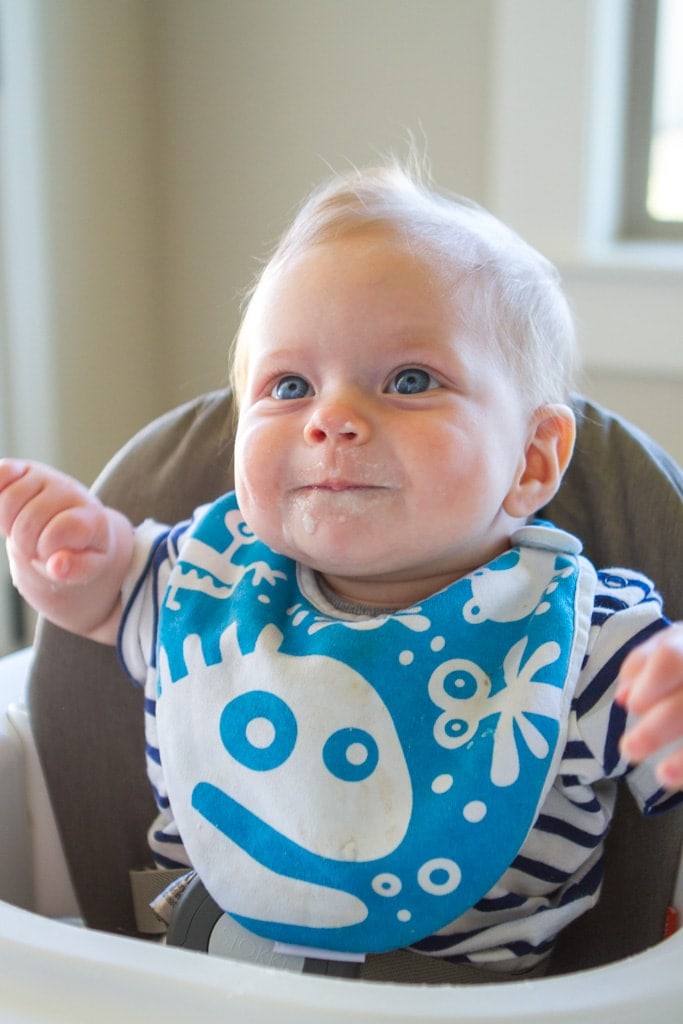 Like I just mentioned, Eddie his rolling! He is really good at rolling from his back to his tummy, not so good rolling back. Tummy time still isn’t his favorite, though he can tolerate it for a good 10 minutes or so before screaming. Ha!

He wakes up super happy in the morning and kind of gets crankier as the day goes on because we haven’t mastered the naps. He babbles throughout the day and tells anyone who will listen all about his life.

He will jump and usually cry if he hears loud noises that scare him.

So, that’s Eddie in a nutshell these days. Even though its taking him a bit longer to figure out the sleeping thing than my first two, we still love him to pieces! Plus, hello?? He’s the cutest baby ever. Ha! 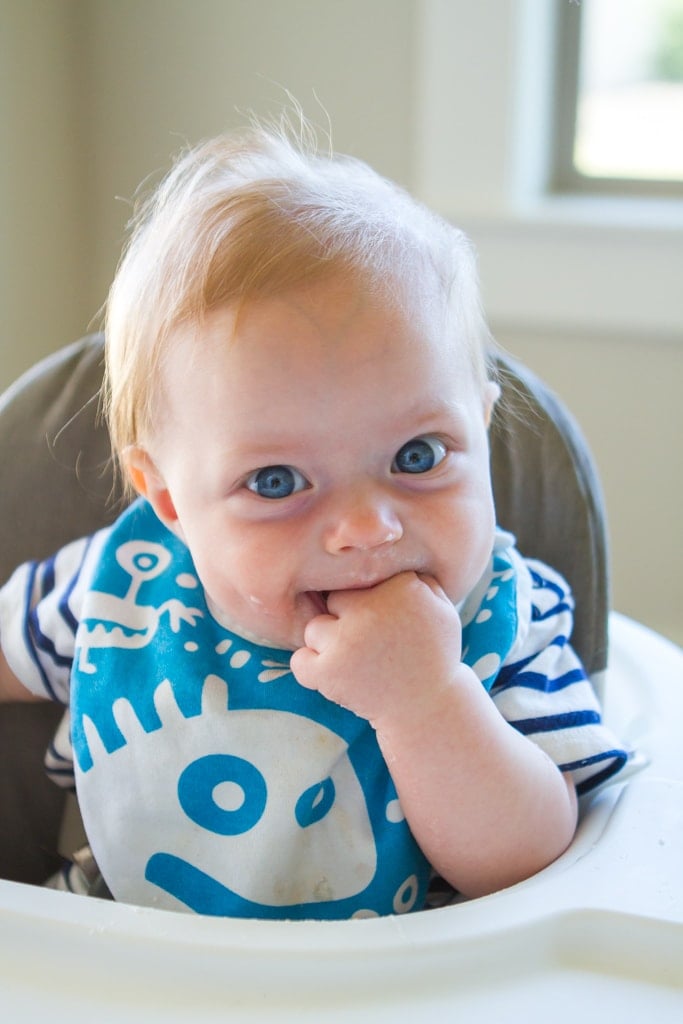 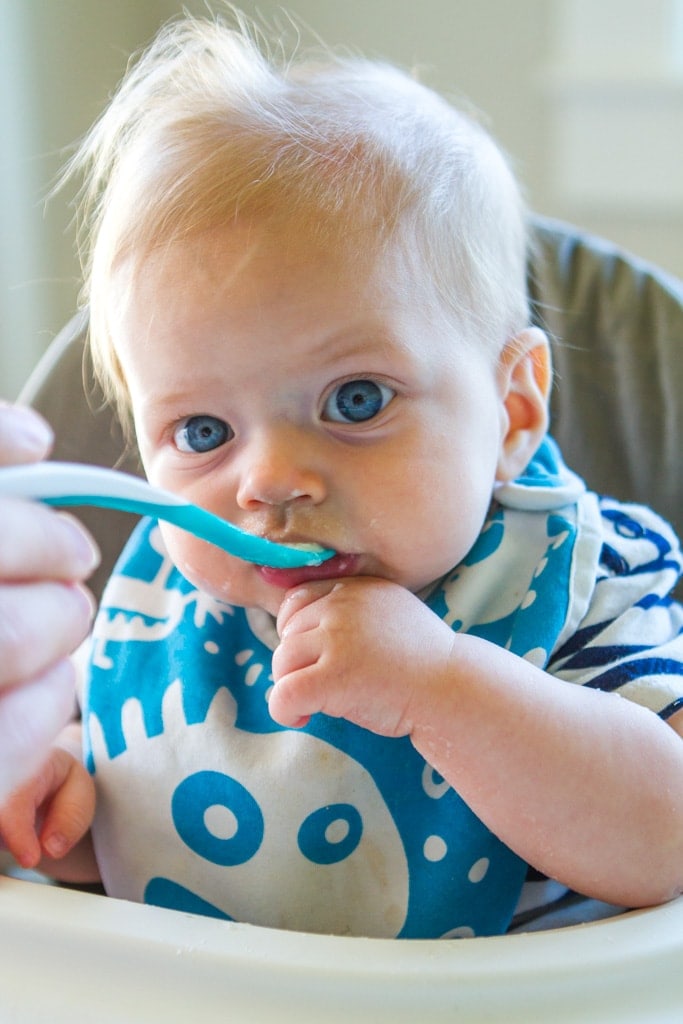 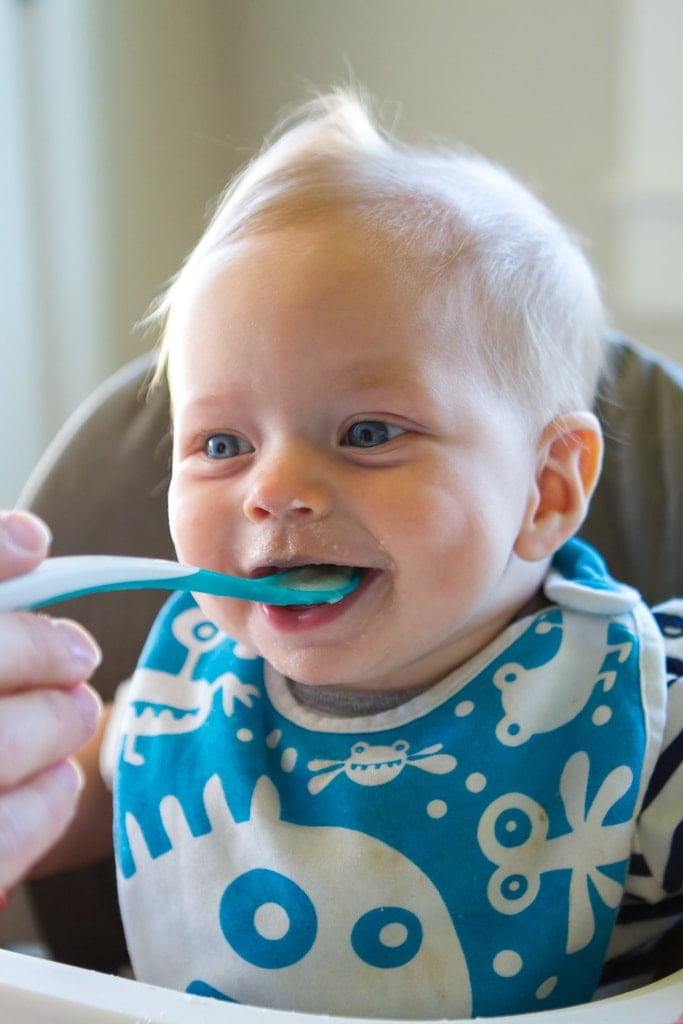 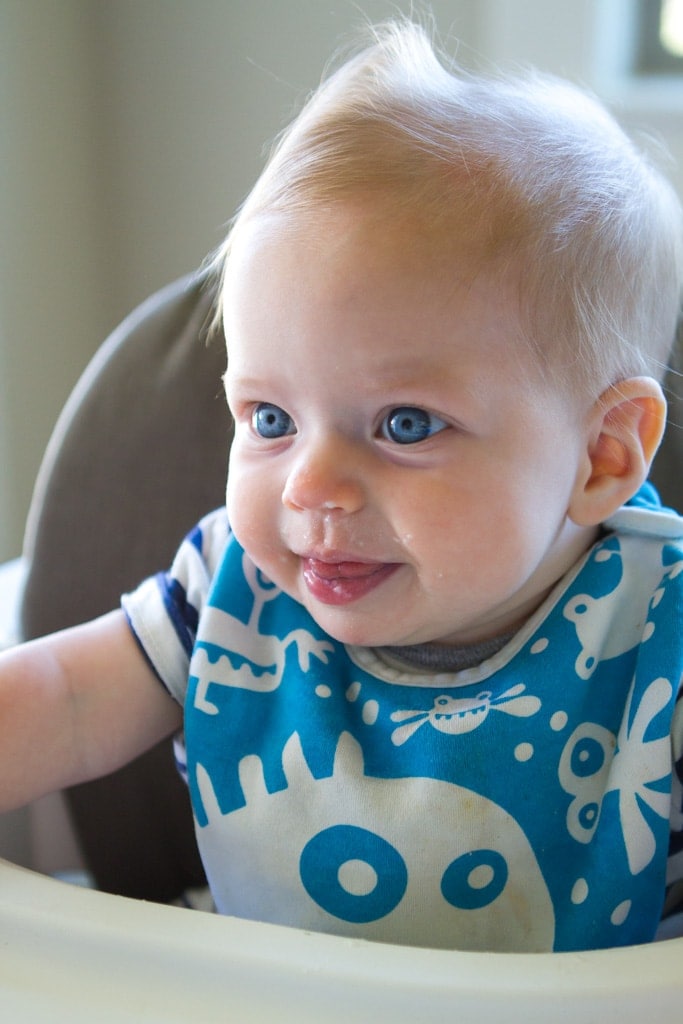 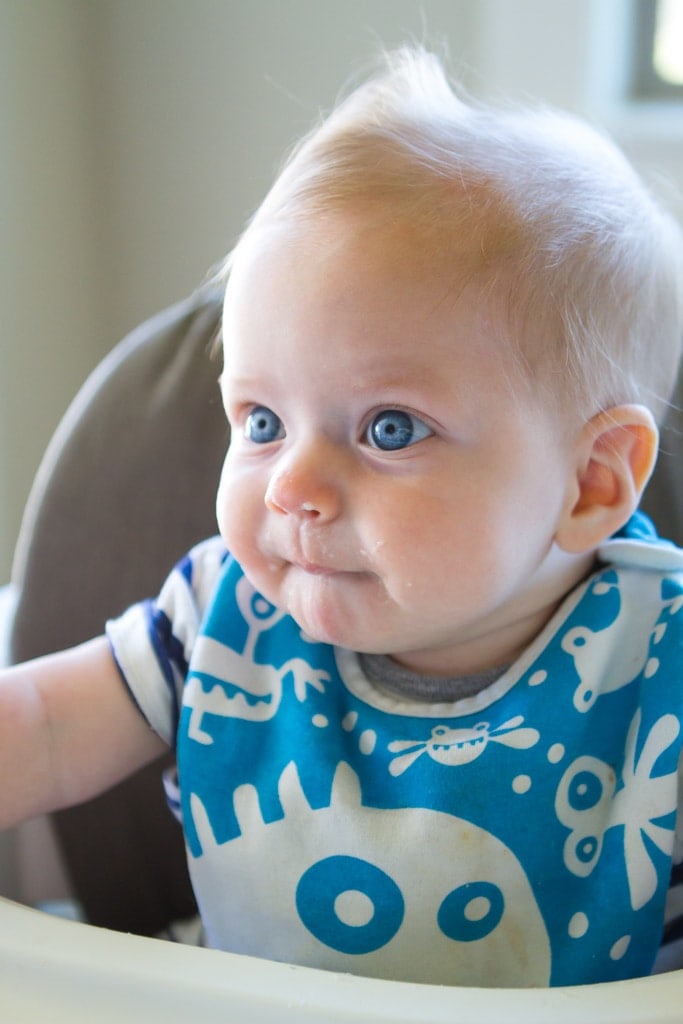