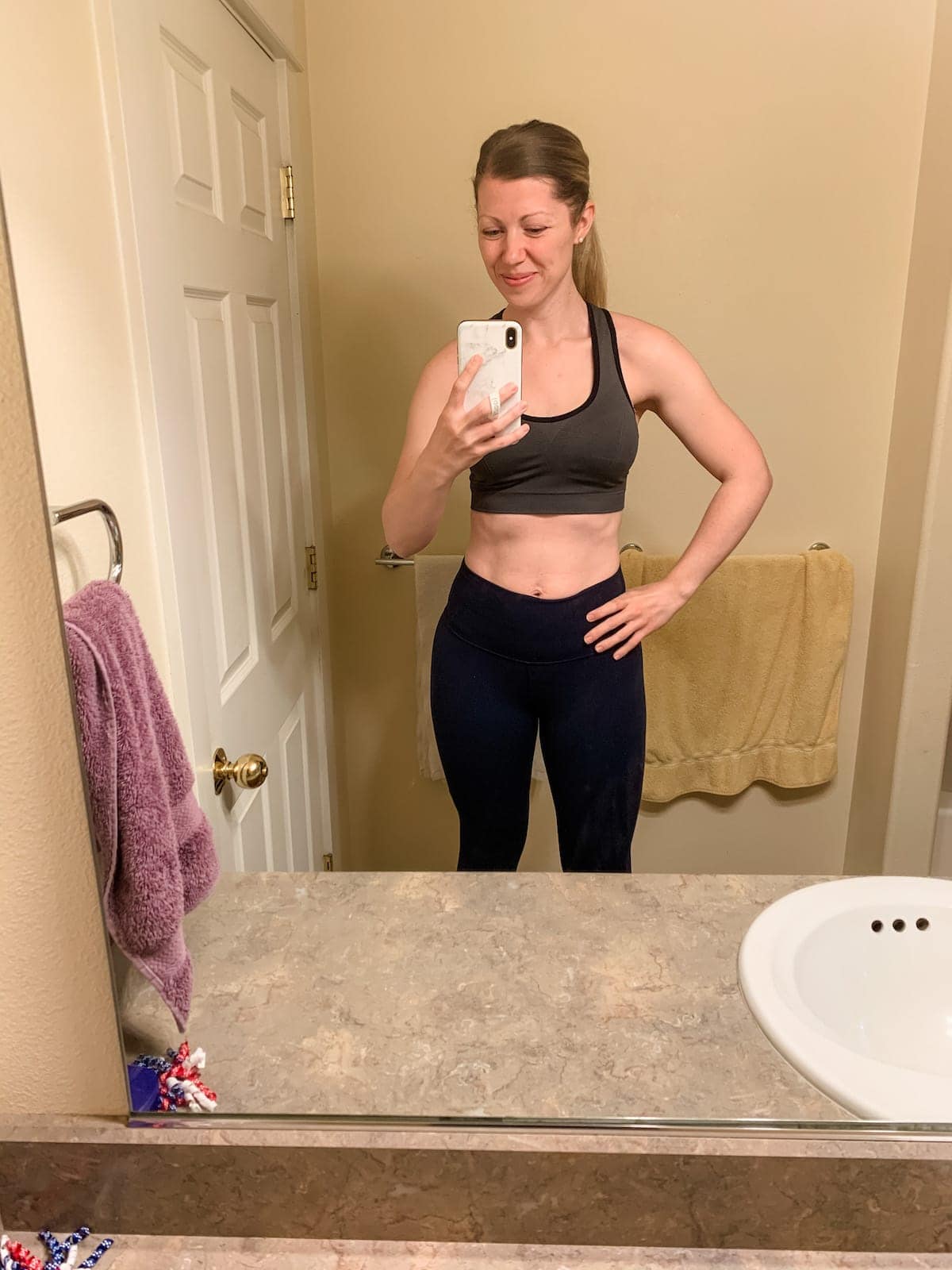 Hi friends! After receiving lots and lots of requests and questions about what I’ve been doing to get back into shape after having Porter, I decided to write a post about it in hopes of answering all of your questions.

So, to give you an idea of where I was starting from, I gained about 35 pounds with Porter, my fourth baby, and when all was said and done after 3 months of having him and the dust had settled, I was still about 15 pounds above where I wanted to be. A good chunk of that weight loss came in the first month of my body just getting rid of the extra fluids and me breastfeeding and burning more calories. After two more months, the needle wasn’t moving anymore and I was 15 pounds heavier than my pre-pregnancy weight. I didn’t look like I had a ton to lose, but I know I lost quite a bit of muscle mass and obviously picked up some fat.

From December to March, I didn’t want to really do anything crazy with my diet in hopes to keep my milk supply up but after 6 months, I had to start supplementing formula because Porter just wasn’t interested in nursing and wasn’t getting enough calories. Once he had been weaned completely, I was able to dial in my diet and start with my marathon training. My marathon training started March 2nd and my diet change started a few weeks later.

I found out at the end of February that I got selected to run the NYC Marathon in November 2020. I really *really* didn’t think I was going to get chosen, but I think I’m happy I did?! Haha! I’ve always wanted to run a marathon and have run several half marathons as well as a handful of relays, including Hood to Coast. I was an avid runner after I had Brooke and Blake. After Eddie, I quit running and got more into lifting. Once we moved to New York, I really liked the idea of getting back into running because there are lots of places to run and I found a great group of ladies that were getting into running too. So after Porter was born, I signed up for the marathon raffle not thinking I’d get chosen. Ha! Obviously I DID get chosen so I’ve been training ever since.

I have been using the Peloton outdoor marathon training program and have been loving it! At first, I thought it was way too hard to keep up and sometimes still do think its too hard (the tempo runs get me every time!), but as my body gets stronger and adapts to the longer runs, things seem to be trending in the right direction every so slightly. I’m trying really hard NOT to overdo it and ease into the longer runs, but man oh man is it hard! I do have quite a few more weeks to prep which I’m thankful for, but this summer is when things really ramp up. I’m going to keep my mileage between 9-13 miles for my longer runs to get my body ready for the longer distances in August, September and October.

I’m really hoping the marathon isn’t cancelled because I’ve already put a ton of work and time into this training, but might be slightly relieved if it was canceled! Ha! I’m definitely nervous about it.

I’ve shared some details about my diet on instagram, but thought I’d write something a little more thorough.

Mid-March, I started counting my macros. When I saw a trainer after I had Blake, he was really strict with me and had given me specific goals to hit. They changed time to time, but were generally very low carb. I followed them really strictly the first two months and then started easing up a little and am currently in this quasi-strict phase and seeing great results! Here are my macro goals every day:

These total about 1600 calories. I was super strict at the beginning but now am ok if I go 10g above or fall 10g below. I’m not racing a clock to get fit as quickly as possible, so I figure I’m fine not being as strict. You can read my old blog post from 2014 when I first started doing this waaaay back in the day; there are lots of details there. I started out using paper but have since switched over to MyFitnessPal. All my food is logged in there and my profile is public so you are welcome to see what I’m eating. (Find me @golofamily)

This is basically a low-carb diet. I haven’t completely sworn off sugar, but since sugar is really high in carbs, it doesn’t fit into my macros.

At first, this was a really hard diet to follow. Like, REALLY hard. The first two weeks are typically terrible for me. But after that, it gets significantly easier and now, I feel like I’m on auto pilot. And, I think the best part is I don’t have any cravings at all. It has to do with keeping my blood sugar steady with all that protein and not having very many carbs. I do try to eat every two hours to keep my metabolism up and try to stay as hydrated as possible, but besides that, I’m just checking nutrition labels on everything I’m eating and counting them accurately.  (On every food label, you’ll find all the macros listed in grams and I count them all!) 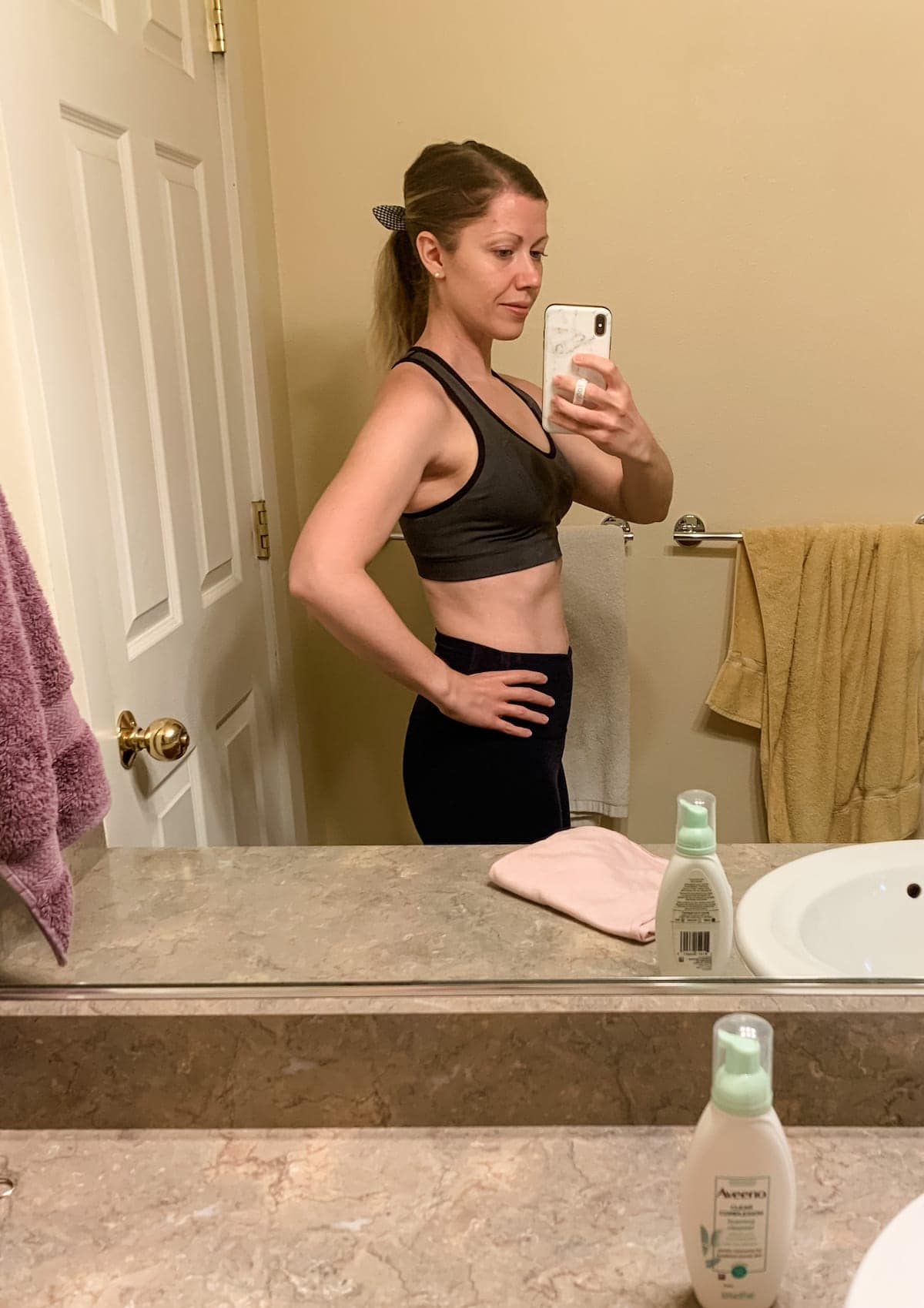 I try to run at least 3 times per week, but on the other days I try to cross train. Sometimes its a peloton ride, sometimes its strength training, sometimes it’s yoga. The peloton app has been amazing for me getting my workouts in. Their marathon training has strength, stretching and meditation added in and while I try to follow it diligently, most of the time I listen to my body and see what I can handle. Sometimes I’m really sore and just need to stretch or rest. Other times, I need to push myself. The most important thing is doing something everyday. Diet is like 80% of the puzzle and the other 20% is the work you do exercising to build muscle. So, I try to focus on that. The more muscle you gain, the smaller you will be and the faster your metabolism will run, allowing you to eat more calories every day.

Something I will never forget that my trainer told me back in the day is that my body shape won’t change. What do I mean by this? Well, I have a pear shape body. My lower body is larger than my upper body. I naturally carry all of my weight from my belly button down to my knees. Through diet and exercise, I will get smaller, but my body will always look like a pear. Yes, we can build up certain muscles to make me look a little more proportional, but I will always have a larger lower half. Knowing this and accepting this (ok, trying to accept this) has been so helpful for me!

Having been through this process a time or two before, I know I lose my weight from my upper half much easier than I do from my lower half. So, now that I’ve seen decent results around my waist and in my arms, in the next few months, I’m expecting to see the results I want in my lower half and to me, that’s exciting! It’s so hard to see results in my legs but I know I’m getting there.

I haven’t really been weighing myself a ton (more for my own sanity) and since we’ve flown to Oregon, I don’t have access to a scale. I’ve mostly been paying better attention to what muscles are showing more definition and how my clothes are fitting. My arms and abs are where I’ve seen the biggest changes and the pants that have previously been tight are getting much more comfortable to wear. Not falling off yet, but definitely loose around my waist. No pulling them up over my tummy roll because my tummy roll is almost nonexistent! Woot!

I was a comfortable size 6 on the bottom and now am in 4’s with some of those being a little loose around the waist.

I do have a little loose skin on my stomach which isn’t the most flattering thing ever, but after 4 babies, I expect no less.

Since Gordon is still in New York, I’m excited to see him in August and have him see the difference in my body from before and after. Now that I’m finally seeing results, it’s motivating! I wake up feeling lean and that is a good feeling. Changes are happening and that is what is propelling me forward.

So, I have fallen in love with the Fairlife Core Power Protein Shakes and pay too much to have them in my fridge at all times. Man are they good! They taste just like chocolate milk. I’ve also really enjoyed I Heart Macros Vanilla Protein Powder. Shaken together with a little unsweetened soy milk is delicious! Soy milk has less carbs and more protein than most milks.

The Mission Low Carb Tortillas with a slice of bacon down the center with lots of Mesquite Smoked Turkey is one of my favorite lunches. Add in lots of lettuce, tomato and a little mayo and it is fabulous!

Every morning and before any workout, I drink Amino Energy in grape (it tastes so good!). I used to drink lots of Spark, but that got to be too expensive, so we went to GNC to see what we could find that would be comparable, and this was it. Not only is it less than half the price, I think it tastes better. (Like a drink with vitamins, electrolytes, essential amino acids and caffeine.) I usually only have two scoops per day, which is one serving.

I haven’t been eating a ton of protein bars, mainly because I don’t like many of them. But once when I was grocery shopping and starving, I bought these Quest Hero Bars in Chocolate Caramel Pecan and they were actually delicious. These are different from the original protein bars and I liked these ones way better…probably because they were much higher in carbs. But were a delicious treat!

I also eat a lot of plain greek yogurt sweetened with truvia, cheese sticks and cottage cheese to get my protein intake in. It’s hard, but somehow make it work.

So, that’s it! Did I miss anything? Do you have any questions? While I think it sucks that I’m not super ripped yet, I know things come with time and I’m really good at the slow and steady. So! Here’s to another three months of this! I should be pretty close to running my marathon and reaching more milestones 🙂 Yes!