Don’t mind the black eye! This boy plays hard 🙂 He ran, tripped and fell, hitting the corner of a chair on the way down.

Just a couple of weeks ago, we celebrated my sweet Blake’s second birthday. Brooke and I did a little party for him which is where this cute video was filmed.

Here’s the latest and greatest things going on with my Blakey!

-Busy body this boy is. He is constantly moving everywhere and getting into things. I’ve baby proofed our house but need to toddler-proof it now!

-He loves to throw and bang and crash anything and everything, much to his sister’s dismay. 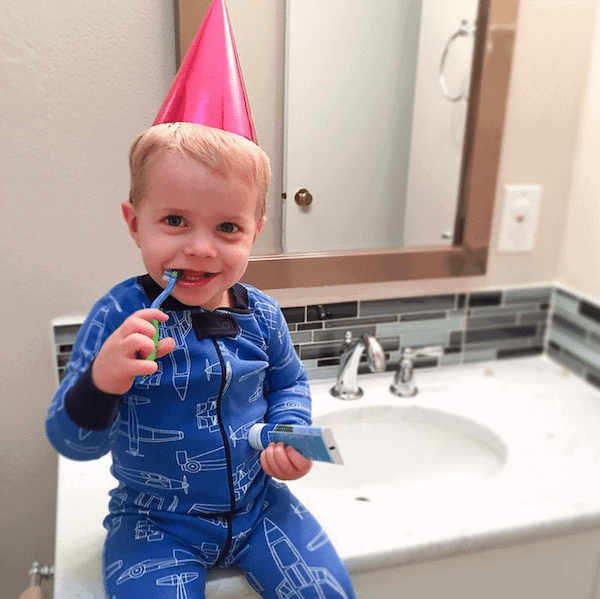 -Loves Thomas the Train, Lightening McQueen, Mater and Dusty Crophopper. For his birthday, I gave him a remote control Dusty and he loves driving him straight into the wall. Best $11 I ever spent.

-Loves playing outside, his new scooter, going down the slide, swinging high on the baby swings, climbing and jumping off everything, jumping on the trampoline, blowing bubbles, drawing with sidewalk chalk, going in the stroller for walks and running down the sidewalk with his sister to check the mail.

-Absolutely loves his Daddy! I wasn’t sure if he was going to remember Gordon once he got back after 5 months of being away, but those FaceTime conversations definitely payed off! Oh my goodness, those two have been wrestling nonstop!

-Blake is really reluctant to eat any kind of meat. Grilled steak cut up into small pieces is just about the only kind of meat he’ll eat at this point.

-He is very tender hearted. If his sister starts to cry, then he’ll start to cry. If Brooke laughs, then he laughs. Total monkey see monkey do. He wants to be bigger and older like her! It’s so cute 🙂 He gets really upset every morning because he can’t ride the bus with his sissy.

-Is talking so much now! Can say small sentences that are 3-4 words. Brooke will use siri on my phone and he will repeat everything she says. He’s gotten really good at saying “Call Gordon” except its more like “caw go-don”. So cute!!

-He knows and can recognize circles, triangles and ovals. He still gets rectangles and squares mixed up. Starting to recognize pentagons, hexagons and octagons.

-Loves to read, build towers with blocks or stackable boxes {and push them over} and build little roads for his one million hot wheels.

-Nicknames for Blake include but are not limited to: Bubba, Bubbie, Brother, Blakey-Cakey, Blake-man.

-Loves dogs and talking about the sky! Clouds, sun, moon, stars, planets, etc. He is fascinated by it all. We went to a planetarium show and he was rivited by it all! So was Brooke for that matter.

-Consistently is running into things, like chairs, walls, other people, etc. He doesn’t look where he’s going so it’s bound to happen.

-We’re going pacifier-free now! It’s been a little rough, but he’s getting the hang of it. Only a few more days and he should forget all about it. At least that’s the hope.

We are so happy to have this boy in our family. I keep seeing glimpses of the terrible twos but am hopeful that they won’t be bad because of how cute he is! Lol! We love our Bubba!