I was looking through a bunch of photos we have of our sweet little boy and what a character he is! We are so blessed to have him and his sweet spirit in our family. It was a struggle and super long waiting game to even get pregnant with him, and now that he’s here and has been here for over a year {!!!!!} I can’t believe there was ever an issue to begin with! Here’s the latest and greatest with our sweet little boy!

*still walking holding onto furniture/anything he can grasp. He’s stood on his own without holding anything for 2-3 seconds at a time, but then realizes he’s not holding onto anything and freaks out. We got him a walking toy for his birthday and he isn’t completely comfortable using it without help, but we’re making progress! Hallelujah!

*the boy can FINALLY CRAWL! He doesn’t like to at all because scooting on his bum is a lot faster, but he has finally acquired the skill.

*he’s still sleeping 12 hours every night with 2 naps in the day. It’s glorious!

*the drool is making it’s appearance again. He only has 3 teeth on the bottom and none on the top! I think he’s getting a bunch in the near future. He’s got a cough and the sniffles too, so I’m hoping it’s all teething related and not viral. We’re going to the doctor tomorrow for his 12 month well baby visit. We’ll figure it all out then 🙂 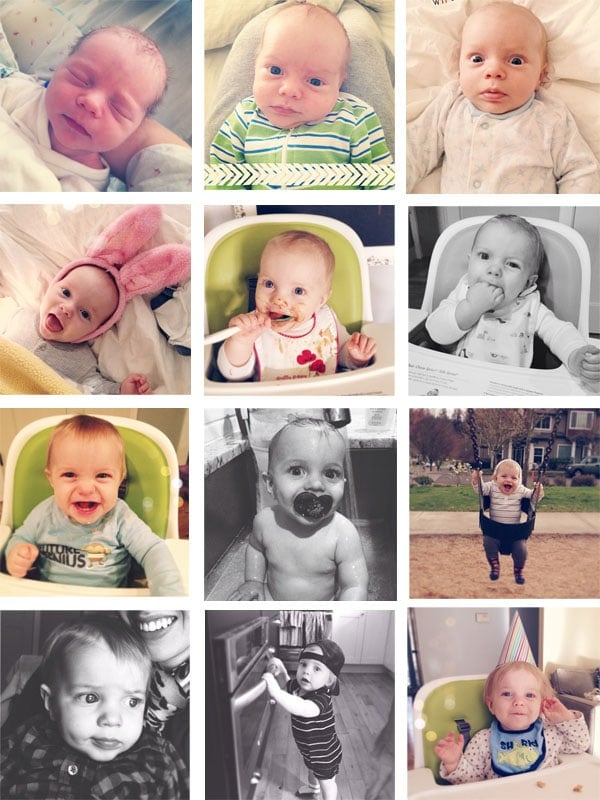 *he has a toy rake and toy shovel that he LOVES! Also for his birthday, we got him a small bouncy soccer ball and football. This boy loves banging things, throwing things and moving around everywhere! I certainly have my work cut out for me once he starts walking!

*he also loves things with wheels that he can push/throw too. I’ve gotten hit a couple times 😉

*right on his birthday, he started mimicking things we do! Like, brushing his hair with a brush, pointing the remote at the tv and giving kisses! He seriously just kills me with his cuteness!

*His hair is getting a little out of control. I want to go take him to get it cut, but I really don’t think it’s gonna work out very well. Maybe I’ll just have to wait until he’s two.

* He’s transitioning into not wanting to eat anything we give him on his tray. If we put it on his tray, it gets thrown off. If it’s something familiar to him/he’s starving, then he’ll eat it. Things on this list: grapes, apples, oranges, strawberries, toast, crackers, cheese and sometimes beans if we’re lucky. Everything else gets tossed. I’m hoping this is a phase.

*He really loves applesauce and yogurt too. I just buy a jar of unsweetened applesauce and individual cups of chobani yogurt from Costco. He would have 3 a day if I let him!

*He’s becoming a lot more capable and comfortable transitioning from sitting to crawling to standing and back again. I was a little concerned with this last month, but now it’s like “whoa. look at him go!” So, way to go Blake!

*Also for his birthday, we got him a baby swing that we added to our play structure outside in our backyard. He LOVES it. That boy loves to go fast and high. He always is smiling in the swing.

*Over the last two weeks, we’ve been transitioning him out of baby formula and onto whole milk. At first he hated it, but now has come around.

*The sippy cup situation is bad. He knows how to use a sippy cup, but spits it all out. I tried a cup and straw and that seems to work better, but he still likes to let it all dribble out of his mouth.

*This means baths almost every night….which he is just thrilled about! He loves to splash and play in the water…just like his sister.

Overall, he’s doing well and is the sweetest little guy ever with the brightest blue eyes and blonde hair! Oh, we love you Blake-man! Happy Birthday 🙂