Thick, flaky, and easy to work with, this Pie Crust Recipe will be the recipe you know and trust for years to come. Extremely forgiving and the perfect complement to any sweet or savory filling. Fabulous for any dessert pie or Quiche! Pie crust or pastry of any kind may be viewed as intimidating, but I’m here to tell you that it’s not as hard as you think. Read on, friends! If you prefer an all-butter pie crust, try my All Butter Pie Crust.

I LOVE pie…..and pie crust. It is just so irresistibly flaky and delicious. I’ve tested plenty of recipes over the years, trying all butter, all-vegetable shortening, all lard, combinations of all three, adding only ice water, trying a vinegar/egg slurry and the list goes on. After literally trying recipes for ten years, the be-all-end-all recipe for me ended up being an experimental version of the pie crust my Mom made from the Tenderflake packaging. Tenderflake is a brand of shortening found in Canada, comparable to Crisco. This recipe is a doctored up version of their recipe- it’s a great recipe as is, but I’ve tweaked it slightly to yield a crust that is slightly salty, can be rolled thick or thin and is consistently flaky every time.

Please please please if you’re new to this pie-making business, don’t be scared! It’s not as hard to make pie crust as you think! Follow these tips and take a chance.

How to Make Pie Crust

Believe it or not, this pie crust recipe is quite simple to make. Don’t be nervous! The ingredients needed is short and the directions are even shorter. Roll and use as you’d like. The more specific increments and directions are found in the recipe card below.

Blend flour and salt in mixing bowl. Add in both kinds of shortening. Using a pastry cutter, cut shortening into flour to create small lumps about the size of peas. Set aside.

In a small bowl, whisk water, egg, and vinegar together.

Slowly pour in the water-egg mixture into the flour mixture going bit by bit, using a fork to stir and moisten. You will most likely not use it all. Use just enough to form a dough. Form the dough into 5 balls. Do your best to not work or knead the dough.

Why Use Vinegar in Pie Crust

I know vinegar seems like such a random ingredient that might not seem necessary for pie crust, but it helps prevent gluten from forming, this giving you a flakier pie crust. While I have an all butter pie crust that uses zero vinegar, this is *the* recipe my mom swears by that she got off of an old Tenderflake package (a Canadian brand of lard). I’m not sure if the science backs this up, but there are plenty of recipes that call for a little vodka as well which works in a similar way. Give it try! You might be surprised just how good this pie crust is.

Gently, combine together using your hands and form into a large dough ball. Next, divide into 5 thick crusts or 6 thinner crusts. Refrigerate an hour or two before rolling. You want to let the dough rest in the fridge for three reasons:

Beginner Tip: I divide this recipe into five thick crusts because I like thick crusts and because it’s way easier to roll out that way. But you can definitely get six!  If you’re just starting, it’s better to have extra pie dough than not enough. So, divide it into five.

Roll out, crimp, fill and bake! Or blind bake using the directions below for a pie that has a creamy, no-bake filling.

So, this pie crust recipe makes 5-6 crusts, total. Unless it’s a holiday, you may not need that many crusts. However, these freeze beautifully and taste just as good months later.

Portion and wrap extra pie crust in air tight containers (ziploc freezer bags work great!). As long as they’re wrapped well, they will last up to six months in the freezer. Defrost in the fridge for 24 hours before rolling.

If you’d like to make this ahead and store in the refrigerator, be sure to portion and store in airtight containers. Keep in mind that it will only last about 48 hours before it starts to turn grey and go bad. This is because of the eggs; they turn pretty quickly once they are out of their shell. So, note that you will have to use it before then.

What is Blind Baking?

Blind baking is simply pre-baking your pie crust before filling it. If you are making a cream-based pie (chocolate cream pie, pumpkin cream pie, banana cream pie, etc..) you’ll need a pre-baked pie crust because the filling will be made separately.

Once you have your pie crusts made, roll out and fill your pie plate. Prick dough with a fork, add a square of parchment paper to the crust and fill with pie weights. If you don’t have pie weights, dried rice, beans or even flour can work! You just want to hold the crust in place to prevent shrinking.

Bake at 400 degrees for 10-15 minutes or until the crust is golden brown. Be sure to use a glass pie plate so you can keep a close eye on the bottom of the crust to ensure it’s baked before pulling from the oven. It may take less time if you’re using a metal pie plate.

I think that’s it for now! If you have any questions be sure to leave a comment and I’ll do my best to get back to you. 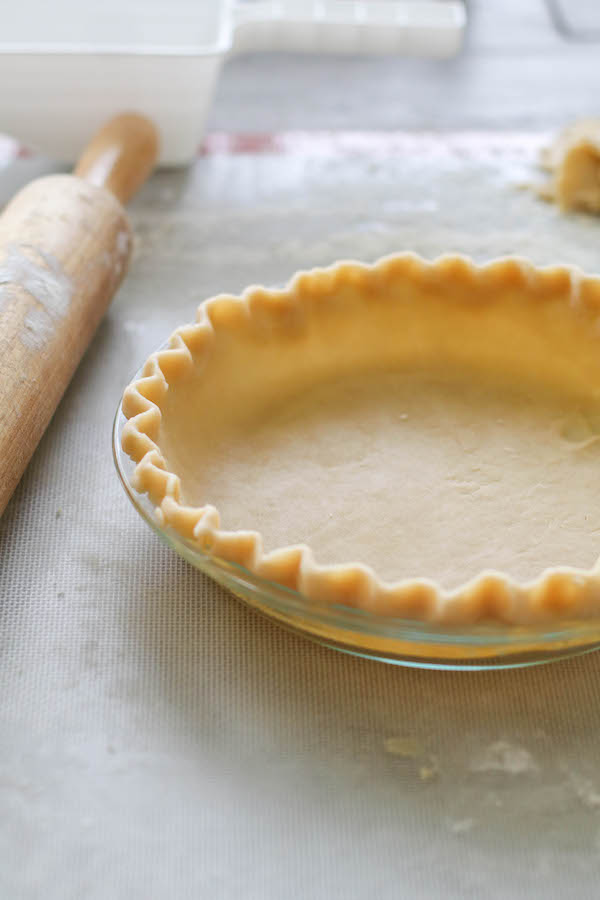 PrintPrint Pin ItPin It
5 from 26 votes

Thick, flaky and easy to work with, this pie crust recipe will be the recipe you know and trust for years to come. Give it a try once and be converted!
servings 5 crusts
Prep Time 15 mins
Cook Time 0 mins
Total Time 15 mins