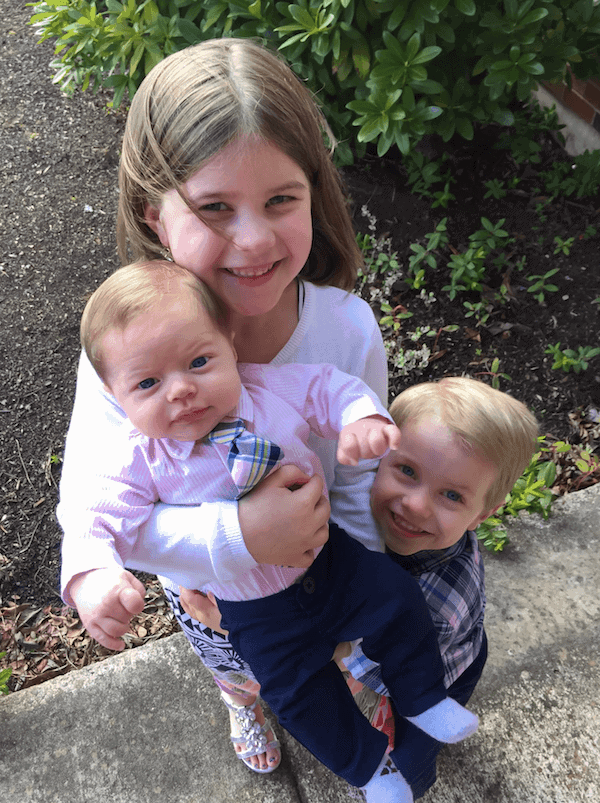 It’s been a while since I’ve done a post talking about my lovely children. A handful they are, but man oh man do I love them like crazy. I’ve talked a whole bunch about the baby because he’s the latest and greatest ’round these parts, but Brooke and Blake are learning and growing by leaps and bounds too.

Brooke continues to thrive at school in first grade. Most days, she LOVES heading out the door to school. She loves her teachers and has a small group of friends that she tells me all about when she gets home. Her favorite parts of school mostly revolve around being social: lunch time, recess, being on the bus with her friends, music class and then library & technology. Her reading level is at end of year second grade level and we fully expect her to be at a third grade level by the time she finishes school in June. She loves to read Diaries of a Wimpy Kid, Captain Underpants and Fairy Princess books.

Brooke still enjoys her ballet class, but likes dressing up for ballet more.

She just recently got her hair cut short and LOVES it short. I loved it long because it was easier to pull back out of her face, but her strong will prevailed. Hopefully it will grow quickly so I can pull it into a bun for her end of year ballet performance.

Other loves also include: playing with friends, sleeping over with her closest friends Halle + Ava, Shopkins, wrestling with her Dad, going to get pedicures with Mom, reading, going to the park, riding her bike.

Brooke gets annoyed easily by Blake and Blake thoroughly enjoys bugging his sister. I think it’s a boy thing. Once in a blue moon, they will get along and play really well together, but that’s typically short lived. Haha! She is very tender-hearted and gets upset and offended easily, even when people are joking. Gordon will sometimes joke with me and be sarcastically mean and Brooke will say “DADDY! Don’t be mean to Mommy!” and then make him apologize.

Sometimes, Brooke will get an attitude and think she is completely right and everyone else is wrong and will get herself in trouble. But these times are few and far between, thank goodness.

She also has recently let me know that she wants to get a girl Chihuahua and name her Miss Hollywood. I almost want to get one just because this name is ADORABLE.

Blake is generally a happy little guy and loves following and trying to be like his older sister, much to her dismay. He loves to play outside, go to the park, ride his scooter, run, play in the dirt with monster trucks, go to the library, blow bubbles, read with Mom, play-doh and play in the bathroom with the water.

This two year old is certainly giving me a run for his money. Is he at the terrible two’s stage? No, I wouldn’t say that. He’s not a tornado or anything. But he is very good at pushing buttons and our patience. Blake gets time outs for being too physical and whining for no good reason.

He LOVES playing with his plane, Dusty Crophopper, and loves having {and sleeping with!} any hot wheels cars he can lay his hands on. Also adores certain stuffed animals and will have a meltdown if he can’t find them after literally 5 seconds of “looking” for them. Our kids are really bad at looking for things right in front of their faces.

He fights taking naps, but 100% needs them still.

He’s a bit of a picky eater, but knows that the rule at our house is you have to try everything, so, he gets the job done most days. He loves loves loves oranges, clementines, apples, grapes, strawberries, celery and pizza. Oh, how he loves pizza.

Blake copies what we say sometimes and will say these funny statements just to get us to laugh! His latest is saying “that’s hilarious” except its more like “dat’s hiwarius.” He’s SO cute!!

He is still keeping me on my toes by having zero predictability with his nighttime sleeping patterns. He is such a happy little guy when he sleeps for long stretches and then a big grump when he doesn’t. The longest he’s slept at night is 6 hours a quick 10-minute feeding and then went down for another 4 1/2 hours. I felt like a brand new human being after that night. Occasionally he won’t be able to settle down in the evenings and will be up 3-4 times in a 5 hour stretch. THAT is awful. But those are starting to happen less and less. Naps in the day are hard because he’s a light sleeper and can be woken up by the slightest little noise. Plus those naps are typically less than an hour. He will fall asleep immediately once he’s in a moving vehicle though. I’m not sure if this is a plus or minus.

I don’t remember being this exhausted with my first two!! {I’ve been saying that a lot lately!}

Eating-wise, he is doing great! My milk supply seems to be keeping up with the demand. His all around chubbiness is proof of this. I’ve tried to pump a little milk to see if he would take he will! Like, with no problem at all. Pacifiers? He HATES them and cannot take keep them in his mouth. Sometimes if he’s really cranky, we can sneak one in and he’ll keep it in as long as we hold him close so it doesn’t ever have the opportunity to fall out.

Brooke and Blake love their little brother a ton! Brooke a little more so than Blake, but he’s definitely getting there! He’s good at giving kisses, talking to him and he’s even asked to hold him occasionally. So, just as I suspected he’s warming up to Ed quite nicely and it’s only a matter of time before they are getting into trouble.

Eddie is smiling now!! His smiles are so sweet and infectious 🙂 We love it! He is most happy in the morning and most distraught in the evenings…most likely due to his exhaustion. Come on, boy. SLEEP!

Overall, we are just trying to give our kids our best selves and hope to goodness we don’t mess them up too badly! Haha. {I’m only 87% kidding.}

Gordon and I love being parents to these cutie pies, even though its harder than easy and more time consuming than we could have ever imagined. BUT, we love ’em like crazy and wouldn’t change a thing.