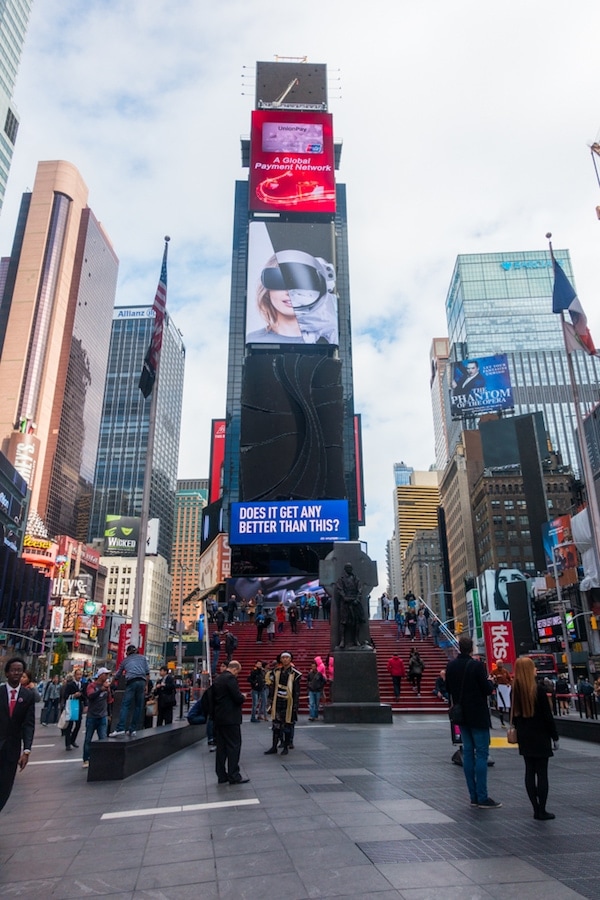 I am finally getting around to posting some of my pictures from when Shawn and I were total tourists in New York City! I’ve decided to break down my posts into days so I don’t overload you and so I can share more details. We arrived on Monday, left on Friday and had three full days to  explore the city.

I thought it made most sense to write a list of things we wanted to do and then prioritize them and divide them geographically. We ended up staying at the Hilton Garden Inn Central Park South because it was centrally located to everything we wanted to do and was one of the more affordable hotels. We walked to nearly everything which saved us money and took a Lyft {a cheaper Uber} everywhere else. Super simple!

I do have some video footage from this day that I’m hoping to edit and post to Youtube soon. I’ll be sure to post a link once that happens! 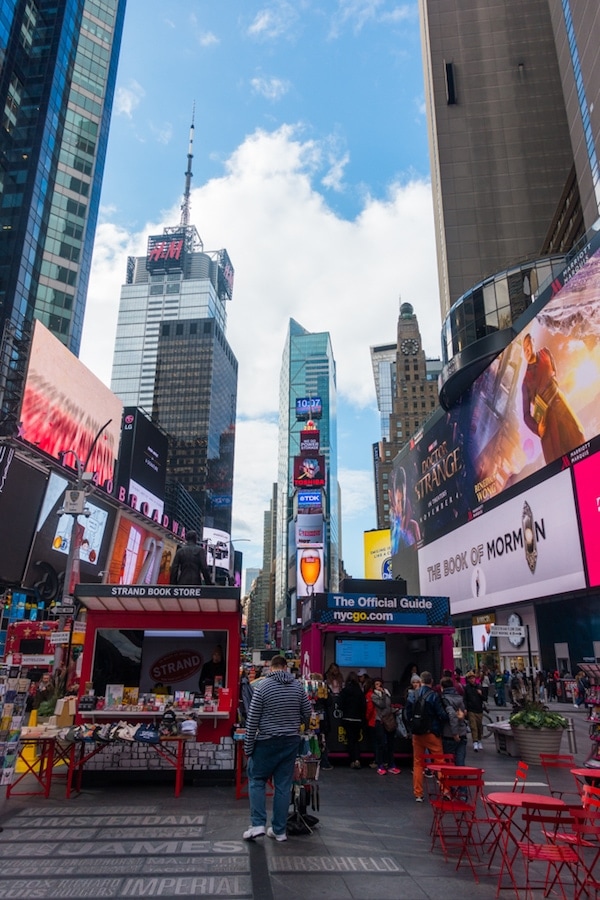 We were staying right around Rockefeller Center on our first day and exploring what there was to see there. On our way, we stopped off at Times Square. The last time I was in Times Square was when I was on Good Morning America in 2010. It brought back lots of fun memories 🙂 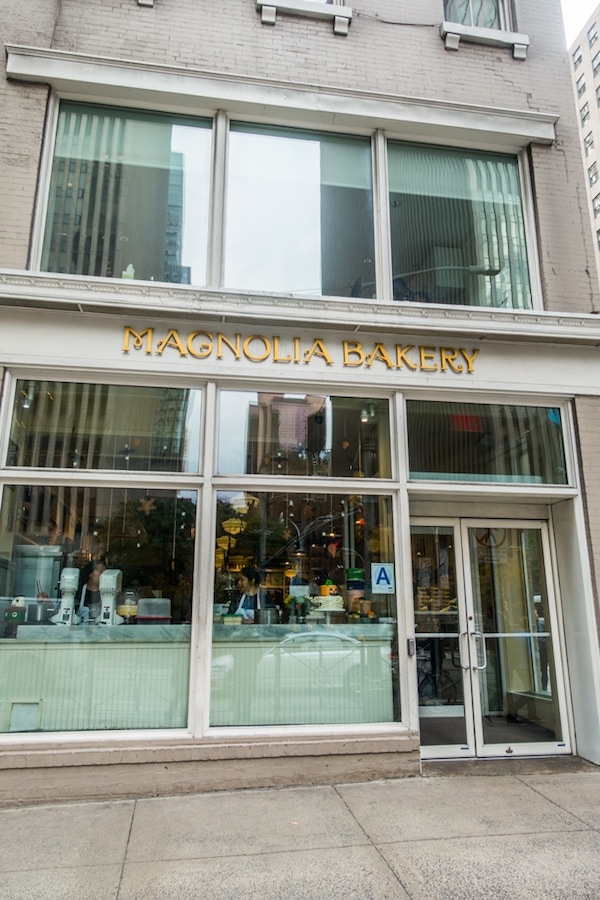 Of course we had to stop at Magnolia Bakery for some sweet treats! 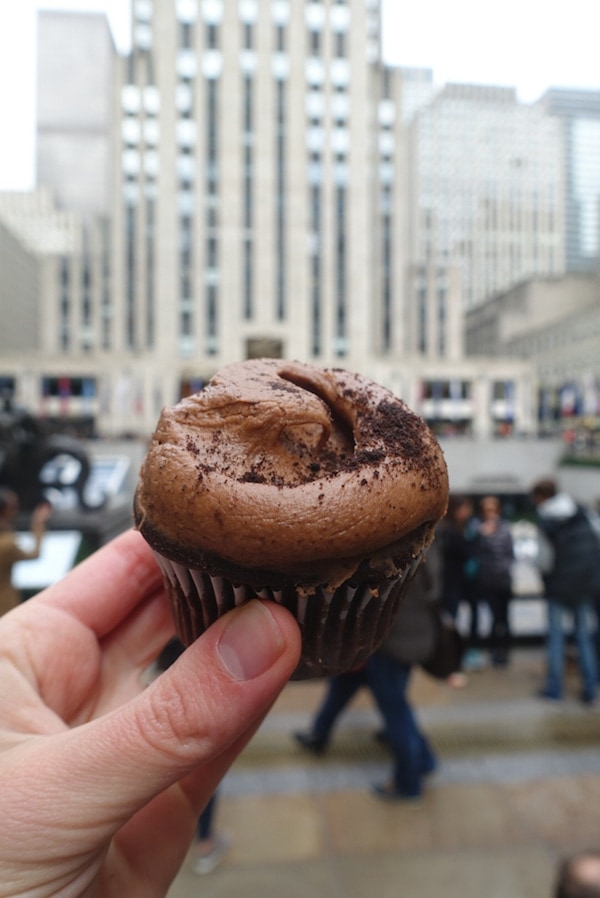 Shawn and I picked the yummiest looking cupcakes. They didn’t have lemon, so I picked this chocolate gem. 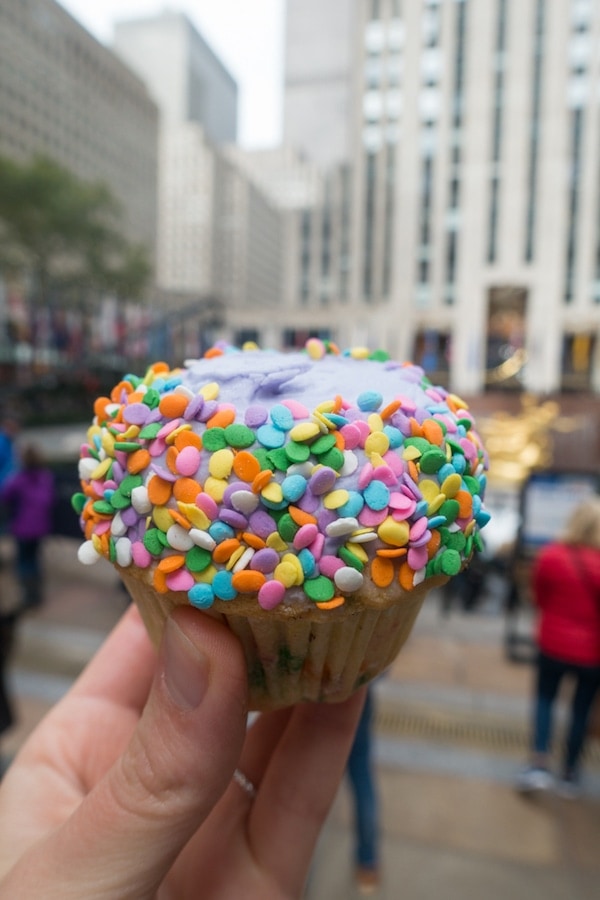 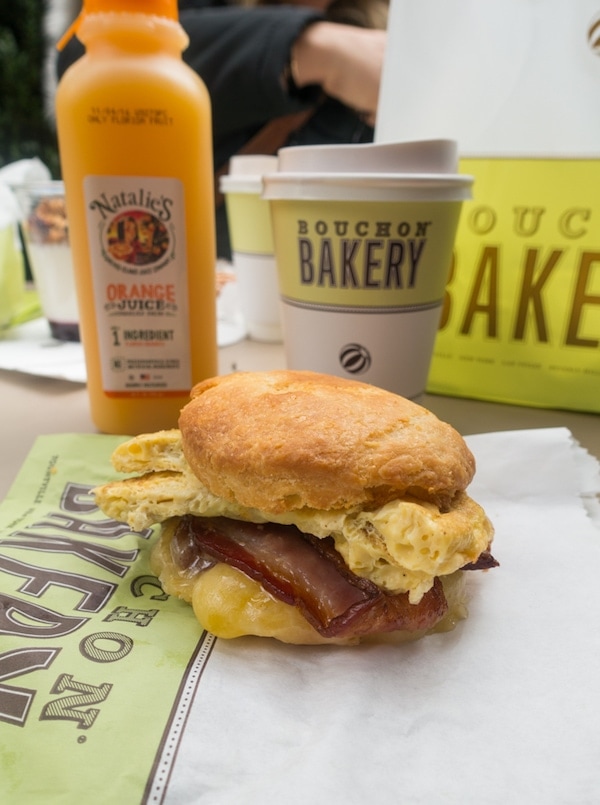 After that bakery stop, we headed over to see the Today Show being taped and went across the square to Bouchon Bakery. This place was so good!! Everything we got was awesome 🙂 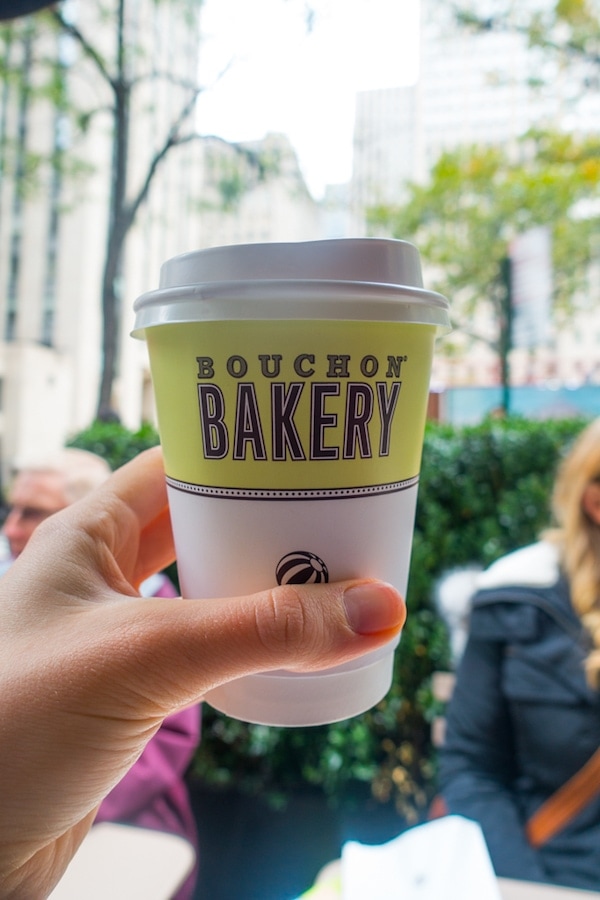 And the hot chocolate is really really rich. Very good, but I couldn’t finish it. 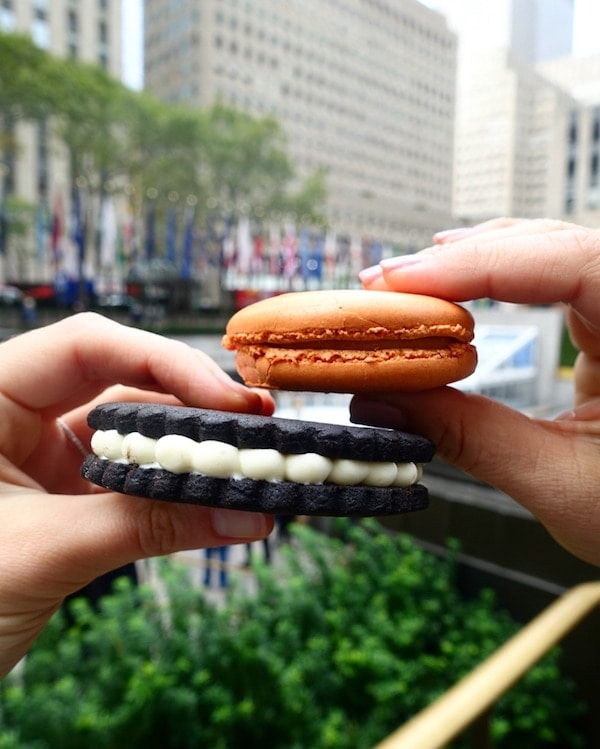 The treats at Bouchon were also amazing! We were pleasantly surprised at how good they actually were. 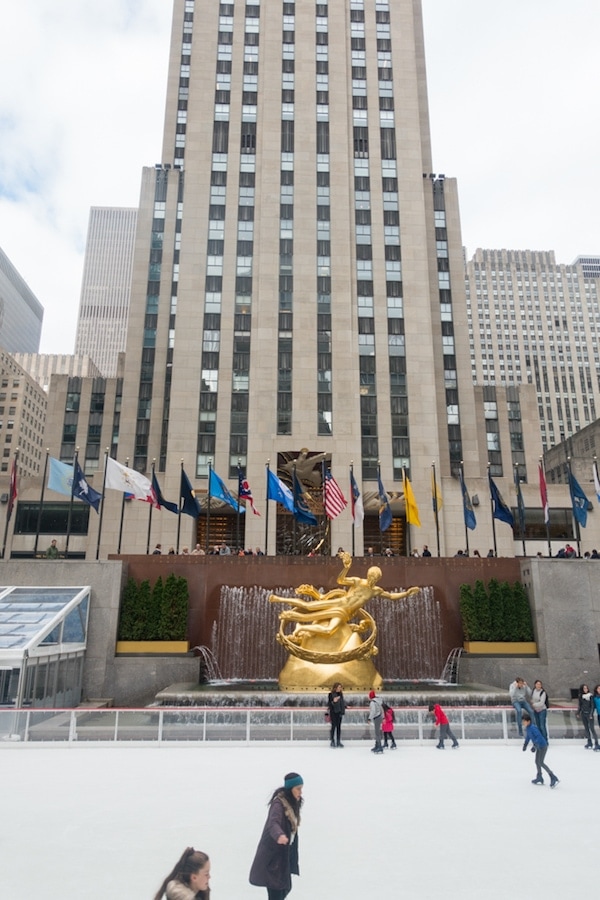 So, after our two super healthy breakfasts {haha!} we checked out the rest of Rockefeller plaza, went shopping at the lego store, walked down 5th avenue and headed back to the hotel because!! We had tickets to Jimmy Fallon! WHAAAT? 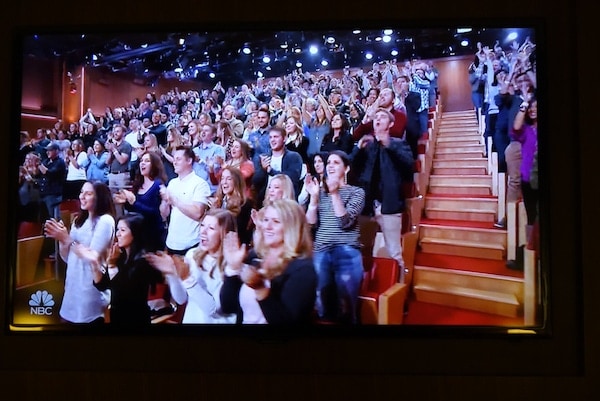 Oh look! There we are in the front row!! Can you spot us? 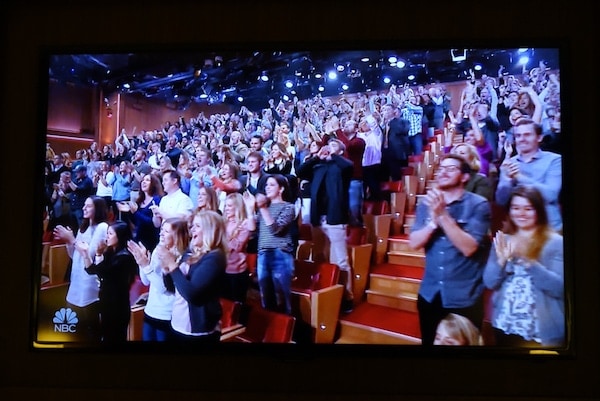 A lot of you have asked me how the heck we got tickets since they are so hard to come by. Here was our experience:

How we got Front Row Tickets to Jimmy Fallon

Going to see Jimmy was at the top of our list of things to do in NYC, so we did our research. THIS is the website you actually request the free tickets from. Tickets go on sale the first week of every month for the next month. For example, we went to an October taping so we had to request tickets the first week of September. The last week of August was when we started checking the website and twitter account {@FallonTix} to get the actual date and time of when tickets would go on sale.

The day before we actually requested the tickets was when we signed up with 1iota which is the system used to request tickets. It’s faster to sign up ahead of time so you just have to log in on the morning of getting tickets. Within that system, you have the option of adding photos of yourself and linking to your social media channels. We did ALL OF IT because we weren’t sure if they would pick and choose people for the audience based on what we all looked like. Speculation on our part, but we didn’t want to chance it.

So, both Shawn and I woke up early and were online ready and waiting for the right time to start requesting tickets. We refreshed the page and scrolled over to the right dates we wanted to go and sure enough they said “available”, so we requested tickets for two of the three days we wanted. We couldn’t request all three because they sold out so quickly. Be sure to put a great reason why you want to attend! Shawn and I put that we were bloggers visiting NYC for the first time and wanted to see our favorite comedian…or something along those lines.

We got email confirmations saying that they received our requests, BUT that that didn’t mean we actually got tickets. {We didn’t realize this until after the fact.} Within that email, it was also stated that we should hear back 2-3 weeks prior to the taping to let us know whether or not we would be issued tickets. I’m not sure if they pick people based on those online profiles, but I think it helps the cause if you have them filled out completely. This is why I would recommend having your profile completely filled out.

ANYWAYS, 3 weeks before the show we received word that we got tickets so we printed our tickets and headed to the city!

On the day of the show, we were told to arrive at Rockefeller Plaza at 2:30, but would recommend arriving at 2pm. We got there at 2:15 and were pretty far back in the line. Once you get in that line, you are not allowed to use your phone to take pictures or else they will kick you out. They tell you that again and again. Of course Shawn and I were SO bummed because there were lots of things we wanted to take pictures of. There were people walking around with iPads willing to take your pictures, but it’s just not the same.

After waiting in line, we went through to show our ID’s, get physical tickets and wristbands. On the back of our tickets were written the letters “SS”. We were puzzled by this because some tickets had just 1 letter, some had numbers. It was confusing to us to say the least. We were brought to a lounge to wait, go to the bathroom and get a drink of water. Employees were there circulating the room. Some taking pictures with their iPads, some making sure our cell phones were away and some just walking around slowly looking at us. Shawn and I thought they were trying to see our letters on the backs of our tickets to seat us in strategic spots in the studio. Again, more speculation.

We waited about 45 minutes in the ‘lounge’ before they started calling groups in to get seated. They called 1 letter tickets first, then 2 letter tickets, then numbers. Once in line, we had to get organized alphabetically and brought up in smaller groups by elevator. We thought since we were near the back of the second group of people, we would have pretty crummy seats.

Walking off the elevator, we told the lady at the door right outside the studio how many were in our party {2} and were then directed to another lady at the top of the first set of stairs in the studio. That lady told us to go down to a third lady at the bottom of the stairs who sat us in our front row seats. All the seats were filled around us and we were shocked that we were the ones they were waiting for to fill those seats. We were thrilled.

We waited another 30 minutes before the show actually started and the taping took an hour. You can see us in this video pretty clearly at 5:06.

At the end of the taping, Jimmy gave us all high fives and answered a few questions. His hands are SO SOFT and he looks shorter and more tired in person. He is totally authentic and was geeking out when Phil Collins was performing. He genuinely loved Phil Collins. It looked like his mind was being blown as he was singing.

We watched the show that night and were surprised that we were on twice! It was a fun surprise.

Here are some tips for getting front row seats…possibly

Dress up a little. Try to look good.

Go in even groups, not odd. Ideally, you’ll only have 2 of you. Seated beside us were two girls and on the other side of the studio were two couples. Behind us were very skinny and pretty girls. I guess it helps if you’re a girl. Ha!

We watched all the Jimmy Fallon episodes that week we were in NYC, looking for similarities and differences in the audience and in all the times we watched, there were ALWAYS two girls seated in the seats we got. Not sure if that’s just a coincidence. More speculation on my part.

Of course any tickets you can get to Jimmy are awesome tickets! And, it might even be better to sit a little further back so the camera isn’t always in the way. At times it was and that was not very fun. But that’s the only negative thing I have to say about this whole experience.

So, yeah. That was that. 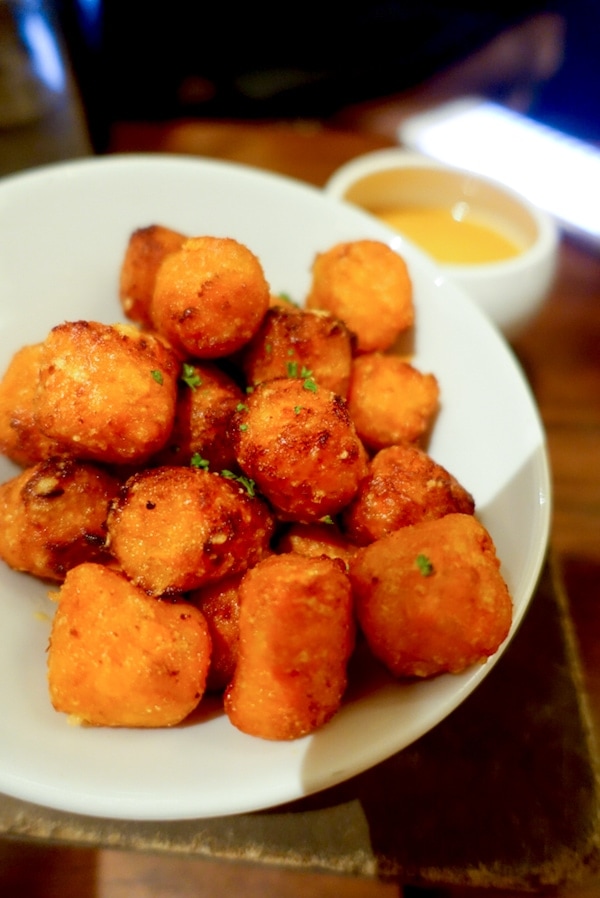 After Jimmy, we took a Lyft to Max Brenner for some amazing amazing food! The sweet potato tots and mac and cheese were incredible! I only wish our seats were further away from the door because we got lots of cold air blown onto us. But the food was incredible. 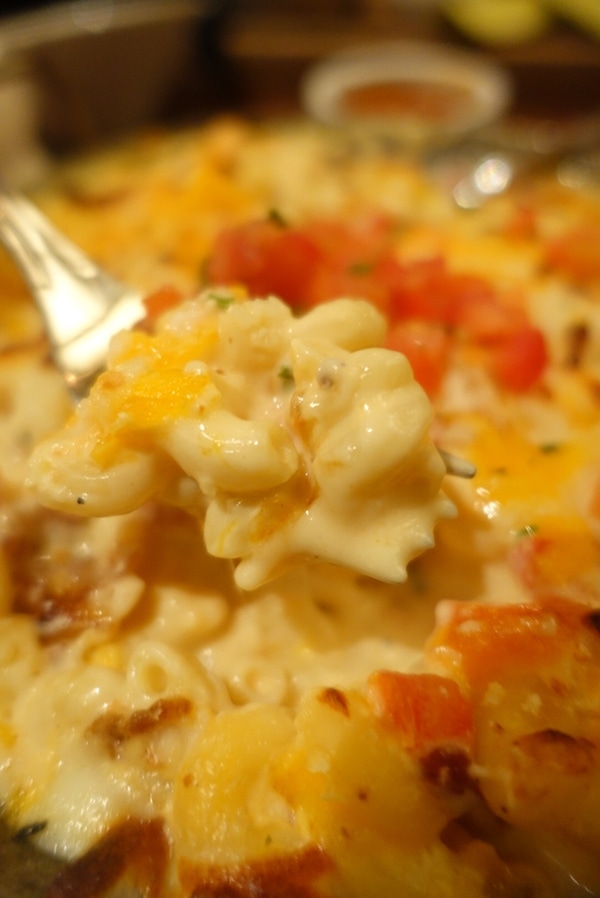 So that was our first day in the city. Totally hard to top for our next two days, but we managed to do it! I’ll be posting the rest of our trip next week, so stay tuned. Have a great weekend 🙂