Lots of travel and exhaustion these past few days!

We started the week in Oregon and ended up back in New York. It was a bit of a whirlwind, but overall I think we are glad we went. *yawn*

Gordon, me and the kids were staying at my in-laws in Hood River, visiting with cousins and having a ball. Jumping on the trampoline, exploring the very green property, playing pool, having family dinners, watching movies and spending time together. Man, it was nice to nap on a couch and drive a mini van to the grocery store again. (I can really appreciate the city, though, keeping me fit! I did zero active things in Oregon. Ha!)

At some point during the week, Eddie woke up screaming in the middle of the night. One of his eyes were swollen shut and he was wheezing. We thought maybe he had an allergic reaction to something Oregonian or my sister-in-law’s cat and whisked him off to the ER at 2am. Turns out he was just sick with a virus and he had pink eye! Poor kid. We grabbed some medicine and made sure to keep him well drugged for the next few days. Thankfully, no one else got the pink eye or cold. A little nervous to get that bill when it shows up though. Haha! Thank goodness for insurance.

Gordon ended up flying back to Oregon on Wednesday (tear) and I headed out of town with the kids the same day in a rental car to Portland to visit some old friends and neighbors.

Brooke was so excited to see her two good friends who she has known since she was four. They are my friend Claudia’s girls and it was so nice to catch up with them all! Claudia and I have been friends for years which is why our girls are so close. (She watched Brooke when I had Blake in the hospital, came over at a moments notice when I had to go to the ER late one night, she’s been working for me on the blog for years, she helped me decorate my house, she taste tested tons of recipes over the years, etc..) Claudia has five girls, the last two kids being twins! I left Oregon when she was pregnant with them and had never met them so I was so excited to meet these crazy little girls I keep hearing about.

Everly (one of the twins) and Eddie got along swimmingly. They were so cute together! We went on a nature walk one morning and they held hands for a good 5 minutes. Of course after that point, we regretted the nature walk and headed back to the mini vans, grabbed some McDonalds for lunch (or as Eddie says “old mcdonald”) and went back to Claudia’s house.

The night before we went back to New York, I was able to get together with some old Oregon friends. We somehow all found each other YEARS AGO, had a bunch of babies and became friends. Even though many of us have moved away from each other, I was so grateful to have these ladies in my life. They have texted me, sent me gifts, visited with me, helped me and have been such kind examples of what service really means and looks like these past few years. (You may remember last September when we all went to Vegas for a quick weekend that was a BLAST!) Maybe we’ll be able to do something similar again, but until then, I’ll be harassing/texting them.

Anyways, we went to dinner and stayed for nearly 5 hours, talking but mostly laughing the entire night. It was just like old times and I was so sad to leave them in the parking lot. Man was I sad to leave. But, the nice thing is I know I will see them again 🙂

Saturday morning, me and the kids headed back to the airport to catch our flights back to NYC. We had plenty of time to drop off the rental car, drop off our bags and find our gate. It was relatively great for the first half of this long travel day.

I wasn’t sure if I was happy about having a layover in SLC for an hour with my three kids because I like to choose direct flights as frequently as possible, but once we landed I remembered they had a Cafe Rio IN the airport, so we quickly made our way over there, waited in the long line and ordered all the things.

I hope when I get to heaven, that pork salad is there. I’m confident in saying that it is the one meal I would want to eat before I die. It is *that* good. I haven’t had it in YEARS and they short changed me on the pork if I’m being completely honest, but man did I snarf that sucker down on the plane. Worth every calorie. 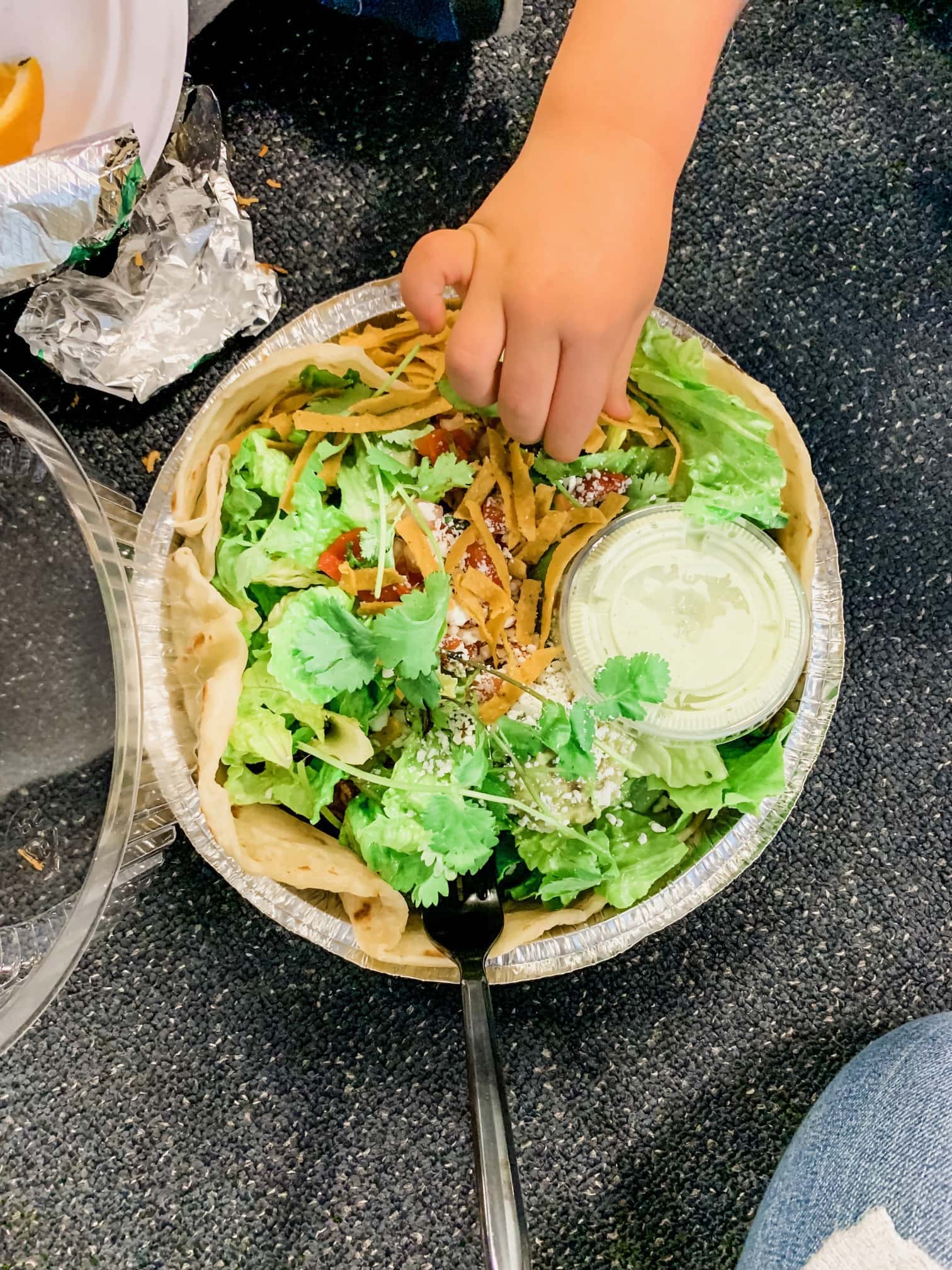 The flight from SLC to JFK was relatively uneventful, except for the few minor breakdowns from Eddie and Blake. It could have been totally worse, so I was happy my kids were relatively easy to manage. We landed at 11pm, got off the plane at 11:30, got our bags by 11:50 and were in the uber on our way home by 12:10. It’s kind of a lot of moving parts going off the plane to grabbing bags to loading my entire clan into a car (the worst part of the trip in my opinion) but hallelujah, we did it and I could breathe a sigh of relief once we were on our way home.

We arrived at 1am and Gordon was ready and waiting for us (with fresh flowers on the table to boot!)

By the time we got all the kids settled into bed and our heads hit the pillows, it was 2am. I told all the children to just sleep as long as they needed and if they woke up to tell their bodies to go back to sleep.

To my shock, we all slept through church and felt pretty darn great waking up after noon. We are still getting on this time zone and I’m especially tired, but its hard to tell whether that’s because of the baby I’m growing or my body being all mixed up. Regardless, the kids are doing great and I am slowly getting back to our normal routine.

Even though we were traveling, I was still able to get some posts up for ya! Here they are incase you missed them: Ultimate Sugar Cookies, Cowboy Caviar (not a new recipe, but revamped the old one with more info so you can make this better!) and some fabulous Stuffed Peppers.

Hopefully some rest for me and back to school grind for the kiddos. Maybe I’ll get back to the gym and work off that Easter candy! Going through my 20th week of pregnancy this week!

I am prepping for the last and final birthday party for Blake. That kid has been celebrated nonstop this month! I won’t do birthday parties next year for my kids, I think. Too much work.

Gordon is working as per usual and I think is working this weekend which isn’t the best, but it is what it is.