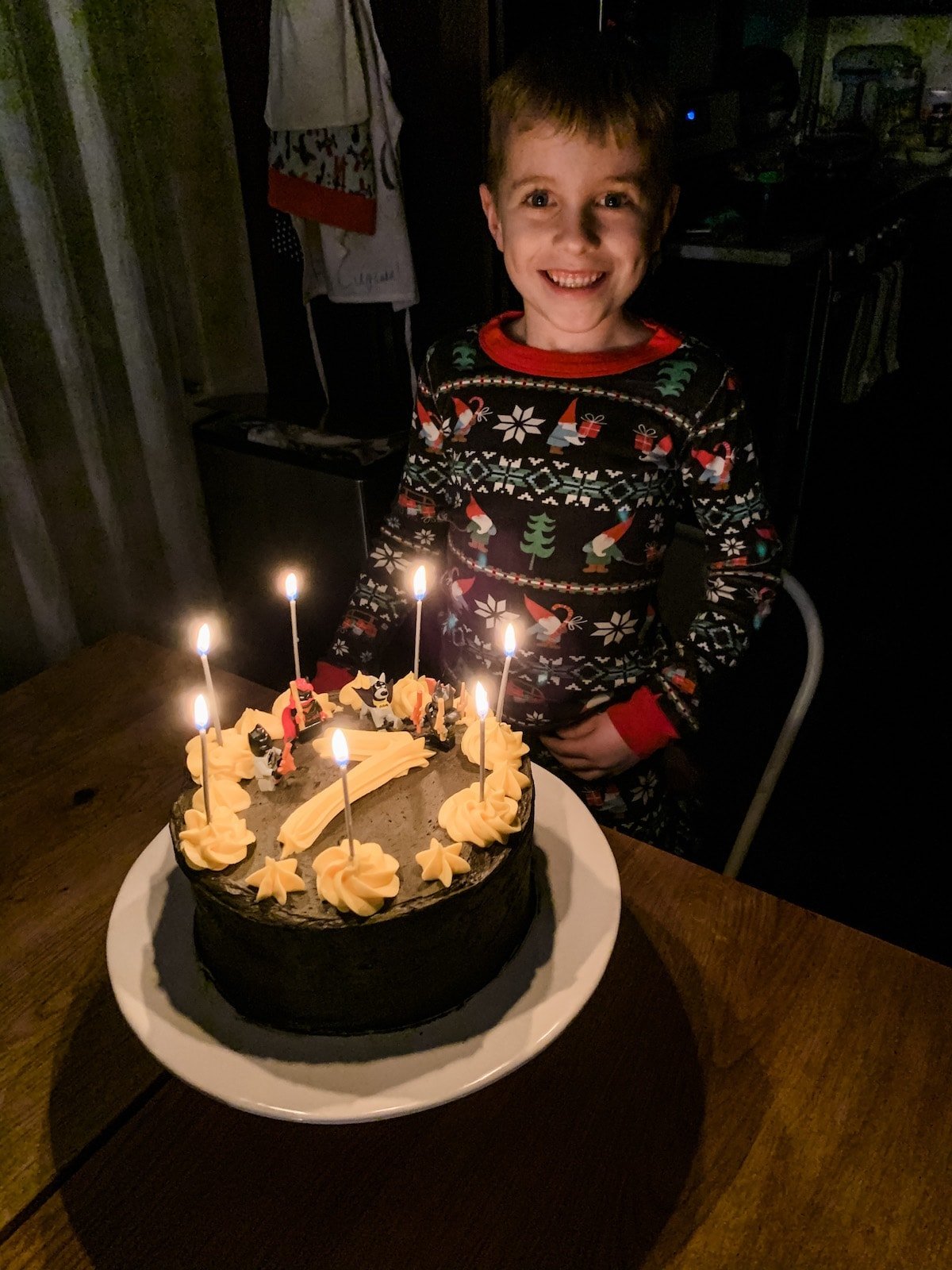 Time isn’t standing still. We are FLYING through the weeks. It feels kind of like a blur or a very boring dream.

The biggest news is Blake turned 7! Our kids are getting old and we aren’t mad about it 🙂 He had such a great day and we had fun celebrating him. He was very particular about his cake he wanted: a Batman cake with specific LEGO Batman characters on top with the number 7 in yellow. Chocolate cake with Black frosting. Yellow decorations. So, that’s what we did! I think it came out cuter than expected. I’m not a cake decorator at all, probably because I don’t have the time or patience, but I was pleased with the 10 minute effort for my son on his birthday. Ha!

For his birthday, Blake got a Lego Space Shuttle, some comfy sporty clothes and a few books. He has been really into the Dog Man series, so we bought him a bunch of those. They are pretty fun comic-type books. He’s already read 4 of them! We are so happy we were able to have a ‘normal’ birthday for him regardless of the circumstances we appear to be in. I’d love to take him out but for the time being we are staying in. Maybe by summer, the city will be able to open up!

About three weeks ago, I started counting my macros and been very careful with my diet. I definitely did have a piece of cake on Blake’s birthday and do have one cheat day, typically Friday night since its the night before my long run Saturday morning. I am starting to see results! We got new batteries for our scale and I’ve lost about 3 1/2 pounds so far. My body has gotten used to the new fuel I’m giving it and just in the last week I’m starting to see little muscles poke through. It’s nice incentive to keep going!  The diet paired with marathon training and a few weight lifting sessions are working wonders!

Remote learning continues to be an interesting experience all around. I so so wish my kids were still going to school, but all things considered we’re doing pretty good! There are subjects that Blake doesn’t like and isn’t afraid to share his opinion with the world (his poor teacher….well ME and his poor teacher) and Eddie is slowly coming around to talking with his teachers on zoom. Still doesn’t love it, but he’s gotten used to it. Brooke is thriving and wishes she could do school like this year round because she’s done by noon. She consistently works hard and is a great self starter. Thank goodness for Brooke!

We laid the smack down on Porter and his sleeping this past week. His weight has been on the low side and the pediatrician had us see a gastroenterologist (remember that?) so we’ve been working hard to fatten him up. This means feeding him a bottle when he woke up in the night. Anything to get him extra calories! But recently, he’s been waking up more and more frequently. So, since he’s felt much heavier to me, I decided to sleep train him AGAIN. Basically respond to night crying after 5 minutes, then 10, 15 and 20 minute intervals. The first night he was mad and screamed for an hour (with us checking on him frequently) but that second night, he slept 12 hours straight! It was glorious! I think we’ve gotten a good thing down and finally there is some consistency with it all.

In other news, Porter almost has those two bottom teeth poking through his gums! I feel them under there, I’m just waiting for them to pop up. It’s only a matter of days! He is also rolling around like a champ, reaching for toys and is pretty close to crawling too! Time to get some baby gates! Gosh, we sure love our Porter-bug!

This past week, we finally FINALLY received some items we ordered a long while ago and I wanted to share them with you!

This board game is so so awesome! It’s called Weird but True from National Geographic. It’s fun, everyone can play and it’s interesting and educational. We all loved it and have played it several days in a row! It really is fun.

I ordered some clear lazy susans to organize my cabinets and its been such a game changer! I used to store all my medicines and vitamins in larger baskets in my cabinet, so I had to pull the entire basket down to find what I was looking for. Now, I have them organized in two lazy susans. It’s not only a space saver, but its so much easier to find what I’m looking for! I’m telling you they will change your life. I bought four! Two are in my cabinet, one is on my table, holding online school supplies and the third is in my bathroom! They are brilliant.

Since Porter is sleeping longer stretches at night, I needed to get booster pads for his diaper to ensure he wouldn’t wake up early because he was wet. So since we’ve gotten those, his sleep has gotten better! I remember getting these for Eddie too.

I just got a Kindle PaperWhite in the mail and have fallen in love with it! I used to have the kindle app on my phone but the problem with that is I’d get distracted too easily by all the things on my phone. So the kindle has been a game changer for my reading habits. I’ve been so happy with it. Gordon even asked me to get him one too because of how much I’ve raved about it. So he has one coming in the mail too. I got the waterproof ones because we have four kids and I thought it couldn’t hurt, but they do have cheaper options.

Brooke and I took a brush lettering class a while back and we both enjoyed it! So much so that I ordered some brush pens and paper to practice with her. I love that its an activity we can do together to get creative that doesn’t involve a screen. These are the pens I got and the pad of paper can be found here.

My next long run is into the double digets! 10 miles! It’s been a while since I’ve seen that number but oh well! I knew my mileage was going to be ramping up and here we are. To be expected when you’re training for a marathon.

Gordon is heading into a long week of the midnight shift. I feel so bad because its hard to get his biological clock on the midnight shift schedule. Also, hard for us to stay quiet upstairs when he’s sleeping downstairs. Oh well. We will figure something out.

More online school for the kiddos! Still trying to navigate these waters, but feeling more and more comfortable with it each week.

Hopefully more sleep! For everyone…but mainly me and Porter.