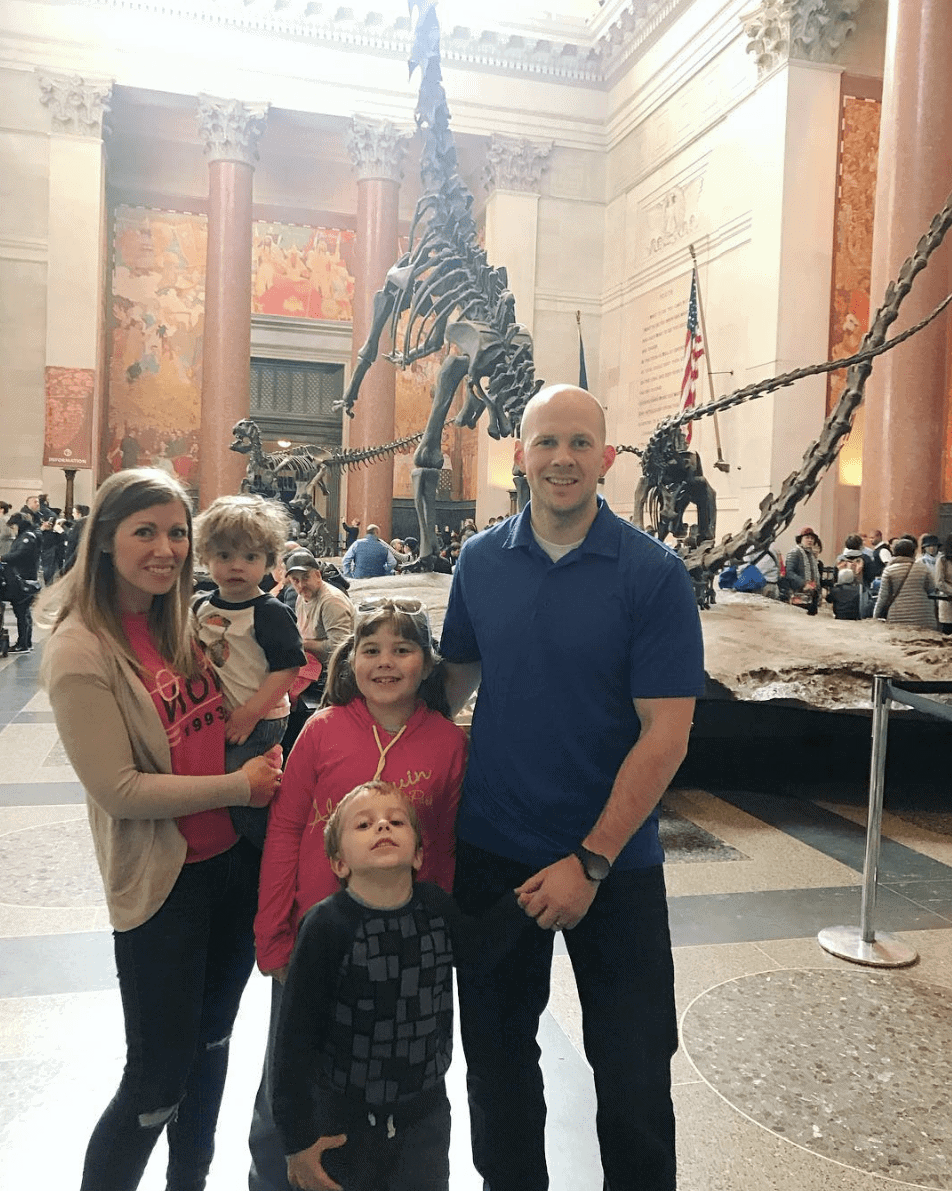 Spring Break 2018 was this week! And we made it through!

Like I stated above, both Brooke and Blake had the entire week off for Spring Break! The first part of the week was awful because it was SNOWING, but by the end things started to warm up enough for us to go outside and enjoy. The only good thing we got to do while the snow was coming down was cuddle up together, pop some popcorn and watch some movies. I did have other plans, but the snow ruined those, so I didn’t feel the least bit guilty about hunkering down and turning on the DVD player. A lot of times I do feel guilty for having the TV on but Spring Break is the exception to the rule and I just rolled with it. Brooke loves watching the British Baking Show with me, which I love, and Blake and Eddie are perfectly content sitting with their legos, playing together. It was great!

One afternoon, after the snow had melted, we went to our favorite ‘blue pad’ to scooter and run around. I have no idea what the place is called, but its a big open area that is paved (or maybe painted?!) blue. It’s completely enclosed and not usually busy in the least, so we love walking over to play. After we got bored with that, we went across the street to the park and played until dinnertime. By the time we walked home, Gordon was there ready and waiting, much to the delight of all three children. Oh how those three love their Dad!

Friday night, I went to Mad Dog & Beans for a girls night. Yes, a girls night!! Be proud, you guys. I’VE MADE FRIENDS. The guacamole there was delish. The ladies I was with really liked the blood orange margaritas too, but since I don’t drink, was quite happy drinking my water and hogging that guac 😉 PS- their churros are so so good too.

Saturday, we were finally able to make our way to the American Natural History Museum on the Upper West Side. We’ve been meaning to go all week, but the snow and then a few later naps for Eddie changed our plans. The stars aligned on Saturday, and we arrived around 3pm. Turns out, that was the best time we could have gone. No lines and hardly busy!! The museum closes at 5:45, so we didn’t have a TON of time, but as it turns out, we were ready to leave at 5 anyways.

Eddie loved the space to run around and was pointing every which way. Lots of animals and things to see! Blake loved anything and everything related to the dinosaurs. His eyes were HUGE when Gordon would read to him about how big or how heavy each dinosaur was. And actually having the fossils right in front of him was a great learning experience. Brooke mostly loved seeing the cute baby animals. She was a little taken aback when she learned what taxidermy was (haha!) but quickly shrugged it off. We probably got through half of the museum, but are excited to go back! Ticket prices are a little high, so I ended up purchasing a Membership, so each time we visit, it’s free. (Of course it’s not technically free, but you know what I mean.)

Some of the exhibits do cost extra, but the main parts or ‘halls’ of the museum are included in our membership fee. Gordon and I want to go back and see the Space exhibits/movie and Brooke and I will hopefully head back to see the butterfly Pavilion before it changes in May.

Below are some of the photos I snapped at the museum! 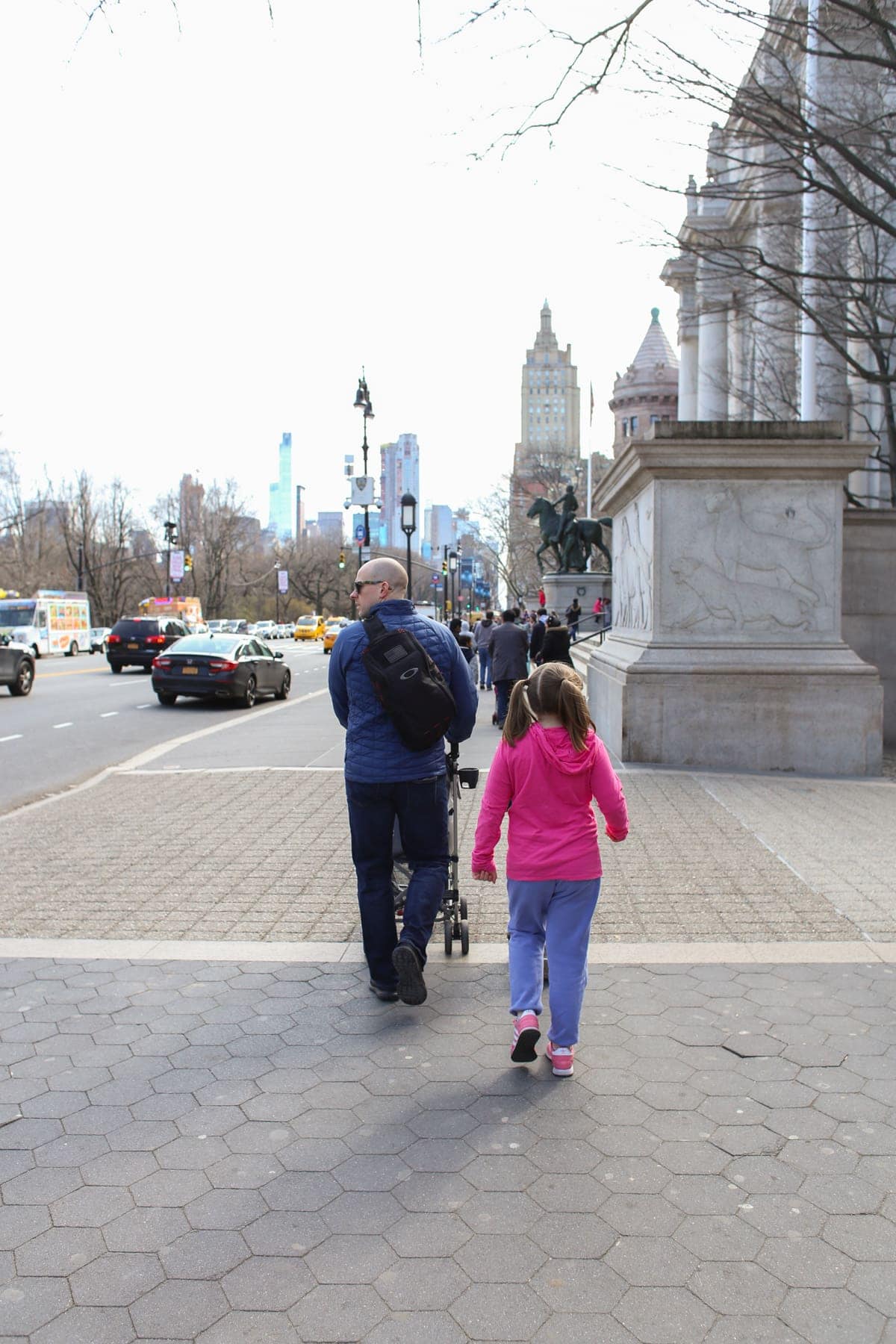 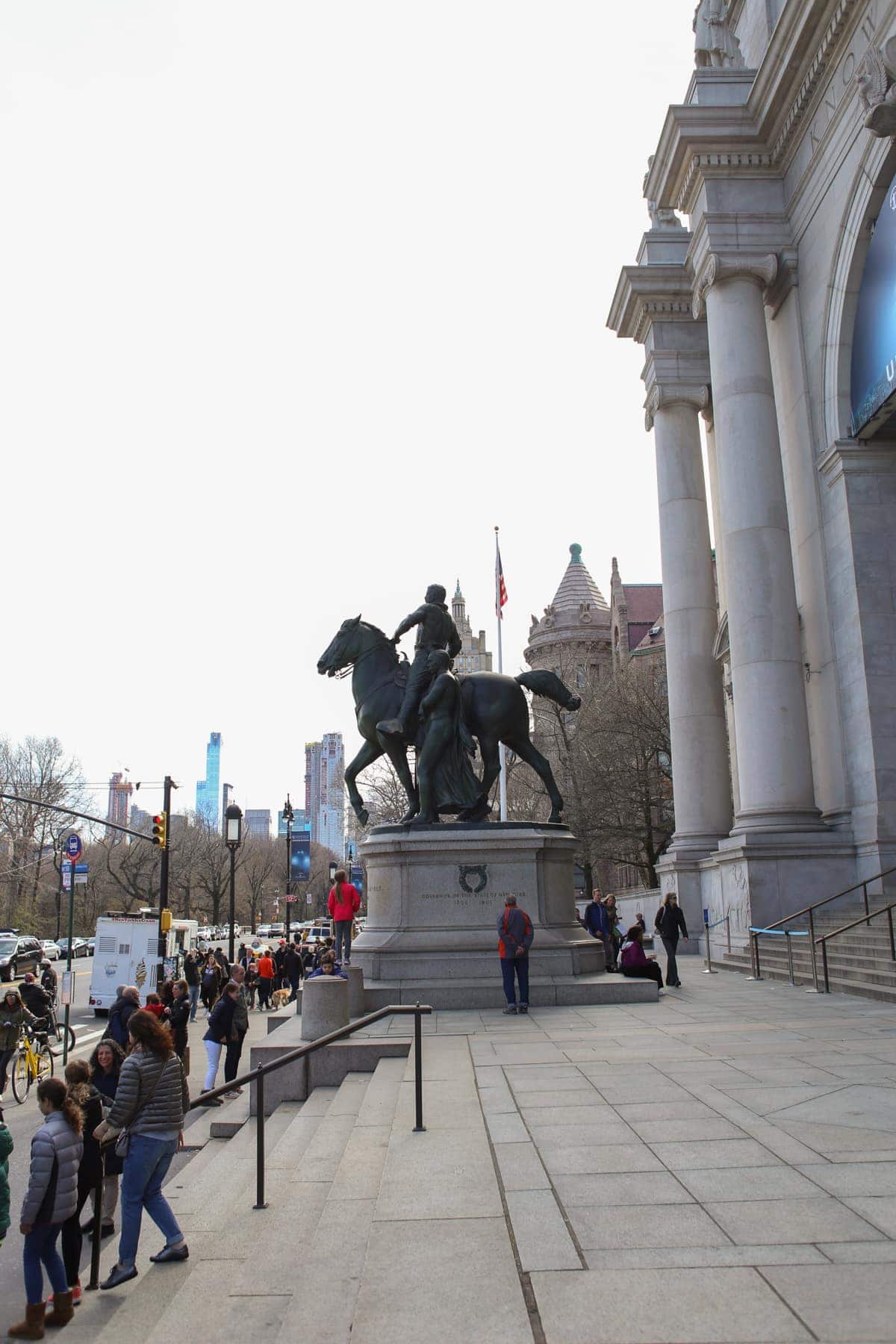 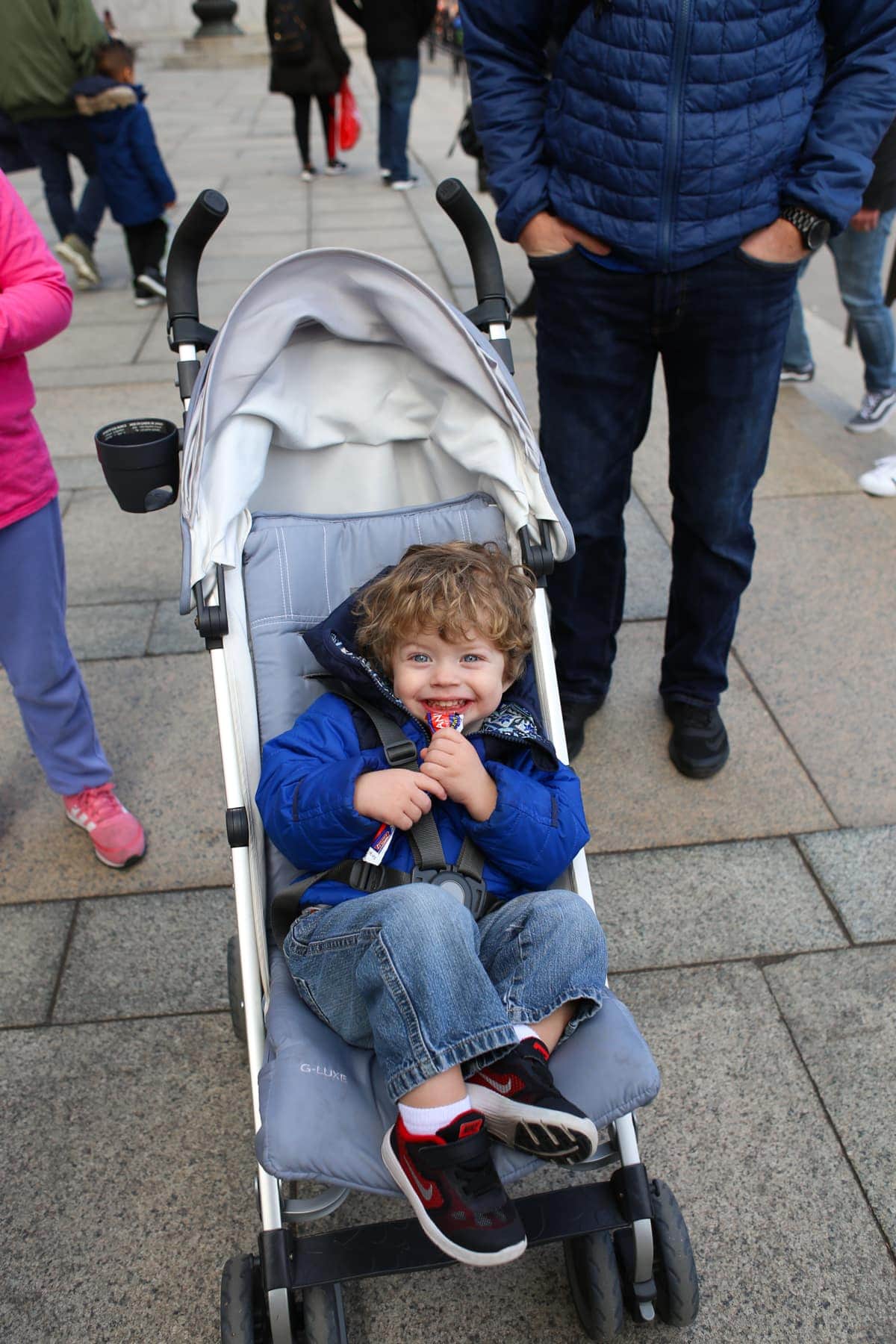 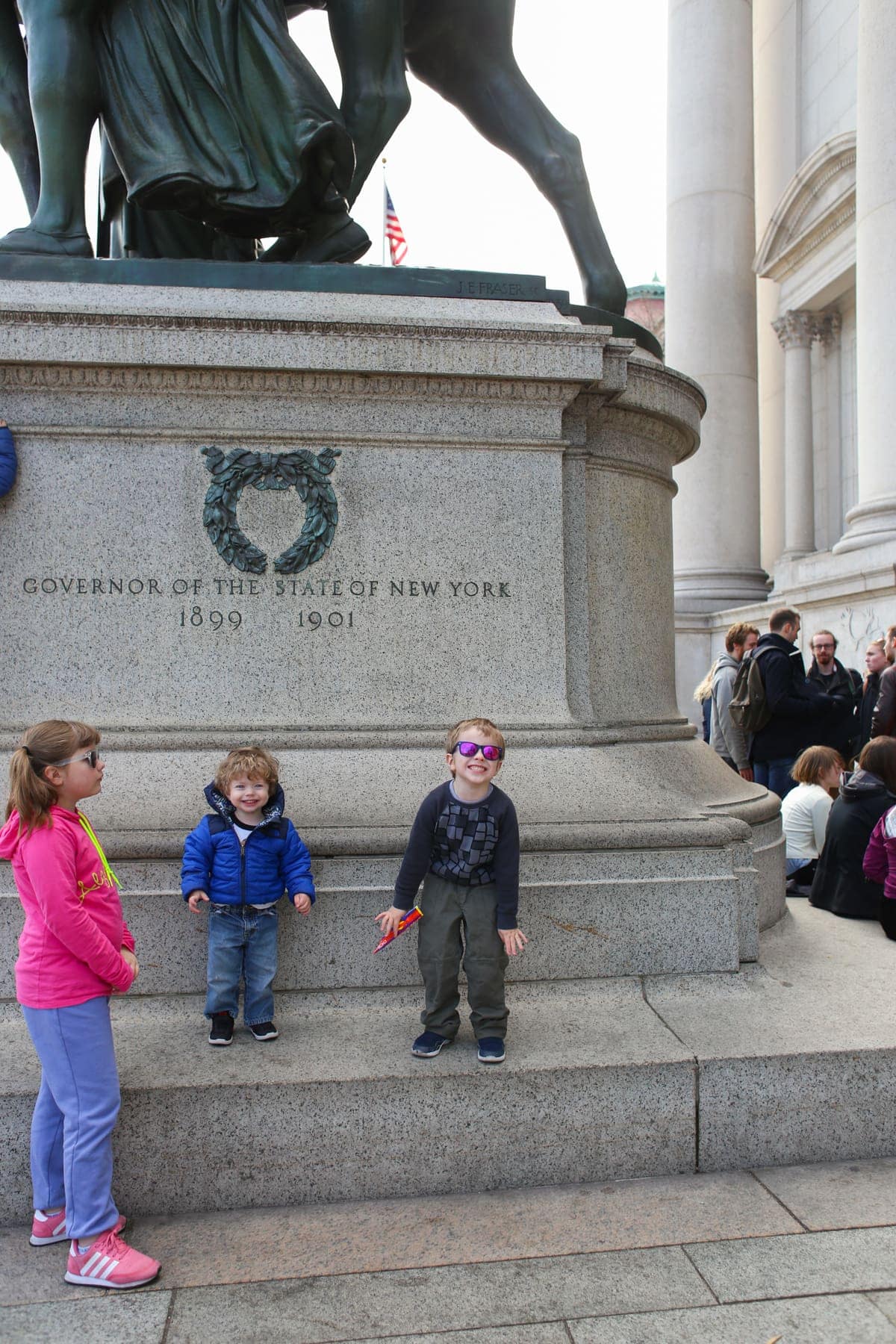 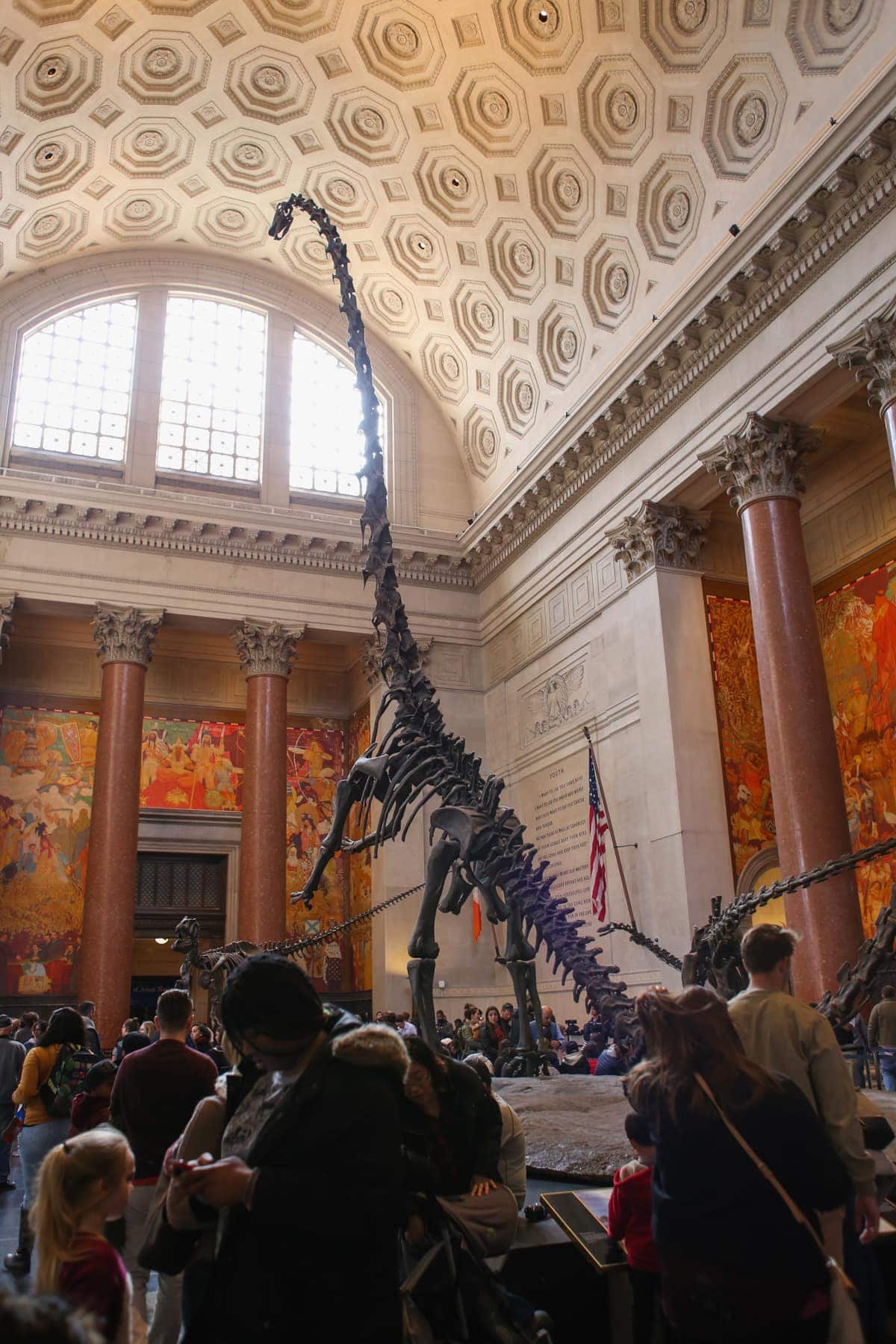 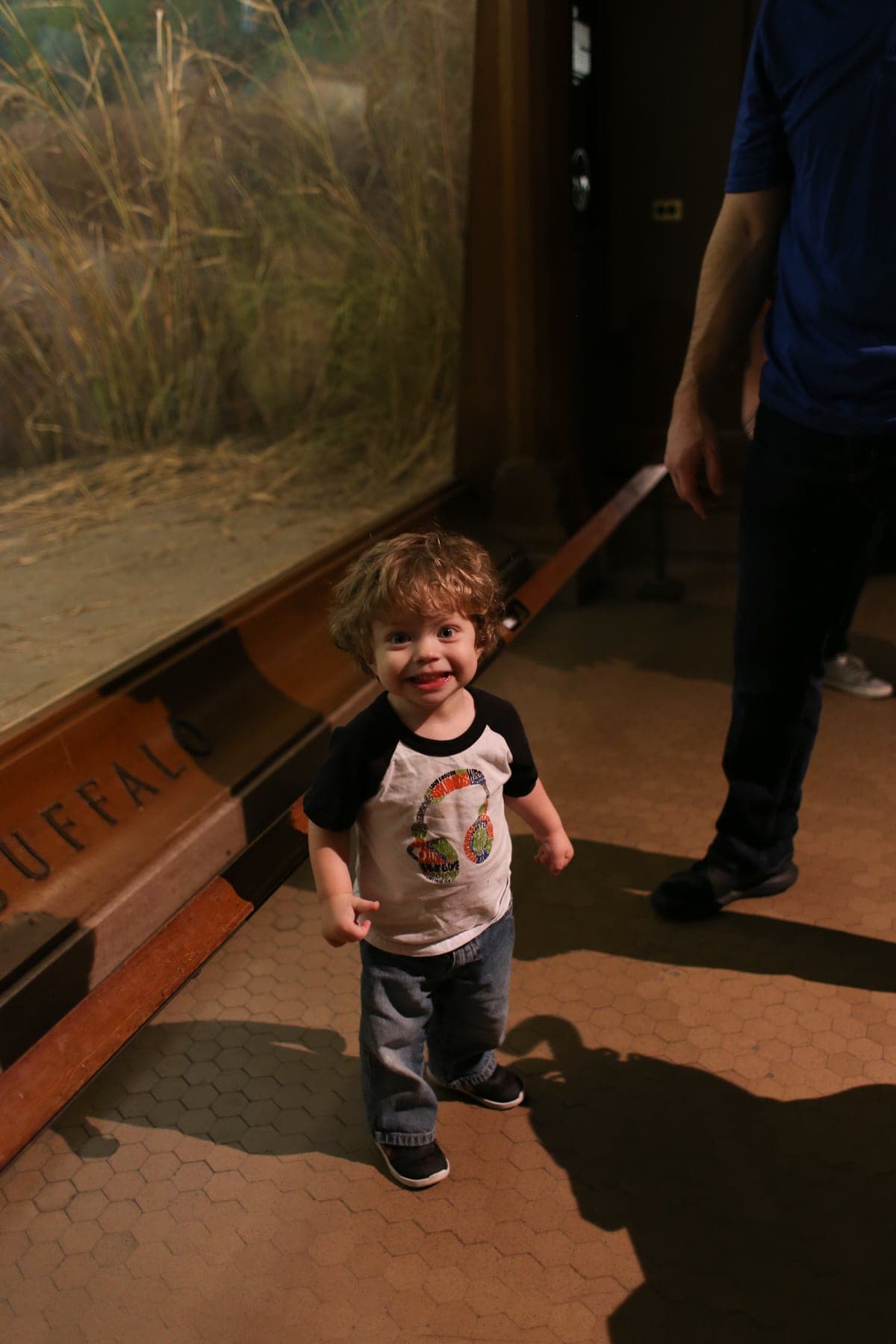 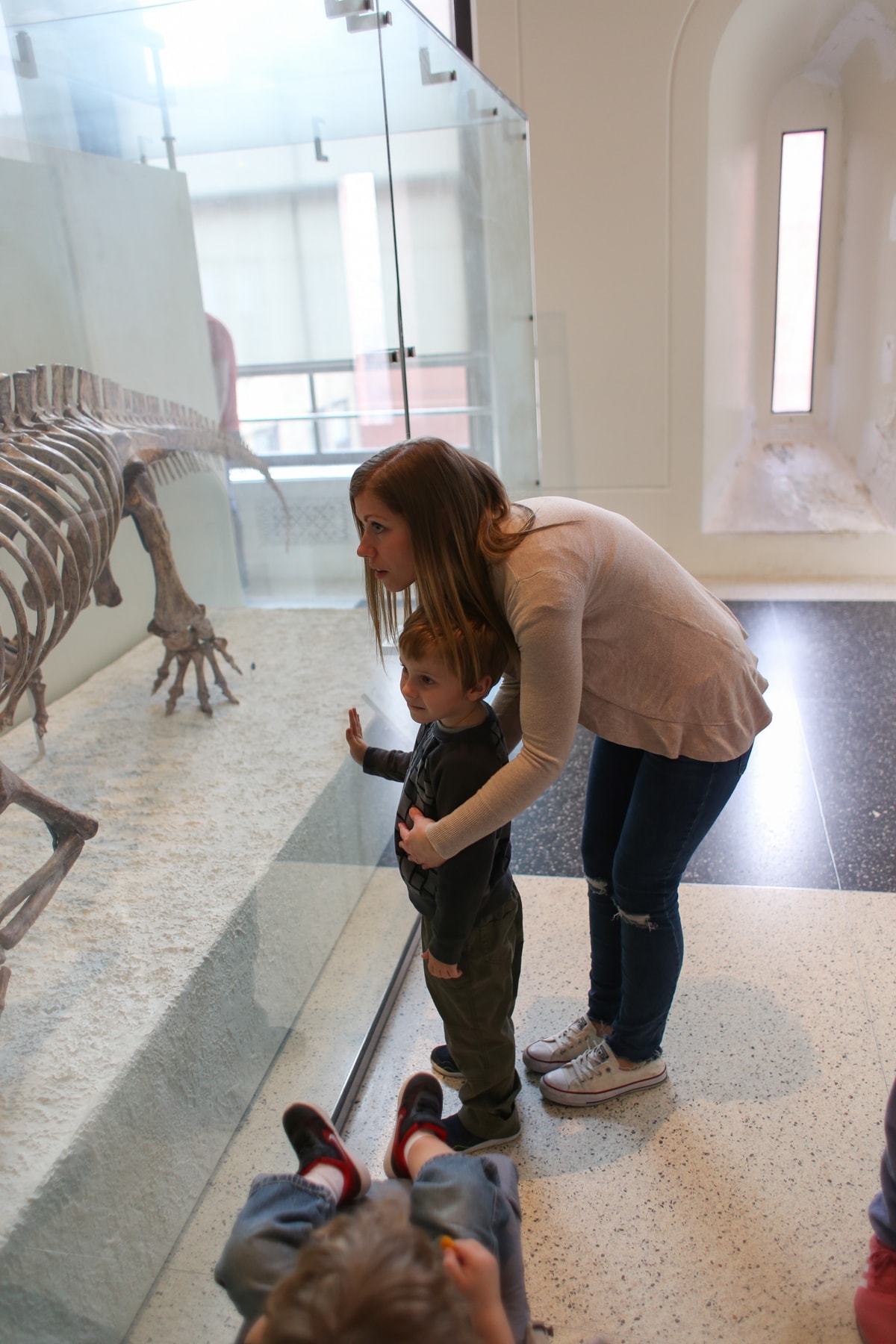 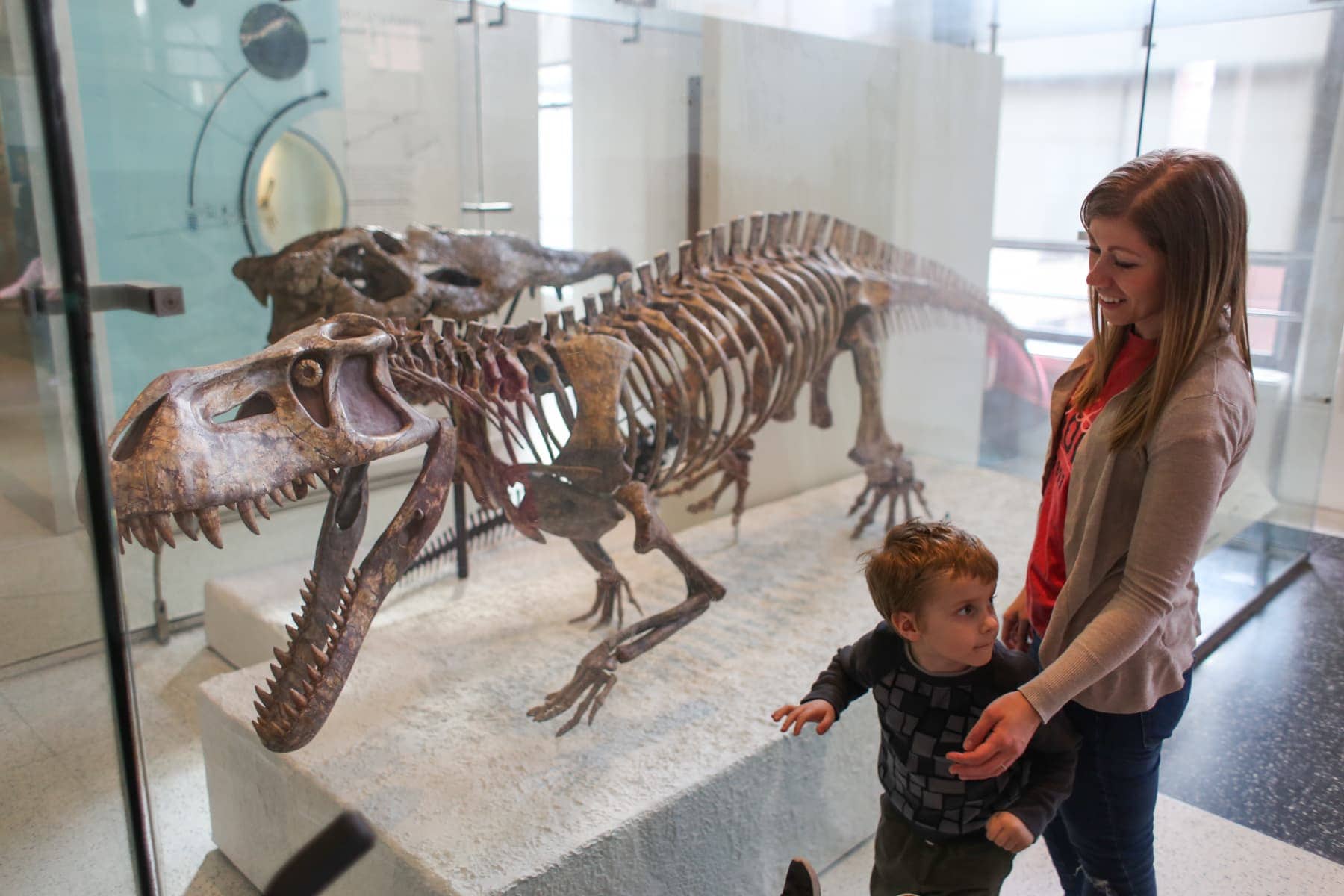 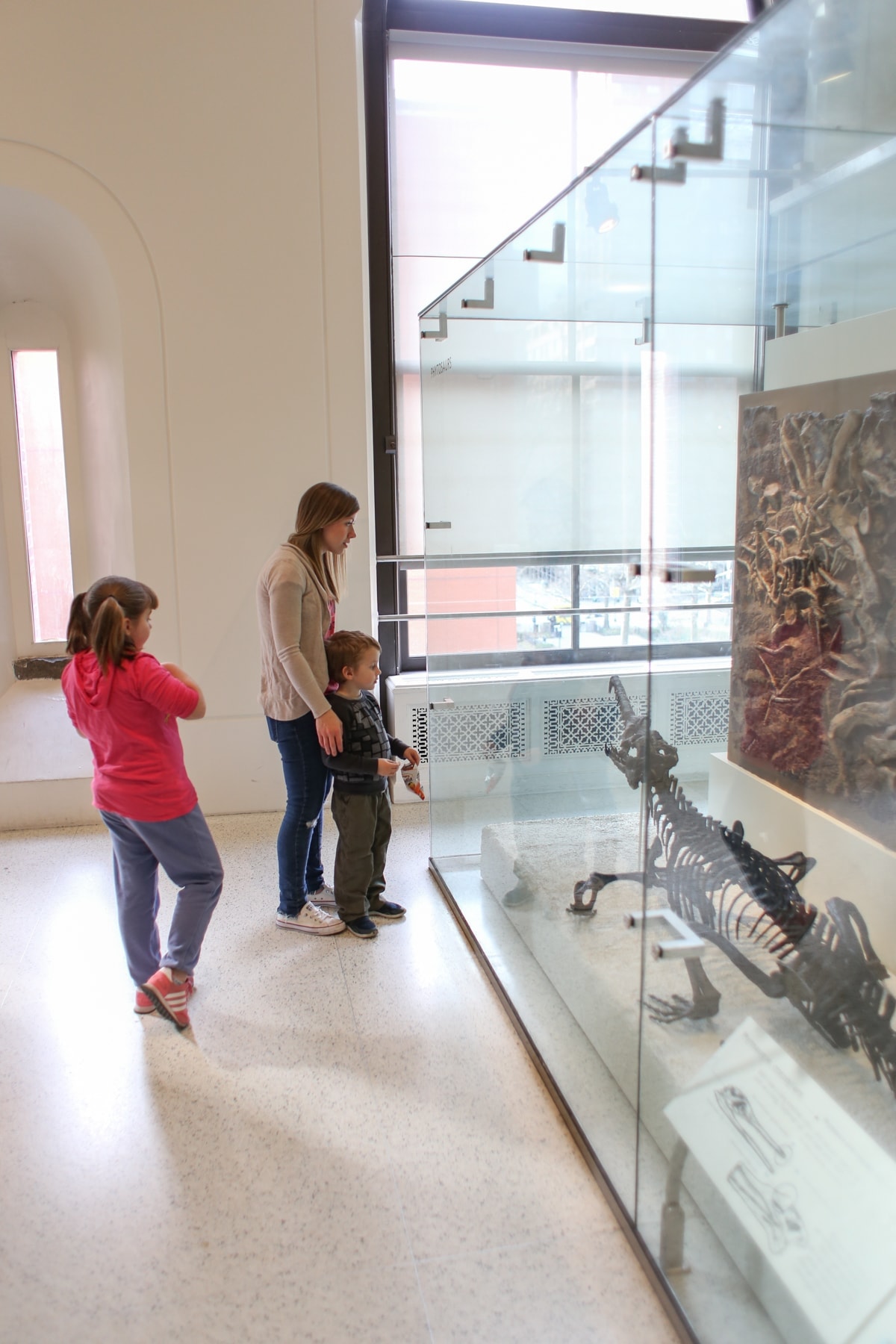 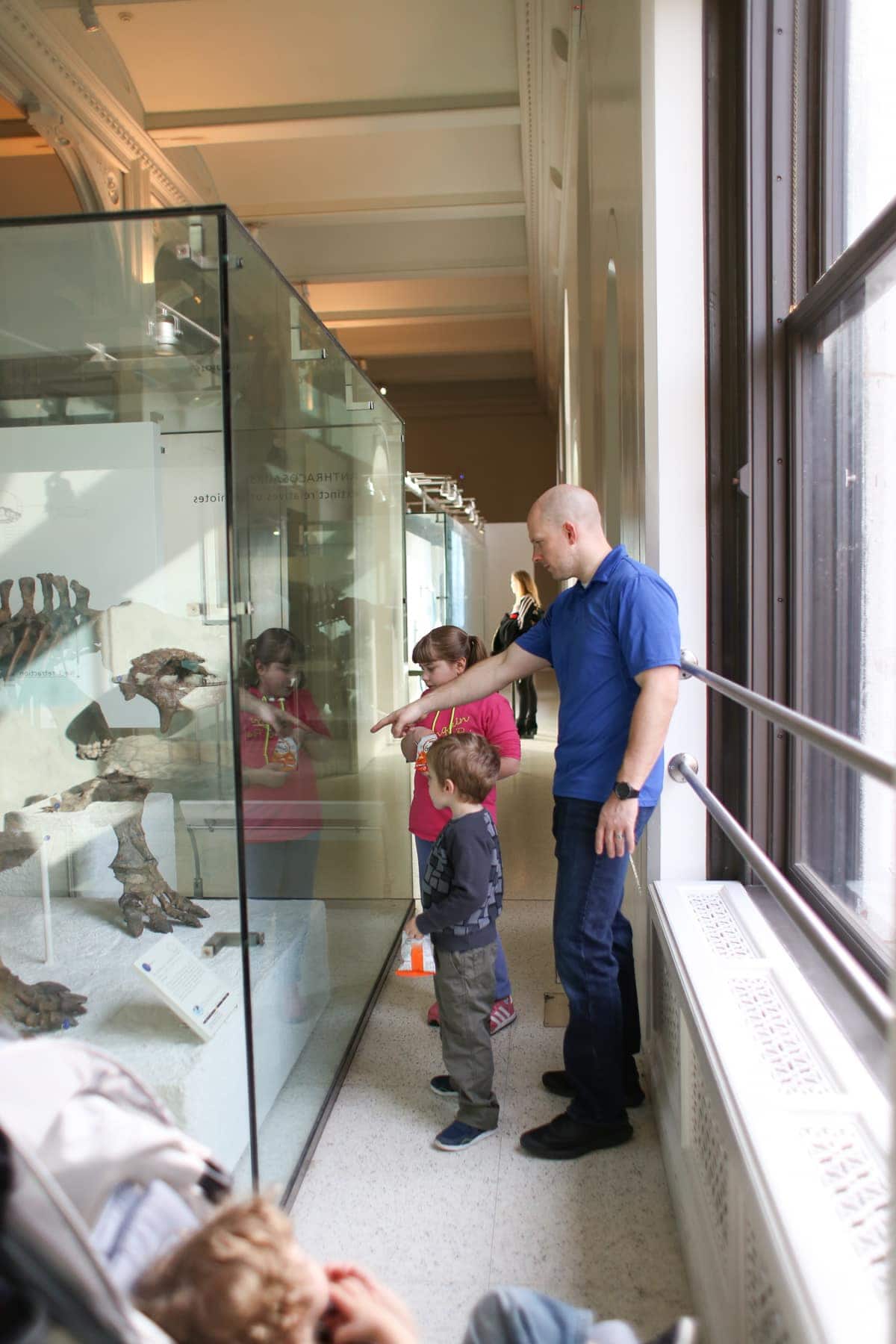 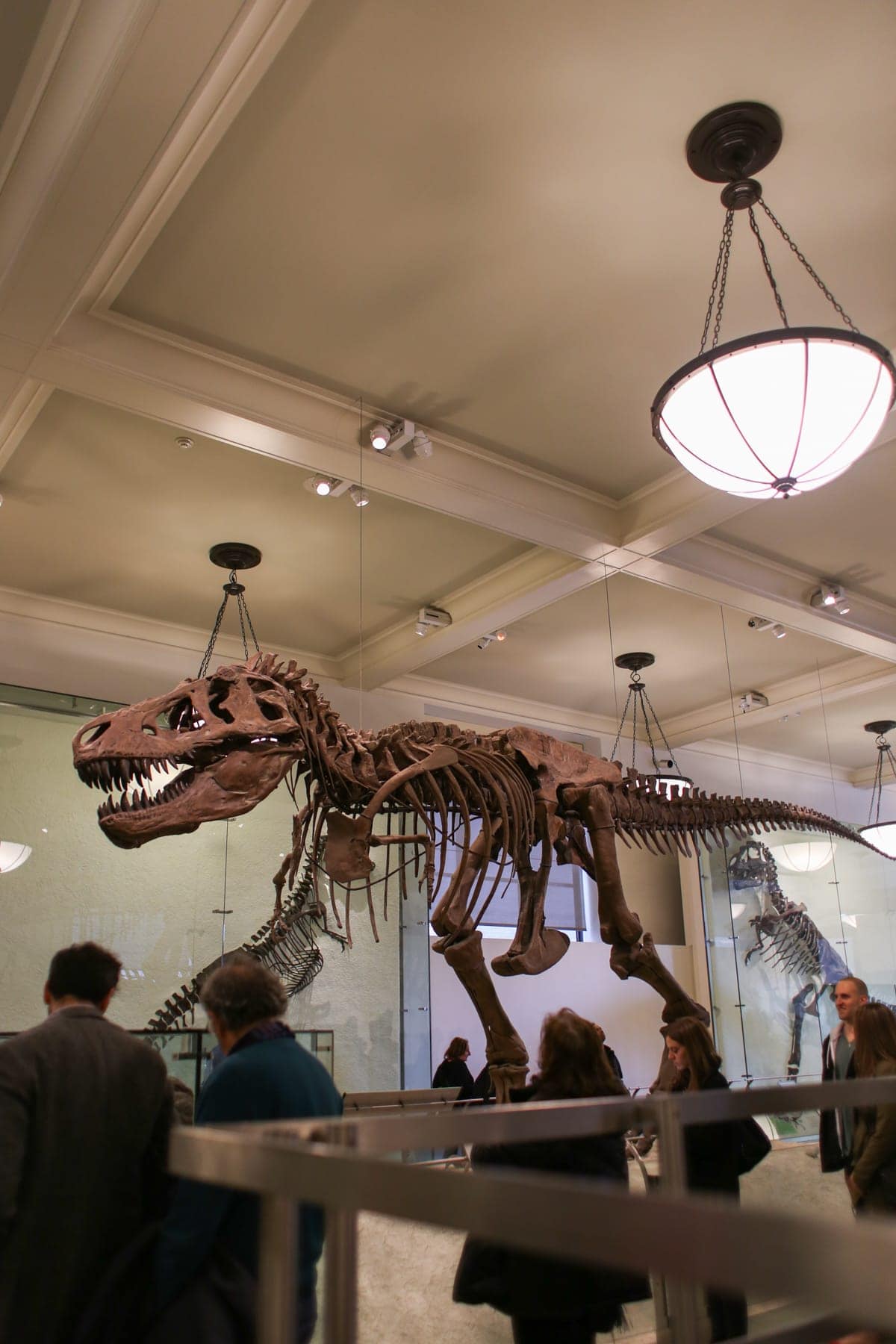 Saturday night, we stopped for dinner at Serefina with our kiddos (at 77th & Broadway). It was really close to the museum, so we thought we’d drop in and see if they had a table. I was really nervous to see if they were a kid-friendly restaurant or not. Sometimes you can walk in unassumingly and get some serious glares and stares. But, they were VERY kid friendly, and even had a section where we could park our stroller (with a bunch of other strollers.) It was GREAT! Kids ate their pizza and my husband ordered the chicken parmesan which, by the way, was the size of a huge dinner plate, 14 inches across. It was enormous and delicious! He got a side of spaghetti, which was EVERYBODY’S favorite part. There wasn’t enough pasta! Brooke didn’t want to try the spaghetti, but Gordon convinced her and after having the smallest bite said “Mom, don’t take this the wrong way, but that’s the best spaghetti I’ve ever had.” I was just happy she LIKED something made with pasta. I ordered the Serefina burger and fries. It was just fine 🙂

Sunday, Gordon had to work (normal for him these days) so I took the kids myself to church. I was pretty darn proud of myself! I was up early, changing the boys, feeding them all breakfast, getting myself ready, packing snacks, packing our church bag, etc.. We were out the door, clean faces, teeth brushed, hair combed by 8:15. We walked over to the subway station, took our train to church and made it there only 10 minutes late! Haha! If the trains hadn’t been late, we would have been totally EARLY, but they were late. Oh, New York. Even though we were late, I was still proud of myself. Mostly for being able to get up early, even though I hadn’t slept well the night before.

And now, here we are, back to Monday. Another week to slay! 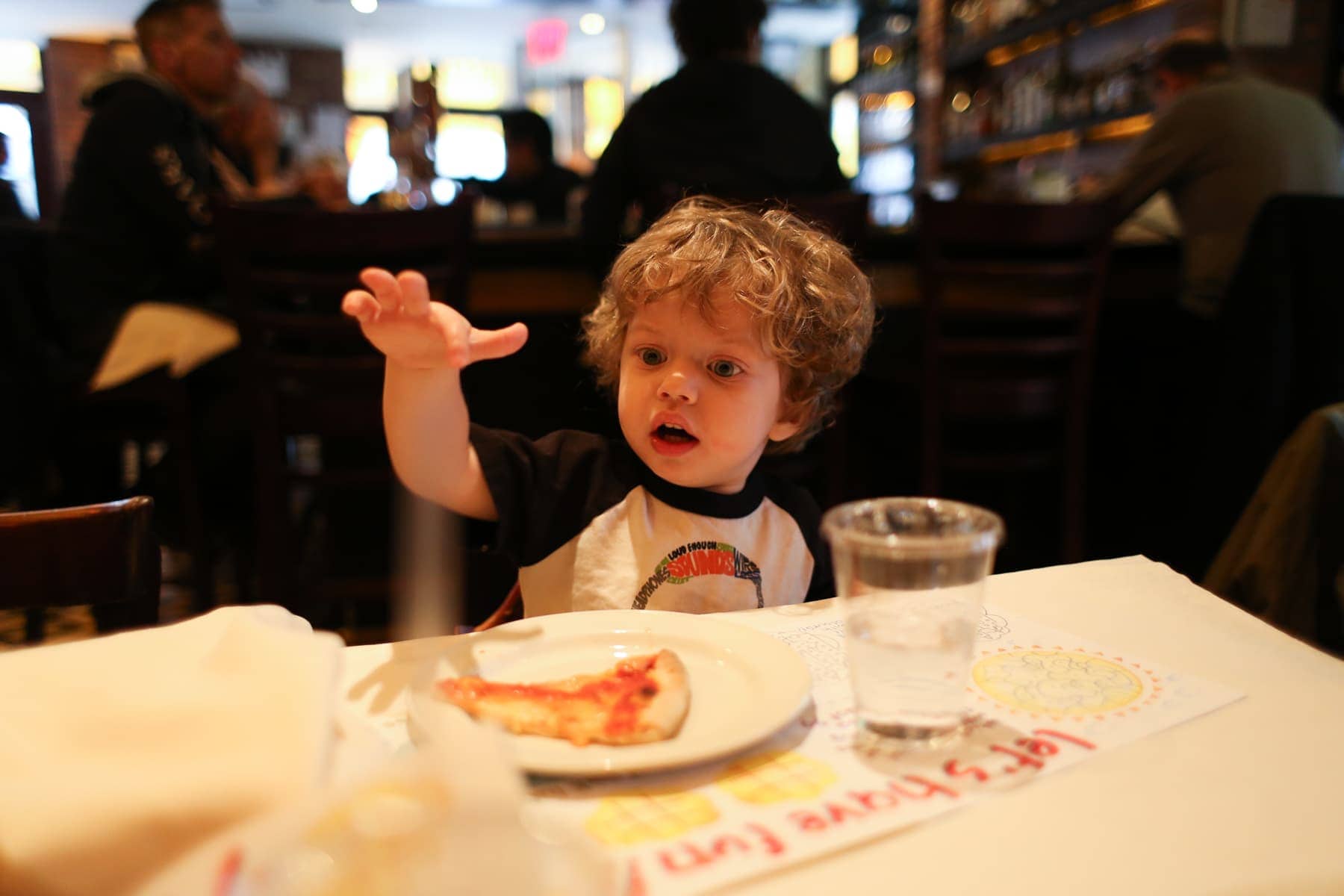 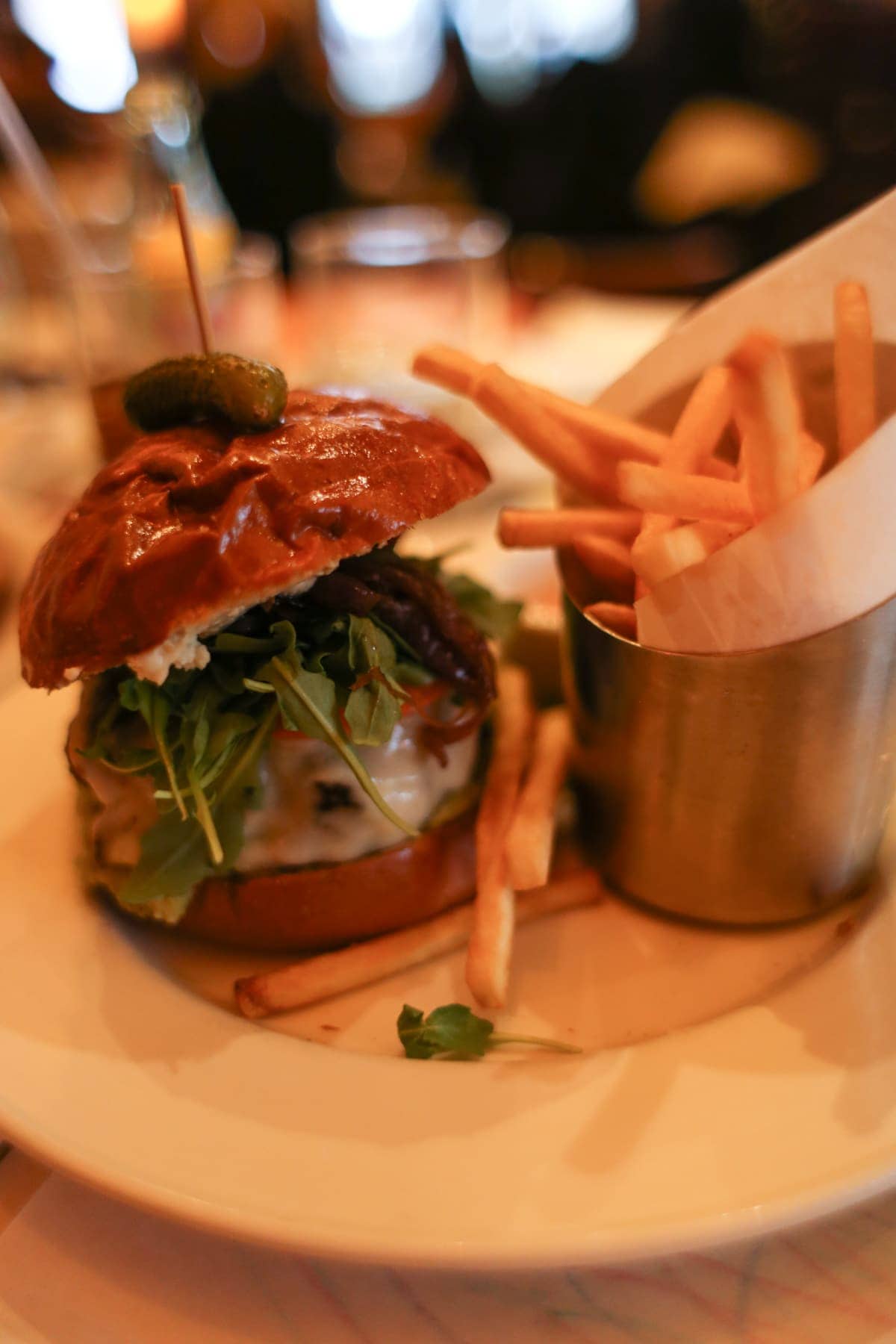 Kids are back to school! Woot woot! I love me a schedule.

Gordon has a few days in the office this week, so we’ll be seeing more of him! YES PLEASE.

Thursday, I’m going to see the dermatologist! She’s adjusting some of my medications for my face, I think…and possibly doing another chemical peel. Read more about that here.

I think Gord and I are going on a date Friday, so holla!

My little sister is coming for a quick visit this weekend too, so we’re all pretty excited to see Aunty Chelsea 🙂 I might try to go see a show with her somewhere, but which show to see?! There are so many good ones.

I think that’s it for now! Have a great day, friends! xo