I’m trying to remember everything we did and not a lot is coming to mind. How boring are we?

One of the highlights for me was this killer guacamole that I just posted the recipe for. Guacamole is my spirit animal. It was so so good! Cotija cheese is the freaking bomb.

Since the weather was pretty nice, I did a lot of recipe filming this week! I have to edit said videos still, but mama’s got babies to take care of! So at some point, stay tuned for those on Facebook. And most likely Instagram.

I think we went to the park three times this week and somehow without fail, every child of mine got soaking wet every time!! Even on the cooler days when I was wearing two sweatshirts. I kept saying “aren’t you cold?” because lets face it: I’m ALWAYS cold, but they are warm blooded creatures and take after their father and were allegedly “totally fine”.  WATER BABIES THEY ARE!

We have suspended Eddie from his scooter until further notice orrrr until he will listen to us when we say “BRAKE”. We are 80% sure he can use the brake properly, but he chooses not to. He ran into a parked car on the way home from the park one day last week and scared himself half to death. (Also, us.) Normally, he is good about stopping or jumping off or dragging his foot behind him if he’s going too fast or thinks he’s going to bump into something, but his scooter confidence got the better of him and he just went BAM right into it. So Gordon carried him home kicking and screaming. Ah the joys of parenthood. 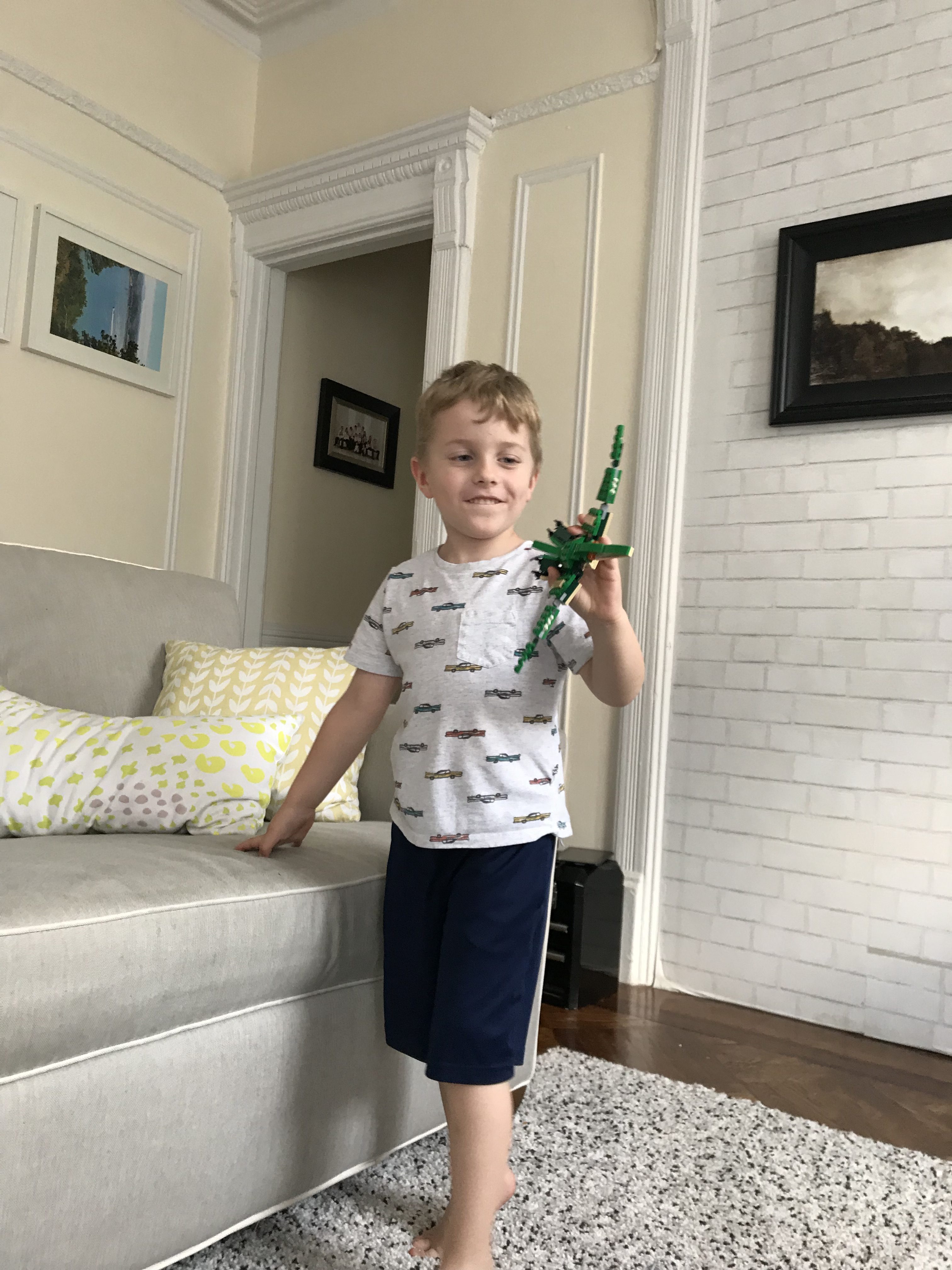 My iron levels are getting better, I think. Felt a little more ‘normal’ the past few days. If I’m feeling particularly tired or exhausted, Gordon is quick to follow up with “did you take your iron?” Not sure I mentioned this, but I wanted to feel like myself again before I continued with the low carb diet I was doing. It was like it added insult to injury, so I’m waiting for my levels to come up so I can get back into it.

Blake continues asking daily to go to the lego store so he can get more lego sets. “Mom, isn’t there a Lego store in Manhattan?” I keep telling him “no” because he got 4 new sets for his birthday and our floors do not need more lego pieces! So Thursday, we rebuilt one of his lego dinosaurs into a pterodactyl (and I became the coolest mom ever). I find the pieces and he follows the book and builds it step-by-step. He is such a smart boy!

Friday we did pizza in the park again!! I love love love this tradition so much and I was so glad it was warm enough. Hooray for mini heat waves! We tried Pizza Pete’s and it was YUM. I have yet to find pizza I don’t love. I think it’s all about the fresh mozzarella they use and the thin crusty crusts. SO good. A trip to New York is worth it just for the pizza.

I finally got my free School Lunch Guide up and running…just in time for school to let out. Wheeee! You can download it for free here.

This weekend is a long weekend and we did nothing. Unless going to Starbucks counts? Gordon had to work all weekend long, so Saturday we cleaned and unpacked the rest of the boxes, hung up more picture frames, took a nap and watched Father of the Bride (I love that movie.) Sunday, I took the kids to church, tried to keep them quiet to no avail, dropped them off to primary, taught youth sunday school (and bribed with treats!) and walked home…in the rain. Again with no husband.

Today, Monday, we went to the park again for nearly 3 hours and yes my kids got soaked. Gordon was home this morning, so he went running while I watched the kids at the park and then I went running while he watched the kids at the park. It’s a great little system but would be even greater if I could run longer than 1.5 miles without feeling like I want to die. I used to run a lot before I had Blake, but then I decided I hated running, so I quit. But now, I kinda/sorta like it…but mainly because there are so many people out running with me and I like to people watch. You always know you’re safe and there’s always someone you can pace yourself with. Plus the tourists are hilarious to watch.

Here’s what’s coming up this week:

Getting some more things crossed off my to do list.

I rescheduled my facial and massage for this week. Cross your fingers and toes I can make it!

Still on the hunt for a good speech therapist for Eddie. Maybe I’ll get lucky again.

Can’t believe we’re into JUNE this week! This year is going by pretty fast.

Finally found a babysitter, so date night is going to happen this week!! Hallelujah.