Another one bites the dust.

I finally got an evening without the kids so I could get my massage and facial this week! And they were glorious. I fell asleep in both appointments which is both amazing and embarrassing all at the same time. So relaxing!! And I don’t even want to know how much gunk was removed from my face. It was a lot. Can’t wait to go back in another year. Haha! Just kidding…hopefully it’ll be sooner than that.

Late one night, I was on Sephora, avoiding going to sleep, and ordered some products. When they showed up a few days later, I was confused because I didn’t remember ordering anything…turns out it was really late and I should have just gone to bed. Except I made some good choices! If you have keratosis pilaris, also known as chicken skin, also known as those red bumps on the backs of your arms or the tops of your thighs, then this body scrub is for you! I’ve used it once on the backs of my arms and while the bumps were’t completely gone, I could definitely tell a difference: skin was definitely softer and not as pronounced. I’m excited to see the progress after a month! I have hope this stuff will help. I also ordered this and this wrinkle cream from Estee Lauder. I’ve heard good things about their brand and both products have really high ratings. The night cream I haven’t noticed a huge difference yet, but the Perfectionist CP-R Wrinkle Serum is amazing! I have fine lines around my eyes that really bother me and I could notice a difference after day 1. I use the night cream at night (obvs) and the serum in the morning. After a month, I’ll keep you posted. I love skincare much more than makeup.

I am usually unable to run or exercise outside when my boys are with me everyday, so I started looking up youtube workouts and I broke out the old P90x dvds we have. Man is it hard!! Yikes. And I forgot to mention that our downstairs neighbors hate us because my boys are loud and run up and down the hall all the time….aaaand maybe because I forget they’re mad and then do the plyometrics DVD. Oops! (That’s a bunch of jumping for exercise, incase you were wondering.)

Thursday, I noticed Eddie was starting to cough and he had a mild fever. Nothing too terrible or unmanageable, but then on Friday he woke up feeling so awful and the croupy cough was so obvious that I had to take him to Urgent Care. I was positive he was going to need a breathing treatment based on how loud he was breathing, but the doctor said his lungs sounded great even if he was breathing loudly. Then came the fun part where I had to plug Eddie’s nose to get him to open his mouth so they could swab his throat and test for Strep. (If he followed directions a little better, then we wouldn’t have had to plug his little stuffed nose, but alas, he still struggles.) But, SO GLAD the doctor thought to test him because it came back positive. So off we went with our prescription to the pharmacy and then home. I gave him a dose as soon as we got home along with some tylenol and he went down for an early nap because he was just so sick and tired, poor little thing! 24 hours after being on his antibiotics, the doctor said he wouldn’t be contagious anymore, so I was only hyper-paranoid about the hand washing and sanitizer for a day. His appetite is about 50% what it used to be, but he still has coughing fits here and there. But no one else in the family has gotten sick, so I’m counting those blessings.

Friday night I started having a sore throat and was positive it was going to be strep too, but Saturday morning I woke up with a hint of a soreness. Sunday it was gone. I think it was a miracle. I did take a bunch of vitamins and gargled with salt water Friday night which could have helped as well. God bless airborne.

Saturday marked the 1 year anniversary of me packing up my kids and driving across the country to New York City by my lonesome. You can read my more detailed instagram post here about it. I miss Boise and all the space, but am grateful for how far we’ve come. (And the fun part is you can read about the week we were driving across the country and the week before when I was going crazy. I love doing these weekly family posts!)

Since Gordon started working midnight shifts again, me and the kids tried taking the bus to church on Sunday. Yes, we can walk and have walked every week, but someone mentioned to me that they took the bus and it made me think that we could save time (and possibly energy and mommy’s patience…ha!) by taking the bus. So we did and it was so much cleaner and quicker than the subway! BUS ALL THE WAY. I think we’ll make this a weekly occurrence, except on the really nice days 🙂 Who knew?

I also think it’s important to mention that this southwest salad I made this past week for dinner had a perfectly ripe avocado on top. Usually I can never catch them, but this one was perfect!! So, I documented it. Haha! This recipe won’t be on the blog, but it’s just a spring salad + kale salad mixed together and topped with roasted sweet potato, taco meat, corn, tomatoes, cheese and avocado. We used salsa as dressing. The boys got little piles of ingredients from the salad on their plates to eat leisurely and Brooke ate the salad as a whole, minus the sweet potato because she says she doesn’t like it even though she’s eaten it before. Whatever kid.

I also found a new park, pretty high up on the upper west side with hardly any people and fountains! So we spent a good 3 hours there one afternoon. Then we went over to Trader Joes and walked home. Long afternoon, but very fun! And Eddie finally got the hang of blowing bubbles. Took him a while to get the hang of it, but he kept at it and made it happen! This is the bubble bucket we have and totally love it! 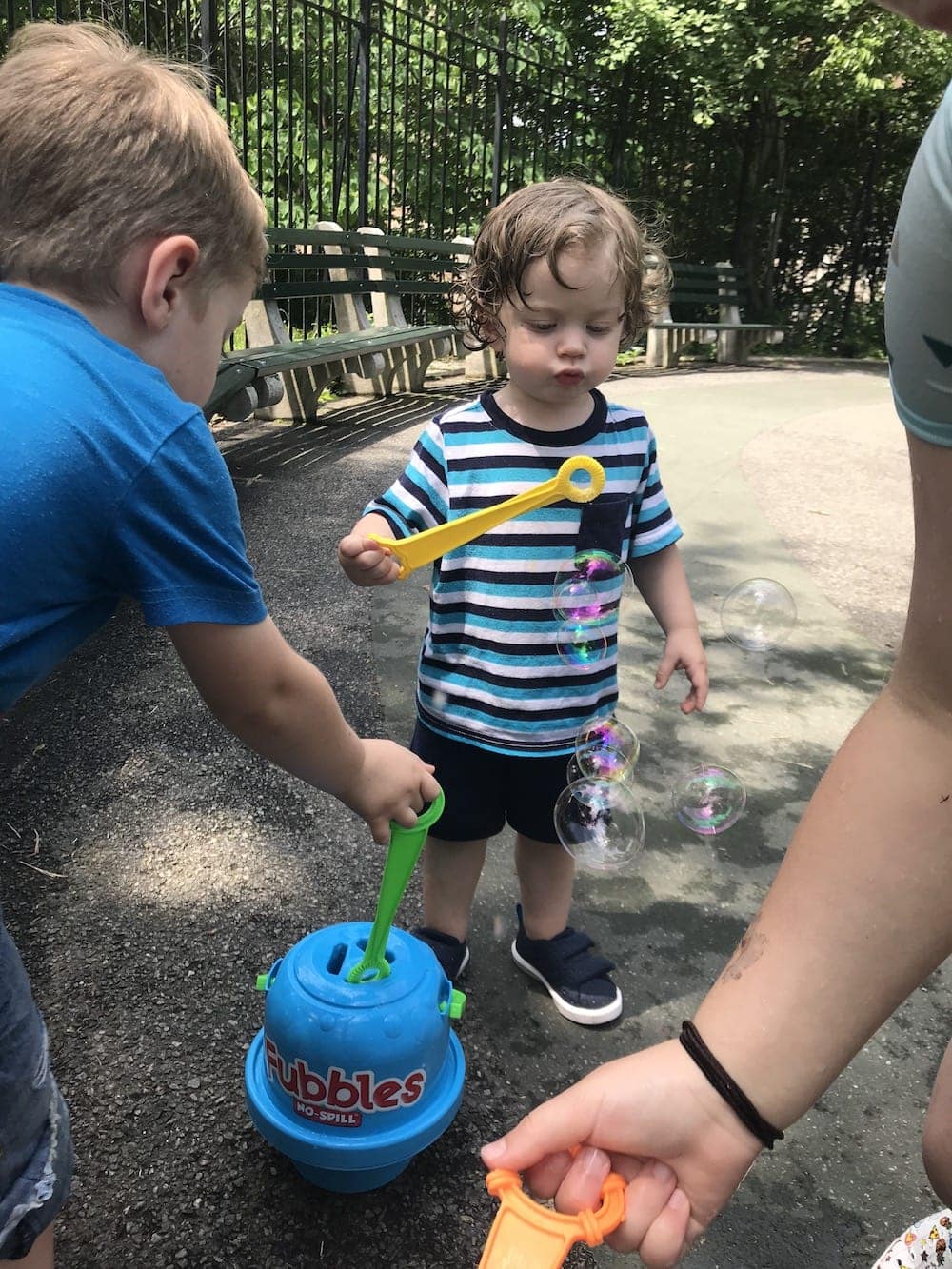 Here is what’s happening this week:

Eddie will hopefully be all better by the end of the week! Fingers crossed!

I am going to attempt to bring all three children to the dentist at the same time on Wednesday morning. Eddie has never been and usually refuses to open his mouth for me when I ask or try to brush his teeth, so this should go really well. Also, Blake likes to scream at the dentist sooooooooo there’s that. I’m going to look like a stellar parent, basically.

Thursday, Gordon and I are going to go on a date! I found a sitter and everything. It’s been about 2 months since we’ve last had a date, so I’m very much looking forward to it.

Thursday Brooke doesn’t have school because…I don’t remember why. So I have to figure out something to do with all three. Wheee!

Friday is pizza and park night and I found a new pizza restaurant I’m hopeful will be amazing! Time will tell.

I’m retesting that rice pudding recipe again, after a few requests. Even though lots of you hate rice pudding, I’m still going to post it because I happen to think it’s delicious!