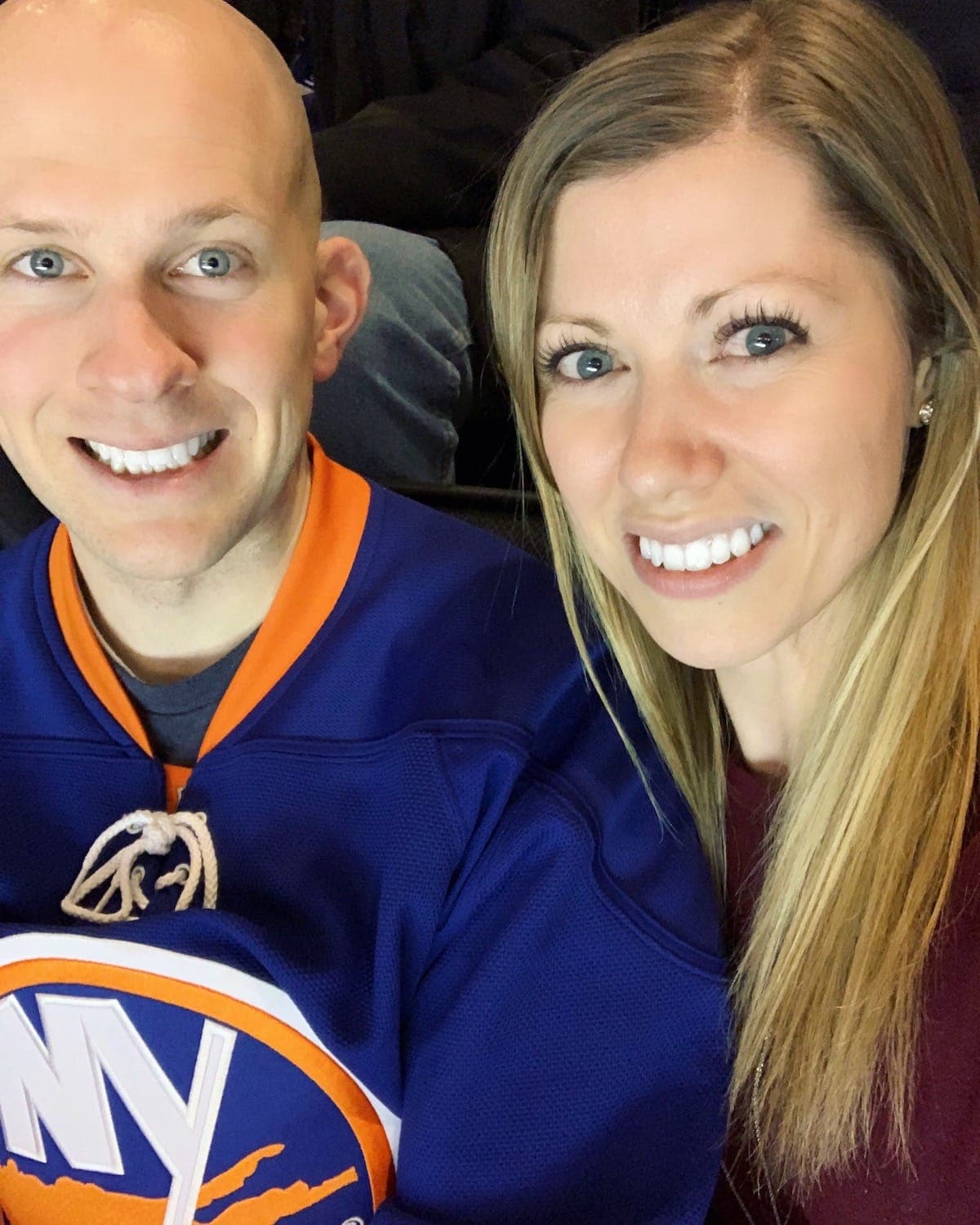 Gordon and I went on a date…shocking I know…to Madison Square Garden to see the New York Islanders beat the Rangers. We’re not Islander fans, but we happened to go with Islanders fans which by default made us Islander fans. There were a few times I thought we were going to get beat up but its fine.

I said this on Instagram but I think it’s worth repeating: you can take the girl out of Canada but you can’t take Canada out of the girl. Hockey is probably my favorite sport to watch live because its fast and I actually know what is happening. Gordon still wants to go to a baseball game and a football game while we are in New York since there are so many sports teams here, so there is potential for me to like those games as well, but so far, hockey is the favorite by a long shot.

Probably the biggest news is I cut Eddie’s hair. Short. A little too short for my liking, but I’m getting used to it. He looks so much older! His speech is quickly catching up with his looks and I can’t believe he’s going to be three by the end of the month! So bananas. Look here to see the most beautiful newborn baby photos of the most beautiful child while I go eat my feelings.

I was actually looking through some old videos of Eddie that were taken almost exactly one year ago. He still had a binky and his speech was nearly nonexistent. I can’t believe how far he has come. It’s so incredible what time and a little speech therapy can do!

Recipe testing continues to roll on and I truly do feel like I’m on a roll. I have about 10 delicious recipes waiting in the wings, including a fabulous carrot cake with incredibly thick cream cheese frosting. I’m still doing the no-sugar diet, but I did have a little fork full of cake and man oh man is it delicious stuff. It might have been the shock to the tastebuds, but I’m pretty sure my carrot cake is my new favorite kind of cake. There’s just something about it.

I’ll be sure to post that recipe sooner than later! Are there any recipes you’d like to see on my blog? I’m trying to focus my January and February content on common, obvious recipes that I don’t have on my blog. Like peanut butter cookies or a basic guacamole.

On Friday night, we tried a new pizza place that opened up right around the corner from us and it was pretty tasty! I got a slice and a greek salad that was fabulous. The kids really liked it too, so this might be our go-to spot since we can get pizza by the slice and keep everyone happy.

On Sunday, our sweet friends invited us over for dinner on Sunday and we had duck! My kids have never eaten duck before, mainly because it’s hard to find if you’re never looking for it, but they mostly liked it! (Eddie just ate rolls.) Brooke mostly liked the orange glaze we drizzled over the top and Blake ate his bites knowing he’d get cake. I’m not gonna lie, it was pretty tasty stuff. Are you duck lovers?

Because it’s been so darn cold these last few days (with no snow on the ground to make it worth it…ugh) we took a taxi down 14 blocks to our friend’s apartment and then a taxi back. Eddie is such a goof in the taxi and loves pointing out random things and talking about them very loudly…enough to make the taxi drivers chuckle. He talked a lot about the “tv’s” and the different colors on the tvs. (There are small screens showing clips of tv shows in the back of most cabs, hence his excitement.) And then he talked about going to school and how he didn’t want to go. Ha!

Speaking of school, I took him last week and this week and what do you know, there were no tears whatsoever. He was happy to go. He is turning over a new leaf with this almost 3 thing. I’m so grateful!!

Brooke and I are going on a mommy-daughter date with some neighbors and we’re going out to dinner and to see mary poppins! Should be a fun night.

I have a school meeting to go to about the middle school application process…because apparently before she’s in 5th grade, there is information we need to know. UGH. Not looking forward to that whole thing. Also, isn’t middle school the worst? I hated middle school, but that might be because it was french immersion.

I’m hoping for another date night with Gordon this week, though if we aren’t eating sugar, WHAT WILL WE EVEN DO? Kidding. Sort of.

I get to see my trainer again this week on Wednesday morning and Gordon I think will see his later in the week as well 🙂 Stronger in 2019! Bring it on!