Vegan Cupcakes are perfect as wedding cupcakes, birthday cupcakes or any other sort of cupcake you need! They are just as good too! 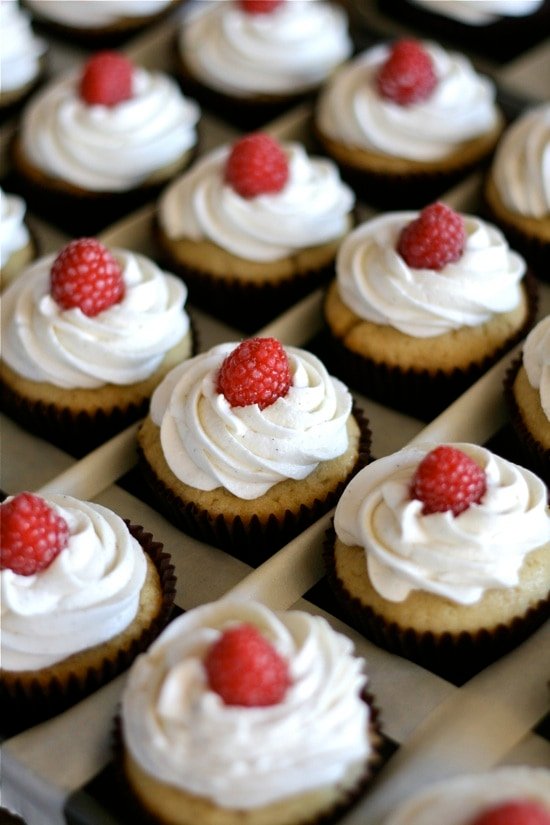 Back in June, I made a truck load of vegan cupcakes for the wedding of a family friend. Clearly I didn’t think this decision through because {1} I don’t have a commercial kitchen {2} I’m a Mom and didn’t realize that I would need time to bake 10+ dozen cupcakes and {3} I’m not a vegan, nor a very good vegan baker and agreed to make THEM ALL VEGAN. Oh and did I mention I agreed to make them all vegan? YEAH.

Umm…what was I smoking when I agreed to this??

Luckily, I did some research and started testing and testing….and testing.

Vegan means no animal products whatsoever. No eggs, no milk, no butter. Seems hard to make a yummy cake without any of those ingredients, right? Well, I’m here to tell you that I’ve found the be-all-end-all of vegan cupcake recipes. One that will please vegans and carnivores alike. {Only took me 17 tries–>literally!} AND, it’s really not that hard to whip out a batch either 🙂 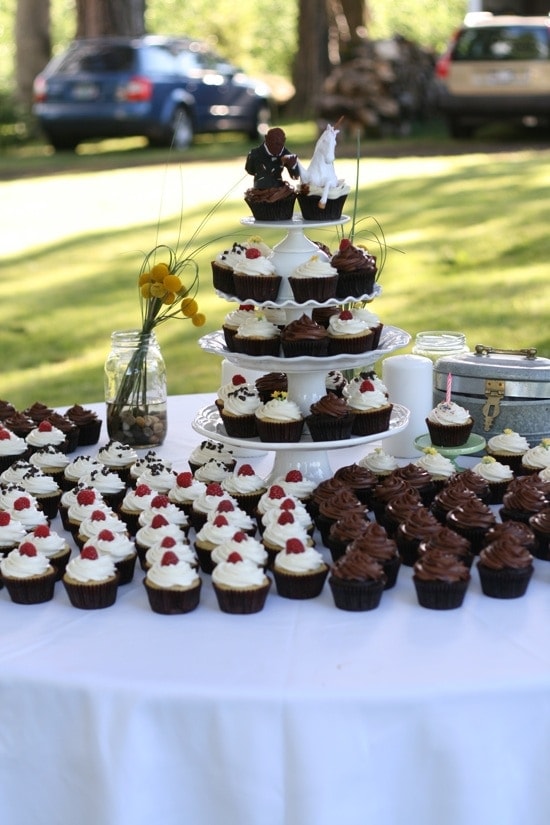 Overall, it took me 9 hours to bake, frost and decorate these bad boys, but it was certainly worth it! After I got them all arranged, I sat back, relaxed, basked in the glory and said ‘let them eat cake‘.

Here are the deets about my vegan cupcakes– 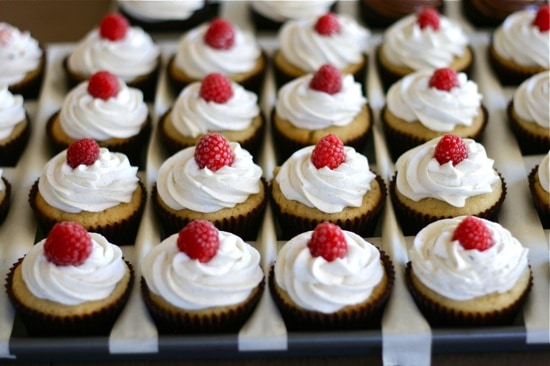 Kind numero uno: Vanilla Cupcakes with Vanilla Bean Frosting–I used the vanilla cake recipe below and topped them with a vanilla bean frosting and a fresh raspberry. About the frostings, I made these in such huge quantities that I don’t have exact measurements but here’s what went into the frosting: coconut oil, vegan shortening, butter extract, vanilla extract, vanilla beans and powdered sugar. 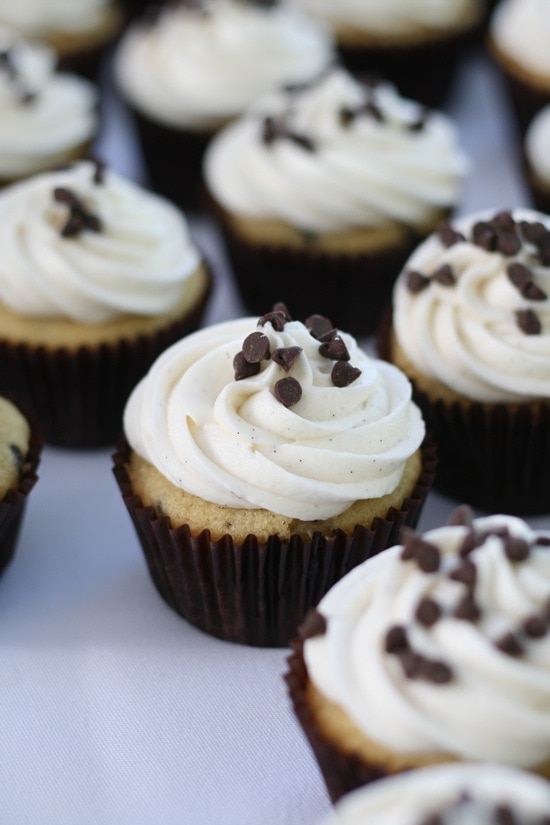 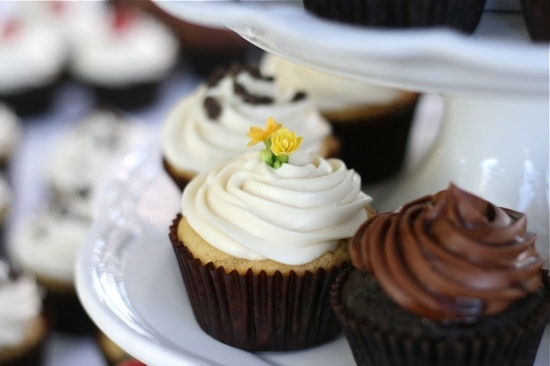 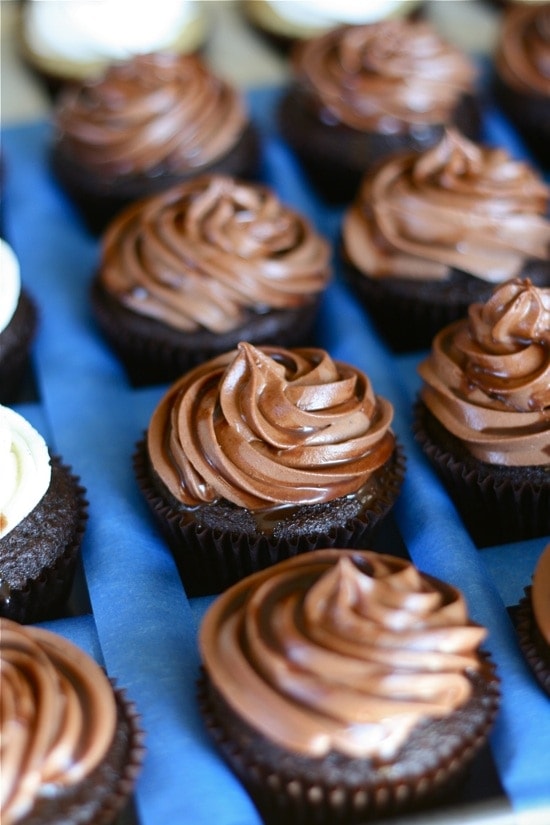 So that’s that! And of course here’s a fun picture of some of the Brennan’s who attended the wedding. I sure do love all these people! And the ones not pictured too! Also, isn’t my husband adorable? I think so.. 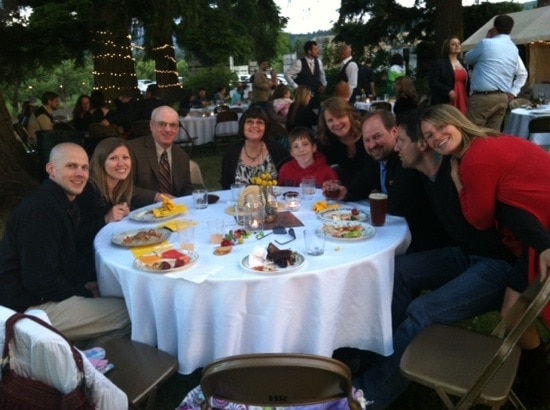 PS–here’s a great tip for transporting a zillion cupcakes you just decorated: make a grid with masking tape on a cookie sheet. It will keep the cupcakes separate and still give your hands enough room to take them out. A cheap-o way to get around buying a bunch of cupcake boxes. 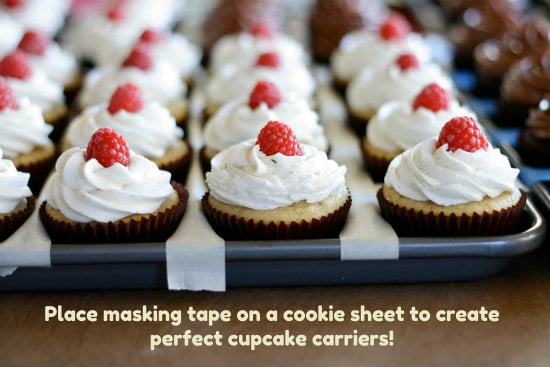 PrintPrint Pin ItPin It
5 from 12 votes

Adapted from HolyCowVegan these Vegan Cupcakes are perfect as wedding cupcakes, birthday cupcakes or any other sort of cupcake you need! They are just as good too!
servings 12 cupcakes
Prep Time 15 mins
Cook Time 20 mins