I’m so excited to announce the birth of our third child, Eddie!

This sweet boy was born Thursday, January 28th at 4:26am. He was 7 pounds 13 ounces and 20 3/4 inches long with a 13 1/2 inch head. Labor and delivery was a breeze compared to my last two pregnancies and believe it or not, the same doctor who delivered Blake {who I ADORE} was on call to deliver Edward. And we even delivered him in the same room as Blake too!

Here are more details of how things went down; feel free to just scroll through to see the pictures 🙂

So, Tuesday and Wednesday I was having contractions on and off that weren’t really getting anywhere; just more of an annoyance reminding me that I was still pregnant. I had a doctor’s appointment on Tuesday afternoon where I had my membranes stripped and then reassured that my baby would, in fact, come out soon. Tuesday night I started having contractions after my husband left to pick my Mom up from the airport. That was an interesting few hours! Nothing came of it, but it was fun trying to figure out who I could call just in case this baby decided to come early.

Wednesday, I was having contractions more periodically but nothing to write home about. I took Blake to Fred Meyer in the morning, rested, went on a few walks trying to make things happen, but again, nothing beyond my usual contractions here and there. So we put our kids to bed and started watching a movie around 9:30. I started having a few more painful contractions around this same time so I timed them: 15-ish minutes apart but lasting anywhere from 45 seconds to 1 1/2 minutes. By the end of the movie, they were more like 10 minutes apart, getting more painful but still lasting the same length of time. So around 11:30 we decided to head to the hospital.

I got to a triage room around midnight and things started to pick right up! I was a 4 upon arrival and then after an hour was a good 5 with my bag of water bulging. I officially was admitted at 1:30 or so and got my epidural shortly after that. The epidural only ended up working for my legs so they gave me more medicine and after that, it worked amazingly well 🙂 I did have a few ‘hot spots’ where it felt like the epidural didn’t work from time to time but besides that, it was all good. My water broke when I was at 7 cm and my contractions slowed a little, but then came back pretty quickly again {but I couldn’t feel a thing!} I was able to rest pretty well between 3 and 4 am, but did feel more hot spots, which I later realized was pressure from the baby’s head! At 4:10, they checked me to see where I was at and of course I was fully dilated. So the nurse and the doctor came in, got me ready to push and said “try a practice push” so, I did and they were all like “stop stop stop!” Apparently, my pushes were so efficient that I had to wait so the doctor could at least get some gloves on to deliver the baby! So we missed pushing on one contraction while the doctor got ready and then Edward came out really quick after the next two pushes! It was the easiest labor and delivery ever. Right after he was delivered, he was put right on my chest and he stayed there for at least an hour just doing skin to skin. Then we were both cleaned up and transferred to the mother-baby unit at the hospital. 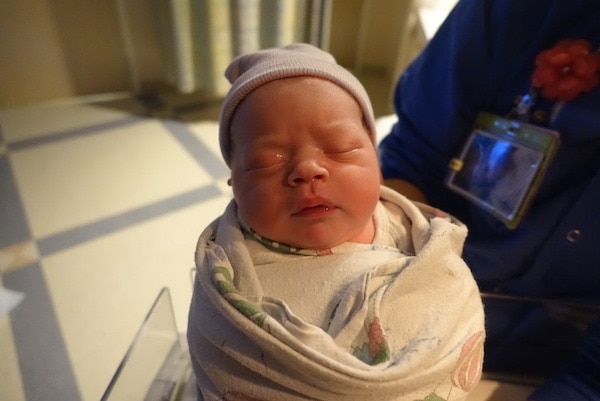 Immediately when we saw him, Gordon and I were both surprised at how much hair he had and how cute and defined his features were. His look is very similar to Brooke’s look as a newborn. He has dimples, though you can’t tell from these photos, and his hair is dark, but looks blonde underneath. We’re thinking he might turn into a blondie 🙂 He also has blue eyes, a double chin and 1 teeny tiny roll on each of his thighs.

This boy is hard to put to sleep but once he is asleep, he’ll go for 5 hour stretches. His cat nap game is on pointe and he has a bit of a witching hour in the evenings between 6 and 8 pm where he’s just cranky. Besides that, he is the epitome of perfection! 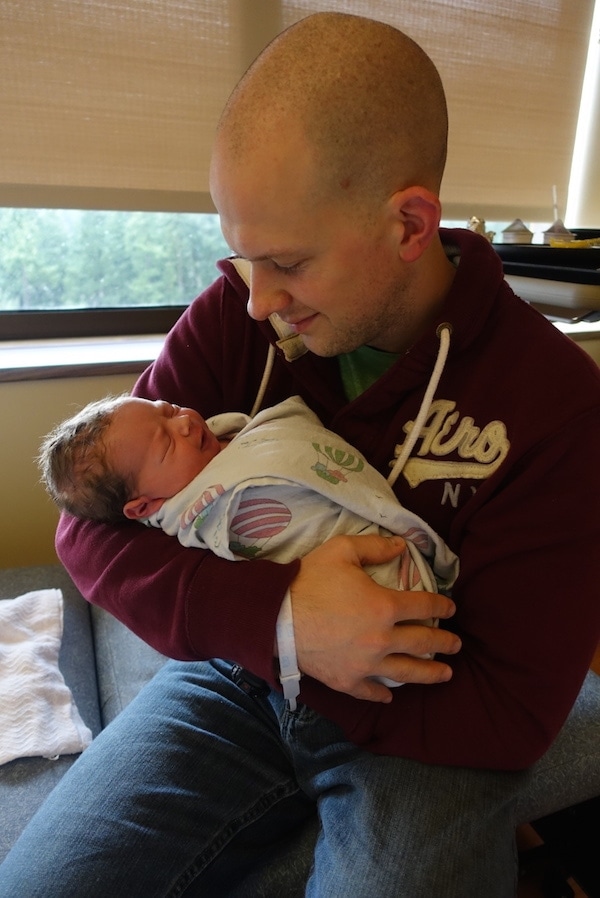 The nurse who helped deliver Edward noticed that he was tongue tied so his initial breastfeeding session was a bust. But after getting his tongue clipped over the weekend, it has made a WORLD of difference in how much he is able to nurse and my overall comfort level. I also was able to see a lactation consultant who helped a ton as well.

My milk has come in with a vengeance, much to Eddie’s content. Now that he can nurse freely, he loves the boob. He’s only lost 3 ounces of his birth weight and should be coming right back up soon. He also had a hint of jaundice but that is quickly going away too, thanks to his hearty appetite. 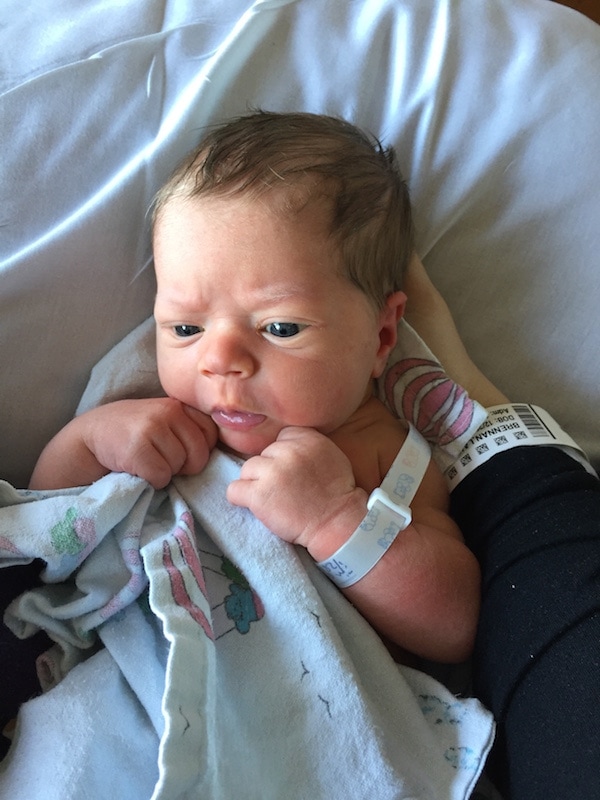 Brooke is completely smitten with her brother and doesn’t want to do anything but hold him! Blake doesn’t really care too much about his new brother, but we’re hoping he will come around.

Some of you are wondering where we came up with his name. Well, its sort of a family name. Edward is my Dad’s middle name and John is my husband’s father’s name. So we figured they sounded good together. I like calling him Ed or Eddie but Gordon prefers calling his Edward. Any of those three names are fine by me 🙂

Overall we are smitten with this little boy and are hoping to be getting some naps in soon.