Perfectly sweet and delicious, this Banana Pudding will make you never want another dessert again! An amazing no-bake treat that stores for days in the fridge; perfect for any holiday or potluck! Try my Pumpkin Gingersnap Banana Pudding for a festive variation.

I never used to be a banana pudding addict until I started making this banana pudding recipe. Ohhhh mama is it good! A little time consuming because you have to plan ahead, but so so delicious! This recipe comes from Magnolia Bakery (as in the place in NYC known for their banana pudding). There is no better banana pudding recipe out there which is why I’m sharing this slight variation of their recipe with you today. Because this is completely no-bake, it’s a perfect make ahead dessert. Also, it’s a serious crowd pleaser. You’re going to love it.

Banana Pudding is a traditional southern recipe consisting of pudding, banana, and vanilla wafer cookie layers. However, this recipe can be found just about anywhere nowadays. Although it’s easier to buy it pre-made, it tastes even better homemade. So here’s what you’ll need to make my banana pudding recipe yourself:

Bananas – you’re going to need ripe bananas for this recipe. FYI: The longer the banana pudding sits, the more likely the bananas are to brown. The best way to ensure the bananas won’t turn brown is if you cover them completely with the pudding mixture so they aren’t exposed to air. (Brown bananas are still fine to eat, they just don’t look very appetizing.)

Vanilla Wafer Layers – essentially a texture and flavor compliment to the creamy pudding and sweet bananas.

Pudding Layers – made with instant vanilla pudding, cold water and sweetened condensed milk. After it sets, fresh whipped cream is folded into the pudding to make it even lighter.

One disclaimer about using substitutions: this recipe is basically a copycat of the Magnolia Bakery Banana Pudding Recipe, so if you do sub anything in or out it’s not going to be as close to that recipe. But as always, feel free to make it how YOU like it.

Before You Begin, Read This-

So, this banana pudding recipe comes down to doing two major things. Follow these tips and you too will end up with an amazing and delicious homemade banana pudding.

How to Make Banana Pudding

This banana pudding recipe is so darn simple that anyone can make it! The hardest part is having the patience to let the pudding mixture thicken and then leaving the finished banana pudding in the fridge long enough for the vanilla wafers to soften. Even though this takes some time, it ends up being the perfect make ahead dessert for any gathering or holiday. For full recipe details, see the printable recipe card down below. Here is what you can expect making this Banana Pudding.

In a large bowl, beat together the sweetened condensed milk and water until well combined – about 1 minute. Add the pudding mix and beat well.

Cover and refrigerate for 3-4 hours up to overnight to set and become very thick.

In a large bowl, whip the heavy cream until stiff peaks form. Gently fold the whipped cream into the pudding mixture until no streaks of pudding remain.

Peel and Slice four bananas right before assembly. Yellow bananas with a few brown spots are the perfect bananas to use! Sweet, soft and ripe.

Add 1/2 the Nilla wafers into the bottom of a 9×13 pan. Yes, you can use a trifle dish. See my notes below about that.

Top with a layer of bananas, and 1/2 of the pudding mixture.

Repeat these layers once more, garnishing with additional wafers or wafer crumbs on the top layer.

Cover tightly and allow to chill in the fridge for at least 4 hours – or up to 8 hours. Once everything has had time to set, serve it up and enjoy!

It’s pretty traditional to serve a layered dessert, like a banana pudding, in a trifle dish to see all the pretty layers. While it certainly makes a statement, it’s not necessary. I actually prefer making this in a 9×13 for easy transportation as well as storage. It also takes up less space in my fridge.

If you’d like to use a trifle dish, divide the vanilla wafers, the bananas, and the pudding mixture into thirds and layer three times instead of just two.

Do I Serve Banana Pudding Warm or Cold?

The answer to this question is: it depends. There are lots of variations of banana pudding out there! This recipe is served cold and is completely no-bake, thanks to the instant vanilla pudding. Other recipes for banana pudding are made completely from scratch with a homemade pudding (similar to how you would make a banana cream pie filling), some have a meringue topping (more traditional southern) and some are served warm.

How Long Does Banana Pudding Last?

I would suggest eating this banana pudding within two days of making it. Any longer and the bananas start to get too brown and ripe. Since I suggest using very ripe bananas to begin with, that window is only about two days. BUT, if you use bananas that aren’t as soft or ripe, you could push this to 3-4 days.

The time frame on this recipe is what makes it such a great potluck or holiday dessert, lots of mouths to feed means not worrying about what to do with leftovers.

Can this Banana Pudding Recipe be Frozen?

Unfortunately, because of the ingredients in banana pudding, it should not be frozen. The pudding is mixed with water and then folded together with whipped cream. When frozen and then thawed, the consistency of the pudding will inevitably change. The bananas will also turn brown and mushy when defrosted. Not pretty or delicious.

If you do want to make this in advance, simply make the pudding mixture ahead of time and don’t assemble with the nilla wafers and bananas until the day before.

Below is the printable banana pudding recipe card. Be sure to pin, save, bookmark, print, share, so you can keep this recipe close. It’s a good one.

Have a great, day, friends! 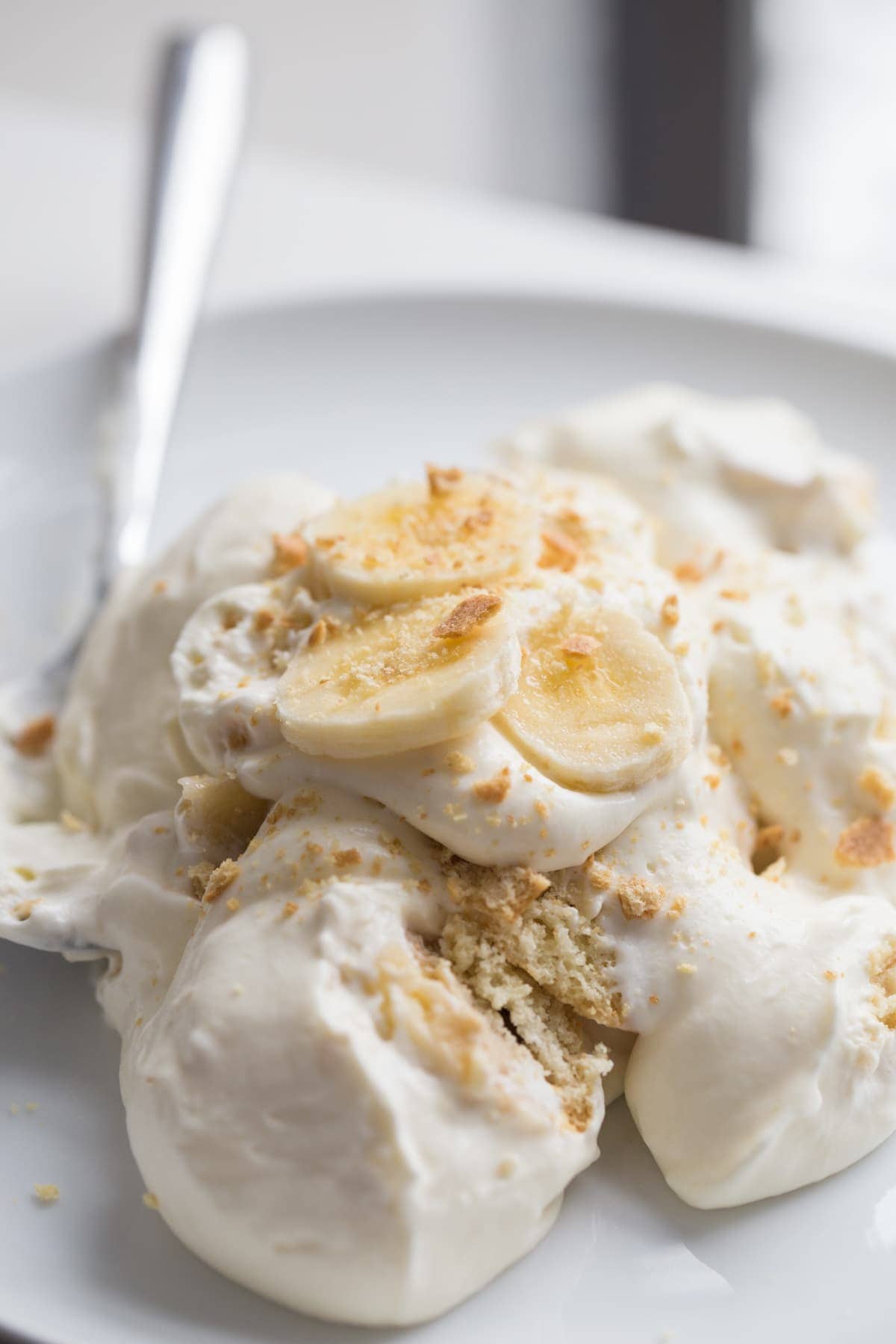 PrintPrint Pin ItPin It
5 from 8 votes