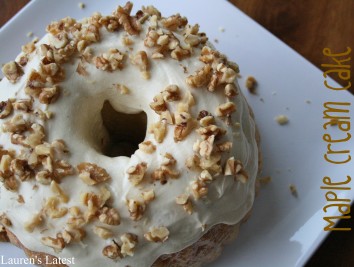 Don’t judge me. I made a cake…..tested it twice…..and then ate them both.

Ok, that was an over-exaggeration but I have been eating plenty of cake these last few days and for good reason! I made something fantastically evil that you are going to need some sort of higher power to intervene when you’ve eaten half. That’s right my friends. I said it. Fantastically evil. Higher Power.

This whole cake thing started on Christmas Day when I got a nice big bottle of Pure Canadian Maple Syrup in my stocking courtesy of Santa. How did he know I had been missing it? Love that guy. Anyways, I brought it back into the good ol’ US of A with me with a plan to make pancakes. Well, pancakes are good and all, but not creative. So I thought bigger and better. Enter Maple Cream Cake idea. It was a good idea- I might even say brilliant but ohhhhhhhhhhh sooooooooooooo bad. Was I not thinking? Did I not remember that when something is THAT good that I can’t stop?

Have I ever told you the story of when I ate an entire pan of better than sex cake? I had never tried it before. And then one day I did……in college. Seriously. For real. My roommate made it on a Sunday evening and I ate the whooooooooole thing. It was a 9×13. And it helped me gain the freshman 15. 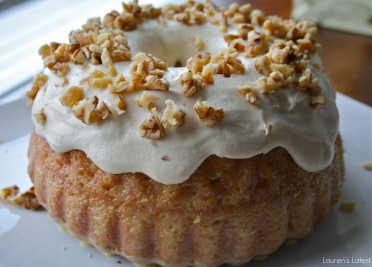 Yikes. Anyways guys, this is my latest creation coming out of my kitchen. And it’s a winner. Simply just a plain jane cake in a bundt pan that you smother in sweetened condensed milk and then frost with the most delectable buttery maple-ee creamy frosting. I think the frosting was my favorite part. Can you tell? 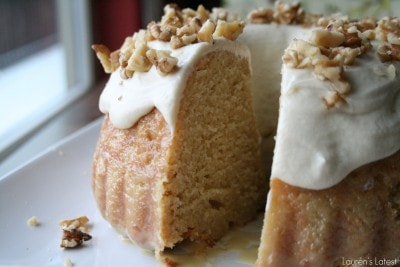 You top the whole thing off with some walnuts for a nice crunch and there you have it! Maple Cream Cake! Isn’t it purdy? I like bundt cakes. They always come out so nicely! That reminds me: grease your bundt pan LIBERALLY. I went a little heavy on the non-stick cooking spray and would advise you to do the same. Also, do you remember on my big fat greek wedding when the guy’s parents bring a bundt cake to the engagement party to meet her family and the mom says to her aunt “there’s a hole in this cake”. I liked that part………… Random. 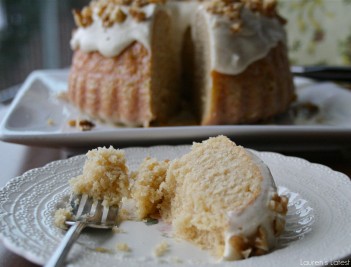 If you do choose to make this in a bundt pan be aware it takes a little longer than if you were to do it in a 9×13 pan. And the degree of difficulty increases exponentially. Ha! Just kidding. It is a little more finicky though. So, if you want to play it safe, make it in the 9×13. That’s what I did at first and it turned out fine! Just fold in some whipped cream to the frosting to make it creamier and so you get a little more out of it so it’ll spread across your cake. I might even go so far to say make double the frosting. If you have extra, then you can save it for later.

And one last note: You MUST use real maple syrup. If you don’t the world will turn upside down and all the zodiac signs will change leaving everyone in mayhem. That’s all!

Happy Baking! Enter at your own risk!

This cake can easily be make in a 9×13 pan! Bake at 325 for 40-50 minutes. When you remove the cake from the oven, cool 15 minutes, poke holes into it and pour the entire can of sweetened condensed milk over top. Place into the refrigerator until sweetened condensed milk has been absorbed. Make frosting as listed above, but fold in 1 cup plain whipped cream. Frost cake and top with walnuts. Store in refrigerator until ready to serve.