Remember these bad boys? Raise your hand if you’ve made them yet…..yeah, told ya they were the best and closest recipe! Ever since I got that recipe down, there hasn’t been a day gone by that I haven’t daydreamed about them. Seriously.THAT.Good.

Well, the other day, I didn’t have a few hours to spare and I needed my cinnamon bun fix. I did have 20 minutes or so to make something and stuff my face, so I chose to get a little wild, pop some corn on the stove top and slather it in cinnamon butter…and then drizzle with icing.

I’m all about healthy options…

Cause butter, cinnamon and sugar is MUCH healthier on popcorn.

It did the job, filled my tummy and tasted sweet, buttery and delicious! A great snack for me and my little one. And, didjaknow stovetop popcorn is one of the EASIEST things to make in the world EVER? Seriously it is. Want me to show you? M’kay! Let’s do it!

The very first thing you need to do is get your cinnamon butter ready for that hot popcorn. Sprinkle a teaspoon of cinnamon into 1/4 cup melted butter.

Stir it all up and set aside.

For this icing, measure out two tablespoons of half & half and pour it over 1/2 cup powdered sugar. You may need more or less depending on how drizzly you want it.

You want this to be not too thick and not too thin. I’m so specific. Haha!

Now we can start on the popcorn. Pour some canola oil into the bottom of a large pot.

Sprinkle in some popcorn kernels. I used 1/2 cup because it was enough to cover the bottom of the pot in 1 even layer.

Cover the pot with a tight fitting lid {or some foil if your lid can’t be found.} Turn a burner on high and start moving the pot back and forthover the heat. After a few minutes, the kernels will start popping. Once that popping starts slowing way down, it’s done!

Pour the popcorn onto a sheet tray and get ready to live!

Drizzle the cinnamon butter over top the hot popcorn as evenly as you can along with the icing.

Stir to coat everything together and dig in!! Feel free to sprinkle a little extra cinnamon if you want to embrace the spice!

This girl could not keep her eyes off of this afternoon snack!!

We totally ate all of this in one day that’s how good it was.

Enjoy, friends! Have a great weekend 🙂 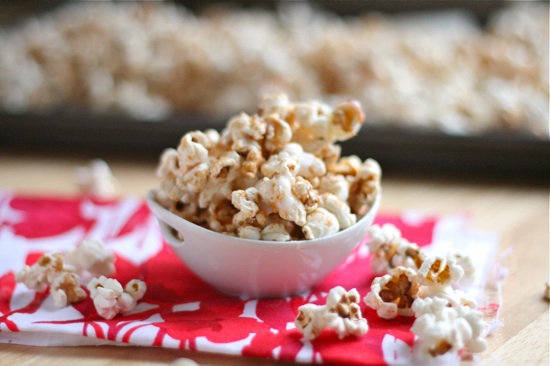 It’s important to keep the pot moving the entire time its over the heat–this ensures the kernels don’t ever burn.