If you’re looking for a ridiculously decadent brownie, you’ve come to the right place. This Hot Fudge Brownie recipe is SO good, especially with vanilla ice cream! What could be better than a Hot Fudge Brownie Sundae during the hot summer days? I say nothing! This dessert is so rich, decadent, fudgy, and sweet. Straight up ridiculous, but mamamia, that warm chocolatey brownie with the cold ice cream gets me every.single.time.

Making Hot Fudge Brownies couldn’t be easier. I break it down into 3 basic steps- make the brownies, make the hot fudge, and assemble adding ice cream and desired toppings.

Below I will guide you step by step on how to make your own homemade hot fudge.

The possibilities are endless when it comes to toppings. Ice cream is at the top of that list. Store-bought stuff is great or if you have the time, make some homemade Vanilla Ice Cream or Chocolate Ice Cream.

Other toppings to consider are Maraschino Cherries, nuts, sprinkles, chocolate or caramel syrup, marshmallows or fruit!

Looking for other chocolate sauces to use on this recipe? I’ve got you covered: Nutella Hot Fudge Sauce, Peppermint Chocolate Sauce, and Chocolate Ganache.

How to Make Hot Fudge Brownies

Making these brownies comes together pretty quickly. Make the brownies, make the hot fudge and spread over holes you have poked into the brownies. Top with toppings and ice cream. Voila! For full details on how to make Hot Fudge Brownies, see the recipe card down below.

Preheat oven according to Brownie Mix directions. Prep 9×9 pan by lightly spraying with a non-stick spray. Set pan aside.

Start by following the directions on a boxed brownie mix. See? EASY is the name of the game. Pour batter into the greased 9×9 pan and pop it into the oven according to baking directions on the box.

While brownies are baking, place heavy cream, corn syrup, brown sugar, cocoa, salt, and half the chocolate chips into a small saucepan. Place over medium heat and stir frequently until it comes to a boil.

Reduce the heat to low and lightly simmer for 5 minutes. Remove from heat and whisk in remaining chocolate chips, butter, and vanilla.

Pour sauce into a separate bowl to cool until brownies are done baking.

Once brownies are done baking, cool 5-10 minutes and then poke holes into it throughout the entire pan of brownies. I had used a fork to poke the holes, but if I had to do it again I would use something bigger…like the end of a wooden spoon or something similar. You want the whole thing drenched in hot fudge.

Allow brownies to cool another 10 minutes or so before cutting and serving.

Top With Ice Cream + Other Toppings

Cut into squares and top with vanilla ice cream. Serve right away and enjoy the heavenly goodness!

Store any leftover brownies in an airtight container in the fridge. They will stay fresh for 4-5 days.

Here’s the printable recipe card. I hope you make this tasty treat this week! Enjoy! 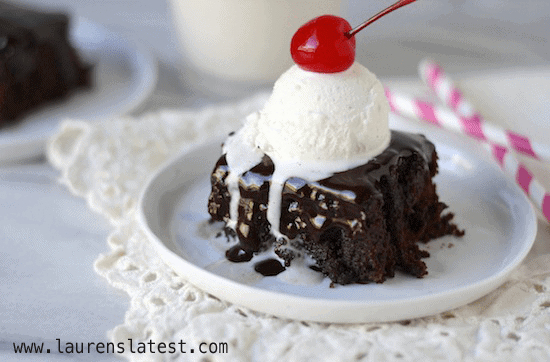 for the hot fudge-