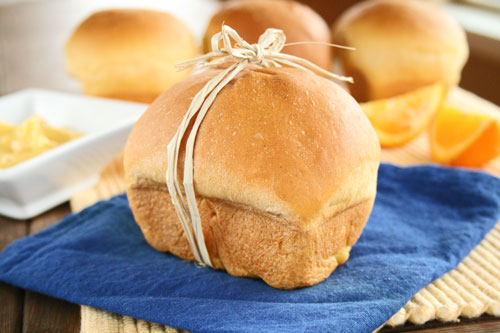 Sometimes when it’s raining and pouring, soup and freshly baked bread are the only things that seem natural to make. The weather here this last week has been pretty awful. However, this has given me a great excuse to bake these cute little loaves!

Let it be known that I love everything mini! Tarts, pies, cookies, muffins, babies, I LOVE THEM ALL.

And I say babies because they are miniature people. Not because I’m thinking of mini babies. {That would be weird.}

I bought this pan a few months ago when my husband was gone because I could and he was no where around to stop me! Mwahaha! {Not that he would have stopped me…} If you’re in the market for a mini loaf pan, this is the pan I own, except it’s by Wilton.

So, this recipe comes together just like any other bread, but is orange ’cause of the sweet potato… and a little sweeter ’cause of the sugar. You make the dough, let it rise, punch it down, put it into the pans, let it rise and bake. Then, before you pass out from the heavenly smell, you whip together some amazing Orange Cinnamon Honey Butter to slather all over your fresh baby loaves fresh out of the oven.

You WILL die 1,000 deaths after one bite of these. Guaranteed. But only if you use an obscene amount of butter.

I got a coupon from this little function for some Kerry Gold Butter, so that’s what I used in the orange cinnamon honey butter. Super delicious! {As if butter could be bad though, right?}

So, find some time this weekend to try these out! I promise you will be glad you did! 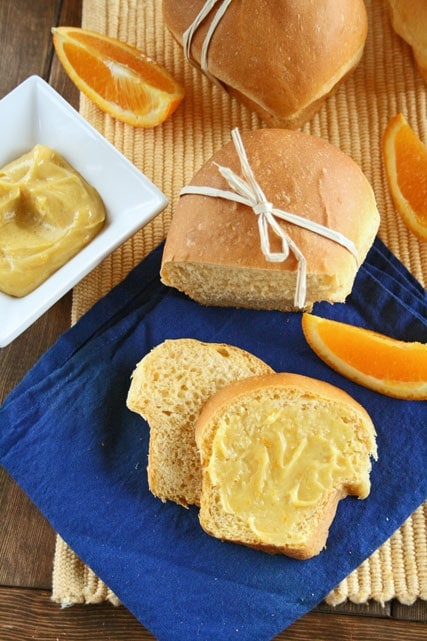 Some other recipes you might like:
Mom’s Potato Rolls from Lauren’s Latest
Mini Pumpkin Loaves from The Faux Martha
Julia Child’s Croissants with Quick Blackberry Jam from Barbara Bakes
Potato Rosemary Rolls from Two Peas and Their Pod
Challah from The Novice Chef
Homemade Rustic Pita Bread from Simply Scratch 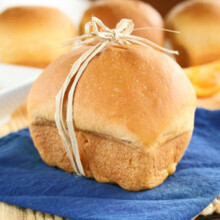 For the Sweet Potato Mini Loaves-

For the Orange Cinnamon Honey Butter-

I used 1 medium sized sweet potato for this recipe. I stabbed it a few times and microwaved it on high for 7 minutes. I let it cool 10 minutes or so before I cut into it, scooped out the insides and mashed.