Upgrade store-bought brownie mix by making these decadent Pumpkin Brownies. It’s like Brownies and Pumpkin Cheesecake had a baby. Super easy and super fast, these are perfect for Fall baking (super similar to my Cheesecake Brownies).

Part brownie, part pumpkin, swirled together to create these amazing pumpkin brownies. You can either take a store-bought shortcut (like I did) and use boxed brownie mix or you are always welcome to make brownies from scratch. A boxed mix is faster whereas homemade would be more chocolatey and fudgier. If you’re going the store-bought route you’re going to need other ingredients like eggs, oil, and water. Each mix is different so just go by what it says on the box.

Since these are the epitome of Fall, you bet your booty I am swirling the brownie batter with a delicious pumpkin cheesecake situation. (Also, have you tried my Pumpkin Cheesecake yet?) The cream cheese is creamy and tangy, the pumpkin is brings all the Fall flavor. Don’t confuse pure 100% canned pumpkin for pumpkin pie filling, they’re different!

Also take note of the spices (cinnamon, nutmeg, and ground ginger) which all make a huge difference to the overall taste of the brownies. If you don’t have those three on hand, feel free to replace them with 1 teaspoon of pumpkin pie spice.

How to Make Pumpkin Brownies

For full details on how to make Pumpkin Brownies, see the recipe card down below 🙂

Grease 9×13 pan with butter or non-stick cooking spray and set aside. Lining your pan with parchment paper is an optional step, but is great for removal and easy cutting. Prepare brownie batter according to packaged directions or according to homemade brownie directions (without any mix-ins). Pour batter into prepared pan.

What If I Want Thicker Brownies?

Simple! Use a smaller pan (such as an 8×8 glass pan). The only thing you need to take note of is that your pumpkin brownies will take longer to bake so adjust accordingly.

In a small bowl, whip cream cheese, sugar, and flour until smooth. Stir in pumpkin and seasonings.

Drop pumpkin mixture by the spoonful over brownie batter. With a butter knife, swirl cream cheese into the batter being careful not to touch the bottom of the pan.

Bake according to the given directions, or until brownies are set. Cool and cut into squares.

These Pumpkin Brownies do not need to be stored in the fridge, doing so might actually dry them out! Instead, cover well in plastic wrap and leave it out on the counter for up to 4 days. If desired, reheat in the microwave for a couple of seconds to get that fresh-from-the-oven feel.

Can You Freeze These?

Yes, you can freeze these Pumpkin Brownies. Wrap well and store in an airtight container for up to three months. Thaw in the fridge and reheat in the microwave or oven until warmed through.

If you have ever made a boxed brownie mix before, you will know exactly what I mean when I say IT SUCKS trying to cut pretty pieces! It’s nearly impossible! But, I have two tips for you that should make this significantly easier.

Be sure to check out all of my other pumpkin desserts while you’re at it!

The printable recipe card is down below! Enjoy 🙂 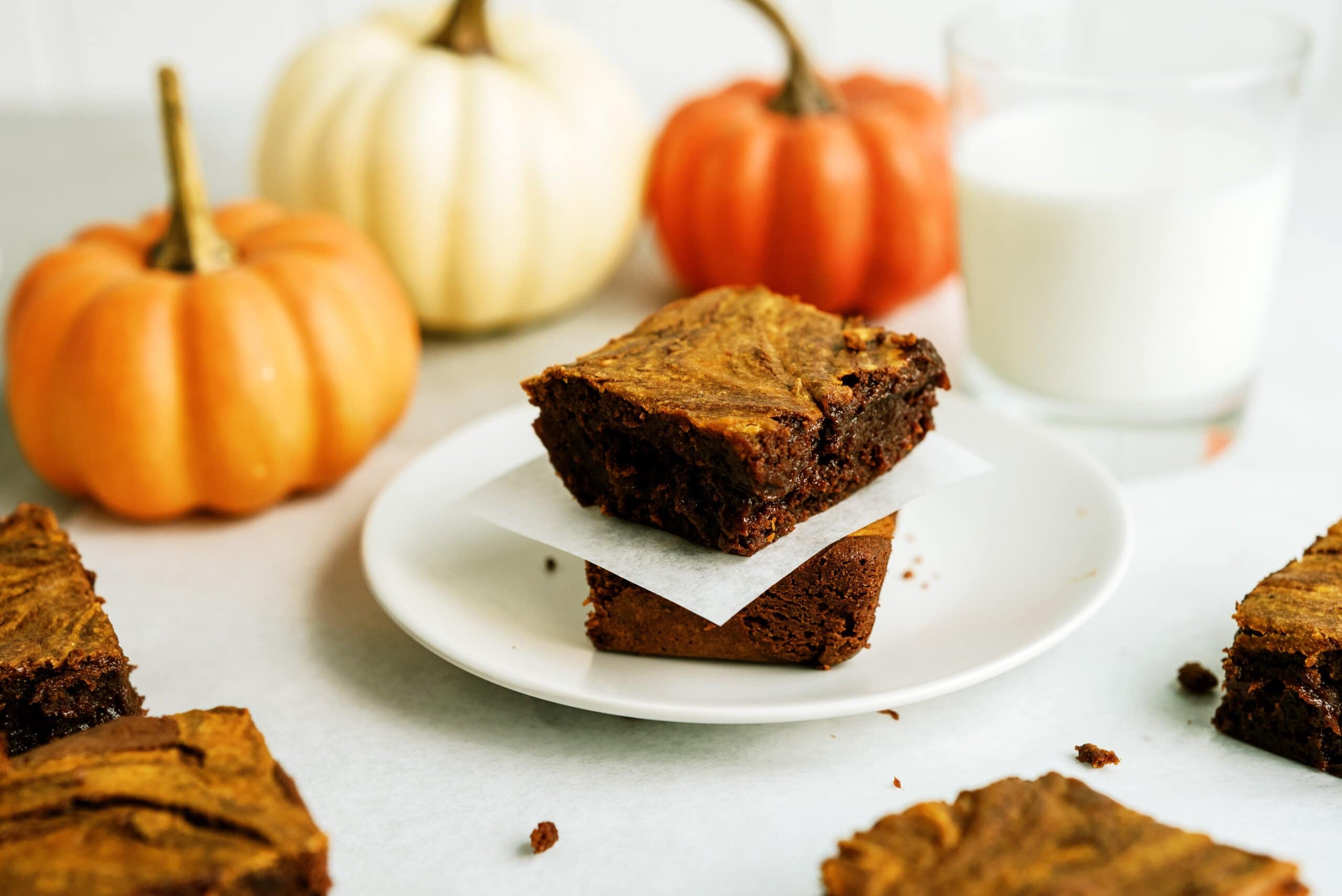 For the Pumpkin Cream Cheese Mixture

*Each brownie mix is different and comes with a different set of instructions. When it comes to increments for the eggs, water, and oil, follow your boxed directions.