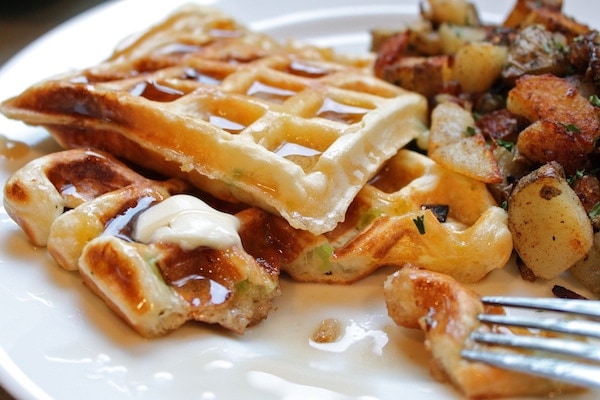 Well, Happy Friday! I am certainly happy to know that the weekend is just around the corner. TGIF!

So, before I get into this recipe today, I need to tell you a funny story…except it’s not THAT funny….but it sort of is. You’ll know what I mean in a minute. Remeber THIS post when I told you all about my husband getting bit by some mysterious insect and getting an infection that you could see through his vein? Well, I mentioned he got antibiotics for it and he was going to be fine. WELL, turns out, he’s allergic to those antibiotics and had to go back to the doctor for (are you ready for this) a total body skin rash, puffy ears and hands and body aches! To me, I think “aww poor guy…he can’t catch a break” and then I start laughing. Do you get the funny/not funny angle I was mentioning before? Ok, good. 🙂 Seriously though. Poor guy! Haha.

Now that that is out of the way, let me tell you about a great breakfast, lunch or dinner idea! Waffles! But not just any waffles-delicious savory ones with grated cheddar cheese, scallions and pepper! Oh mama were they tasty. And of course I needed a side dish and hash browns were the obvious choice. Neither of these dishes are ‘fancy’ or gourmet per say, but I purposely chose a name that sounded a little fancier than ‘waffles with green onions and cheese’. (See? Not so fancy sounding.)

But, guys, honestly, these were delicious. Gourmet in taste! As simple as they were to make, the end product was stellar…and yes, I just said stellar. I love the salty sweet combinations so I had my waffles with syrup (and maybe a little too much butter) and they were to die for! My husband thought I was weird because ‘cheese and onions don’t go with syrup’ but, I am here to say that they somehow miraculously work well together and just go. So trust me and try it. Or be like my husband and eat them plain. Try them both ways and keep me posted!

I usually try to only eat 1 waffle but I most definitely ate 3 the morning I made these. They were too good not to eat. Do you ever get that way? Where you try something and it’s so good you just don’t want to stop eating? Is it bad that I get that way a lot with most foods I make? Uhh, never mind.

Moving on to….hash-browns! Or is it Hashbrowns or Hash Browns? Either way, this ‘recipe’ is pretty straight forward. The only shortcut thing I do is I microwave them to get a baked potato first and then cube them up so I just have to brown them in a little butter. It is such a time saver and so much easier then cooking them from the raw state. And, that way your potatoes won’t discolor on you either.  So, all I do to make these is melt some butter in a pan, saute some onions and then add in the potatoes and cook them until they’re brown and crispy. That’s about it. I’m all about simple things, especially crispy buttery potatoes. Yum.

Anyways, like I mentioned earlier, these two recipes would be great as breakfast, lunch or dinner! Add a fried egg and some fruit and you’ve got a great meal! Fancy enough to serve guests, but easy enough to be manageable for a novice chef. Be sure to make these this weekend! You won’t be sorry! 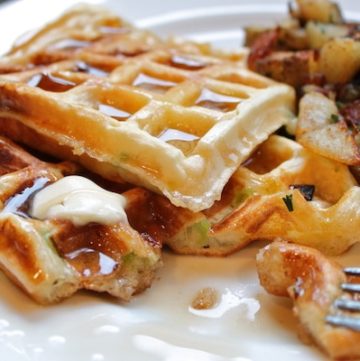 Lauren
These savory scallion and cheddar filled waffles, served with a side of crispy hash browns, make a delicious breakfast, lunch, or dinner.

For the hash browns-

For the hash browns- 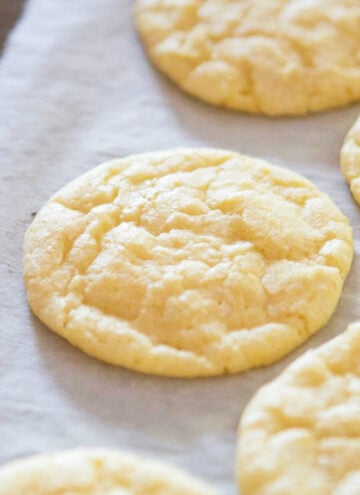