There is nothing more delicious than soft and chewy cinnamon rolls. Especially ones that have been drizzled in a brown butter icing. This recipe is a no muss-no fuss version that will have you never wanting another recipe again.

Hey friends, have I got a treat for you. Today I am sharing a new, hot-off-the-presses, soft, chewy, extra sweet, easy, decadent recipe for cinnamon rolls that will have you asking for seconds and thirds. It really is that fantastic and after one bite you will be converted. 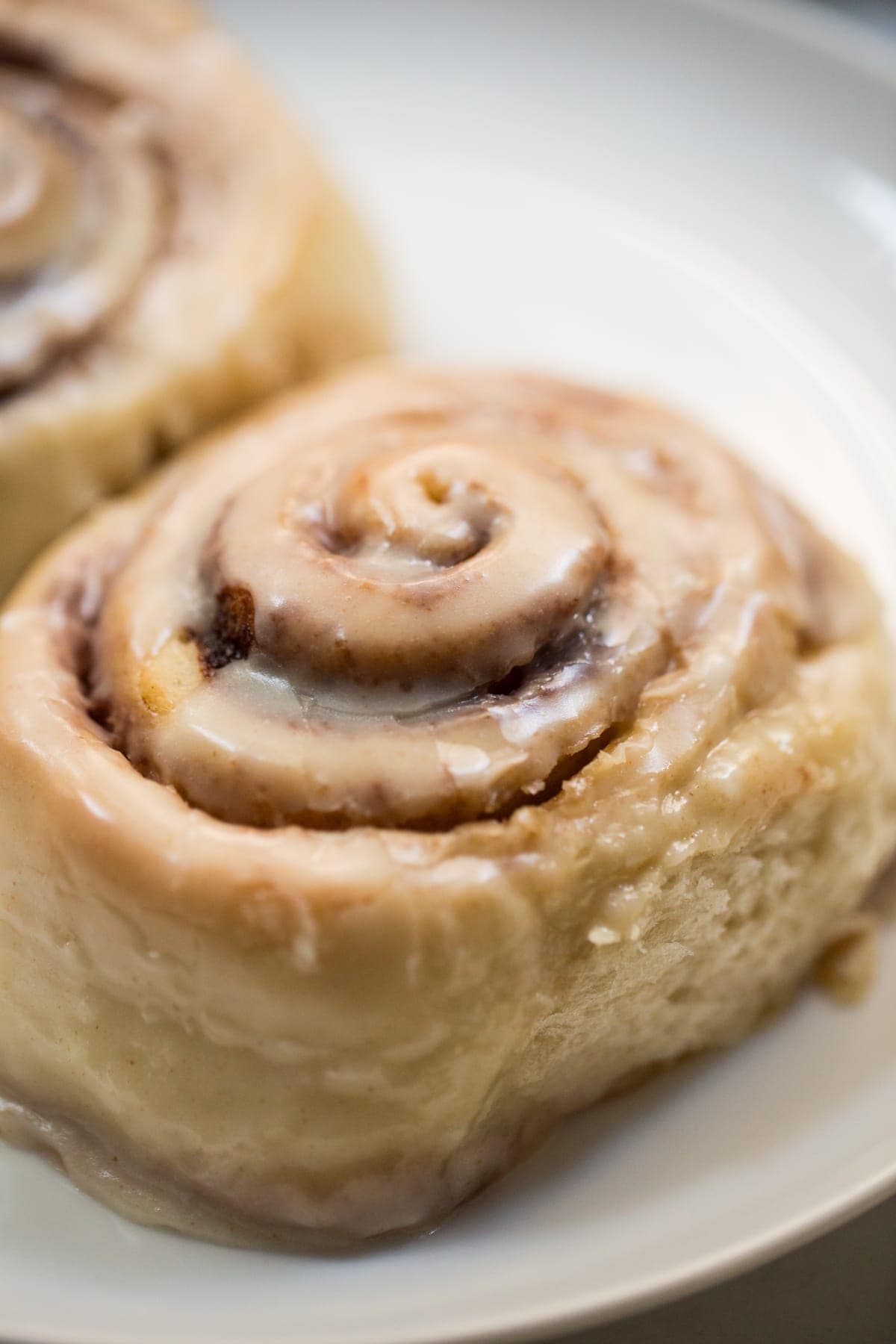 Yes, really! I know my Cinnabon recipe put my site on the map and then my 1-hour Cinnabon really went a little crazy on Pinterest, but those two are their own beasts. That recipe was based on Cinnabon’s recipe with a highly enriched dough that can be harder to work with.

They are delicious (with 600+ comments and 170 reviews) but I was looking to create a softer, more pillowy cinnamon roll that had a forgiving, easy to work with dough that would give consistent results again and again. 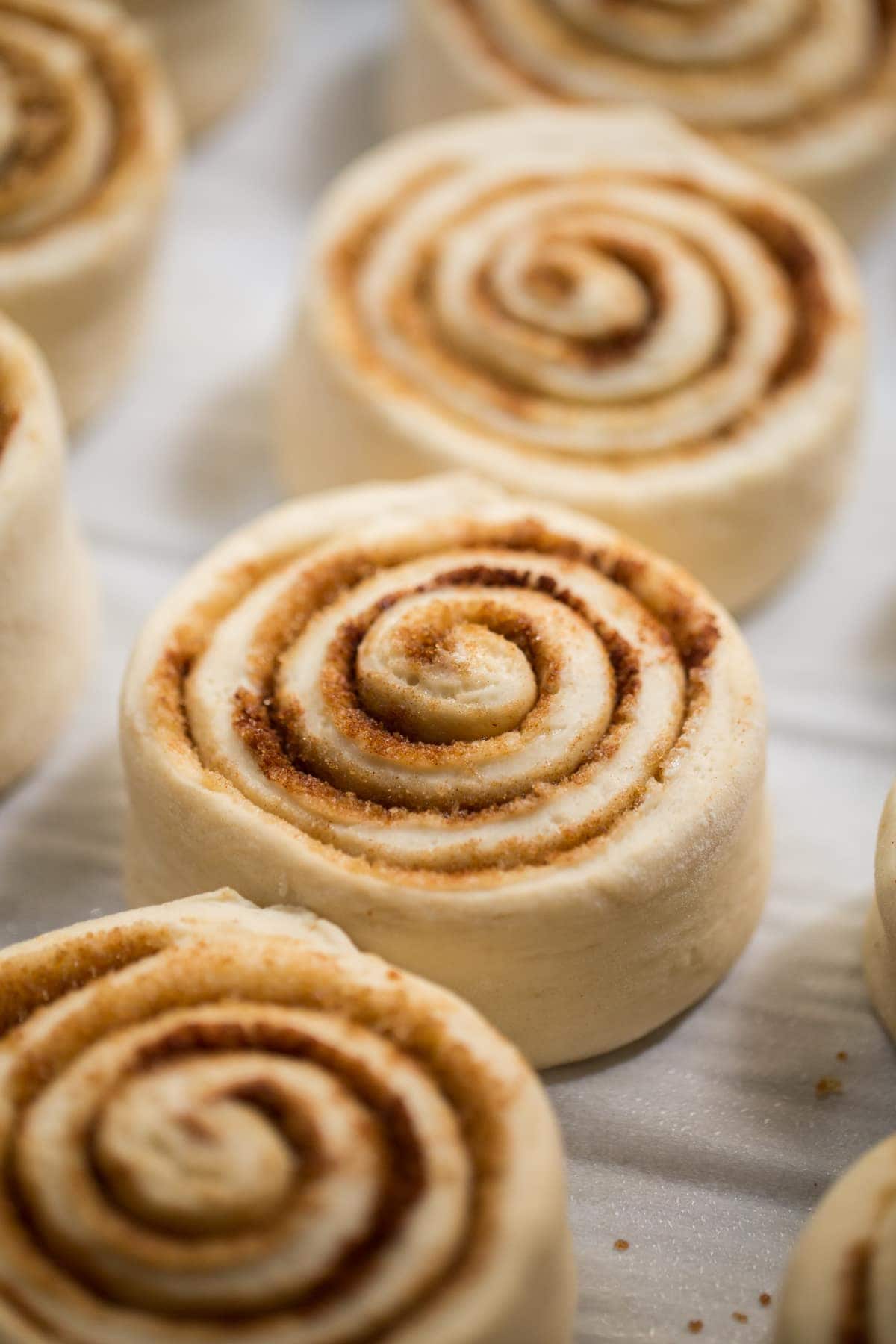 How is this Cinnamon Roll Recipe different?

The dough for these cinnamon rolls is based off of my homemade White Bread recipe. It yields a softer dough that is perfect for beginners who maybe aren’t as familiar with yeasted doughs or as confident. It leaves room for errors all while giving you a great finished product.

Mix that with plenty of cinnamon, sugar and butter and you have got yourself a winner of a recipe!

Finish the whole thing off with a brown butter icing and you’re ready to enter a whole new realm of delicious you never knew existed. 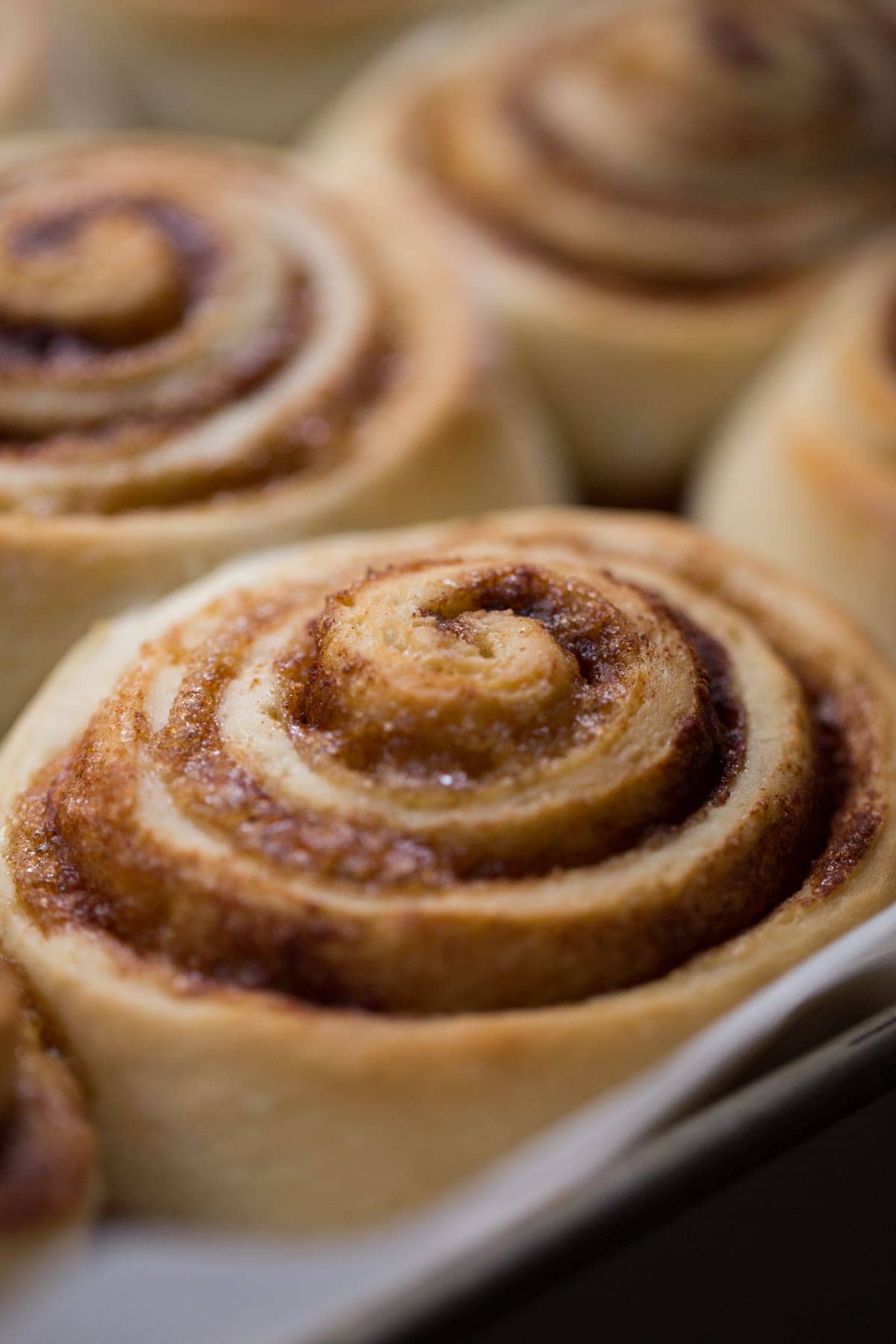 Having success with Yeast

There are a few things you can do when working with yeast to ensure you get the best-finished product possible.

Check the expiration date. Your yeast is likely to leave your baked goods feeling (and looking) flat if it has expired! Buy it fresh and use it sooner than later. Store in the fridge to help extend shelf life.

Use a quick rise yeast. I like quick rise yeasts because I can see them working almost immediately. Of course, regular old dry yeast is fine too. It just takes a little more rise time. I love SAF-instant yeast and use it almost exclusively.

Use warm water to activate. Think baby bath water temperature. If you go too warm, you can kill the yeast so when in doubt, opt for cooler water than warmer. If using a thermometer, you want to aim for 100-110 degrees F.

Let yeast proof first before using it. In almost every recipe, you are required to dissolve the yeast in warm water and some sort of sugar (granulated sugar, honey, agave, etc..) to activate and ‘prove’ that it will work. After 10 minutes, it should look foamy on top with lots of carbon dioxide bubbles. If there is no change, throw it out and try again OR get new yeast. 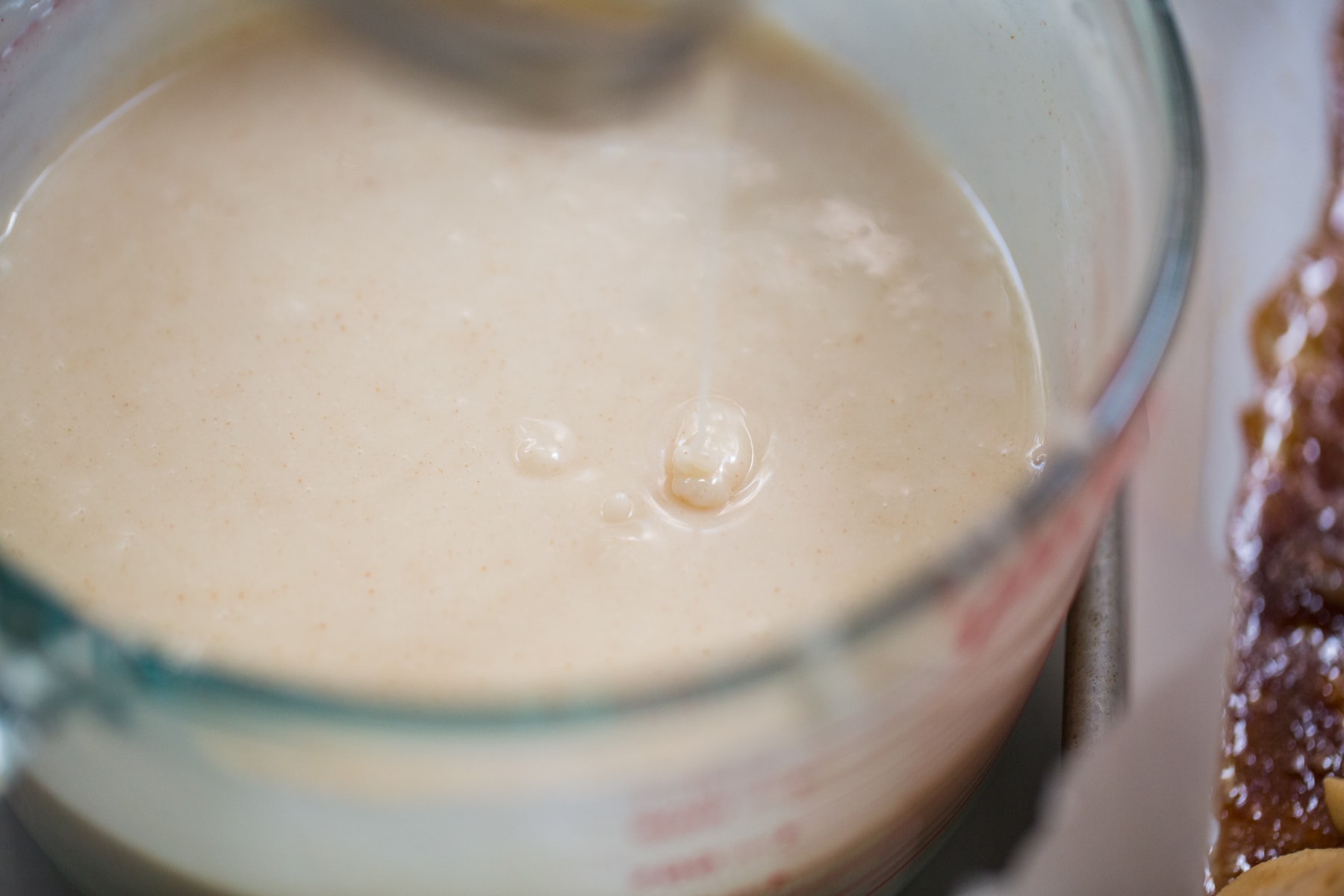 While I could probably list a hundred tips for making any kind of yeasted dough, it all comes back to one thing:

don’t add too much flour

Everyone and their mom measure flour differently. On top of that, we all live in different climates in different parts of the country. This makes for all sorts of issues when talking about baking. That is why there are visual markers I’ve been talking about for years (like in my pizza dough recipe) that are worth mentioning again.

When you are making this cinnamon roll dough, look for:

Using these markers lets you have confidence in the process and you’re on the right track….even if you add in 1/2 cup less or 1/2 cup more of flour that the 6 cup measurement. And don’t forget: when in doubt, leave the dough a little on the sticky side and then refrigerate. You can always add in more flour later as you’re rolling out the rolls to compensate. It’s a very forgiving dough. 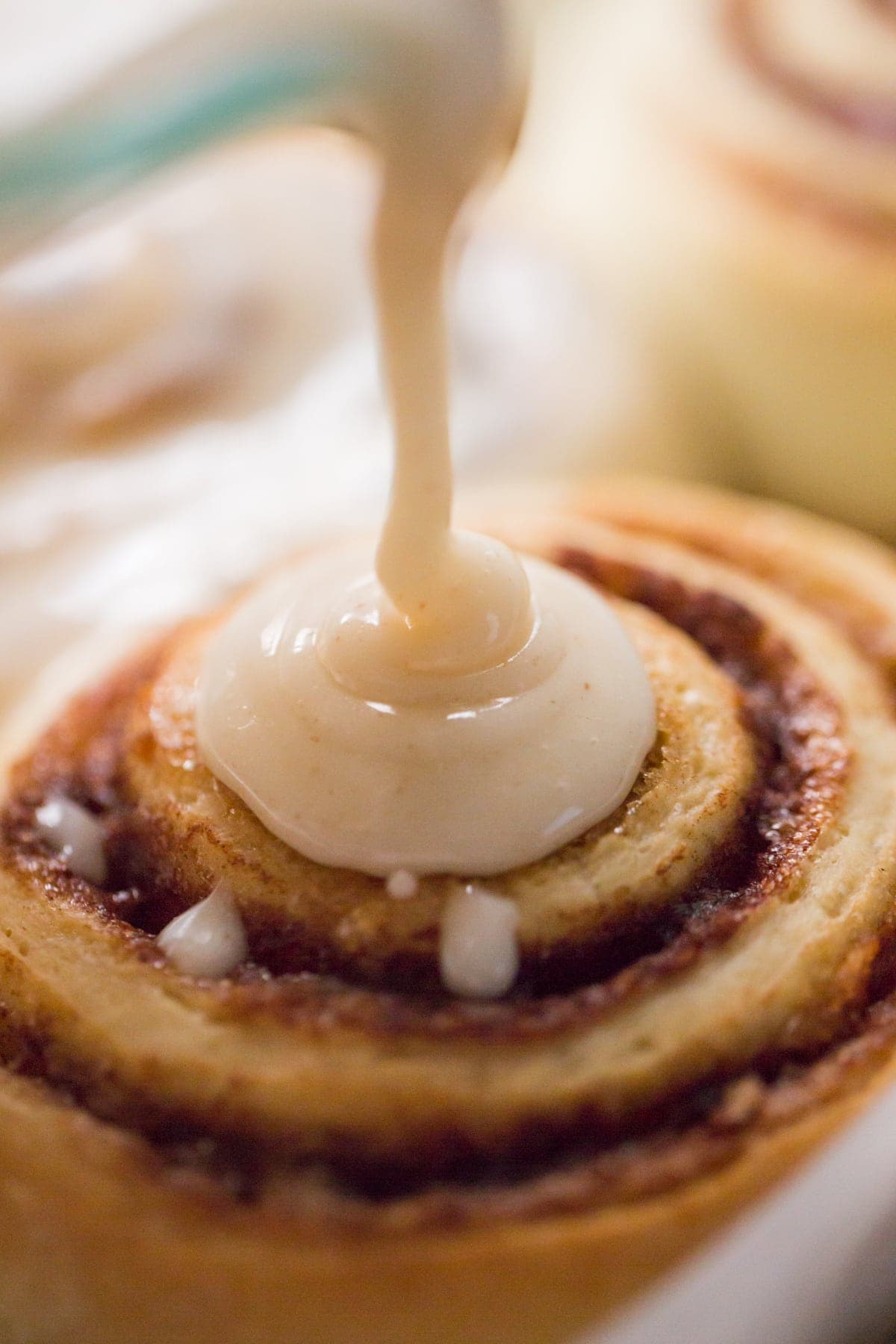 Do I have to brown my butter for the icing?

No! But the brown butter definitely adds a really nice, nutty (almost maple) flavor that is to die for.

How to brown butter

Very simply put, butter becomes brown or ‘browned butter’ when you have toasted up the milk solids.

So, to brown butter, melt 1/2 cup of butter in a light-colored skillet over medium heat. After its completely melted, it will start to foam. Swirl the pan as it foams and after a minute or two, you’ll notice little brown flecks in the butter that have started to smell nutty. Once they have become a medium brown color, remove from the heat immediately. Voila! Browned butter! 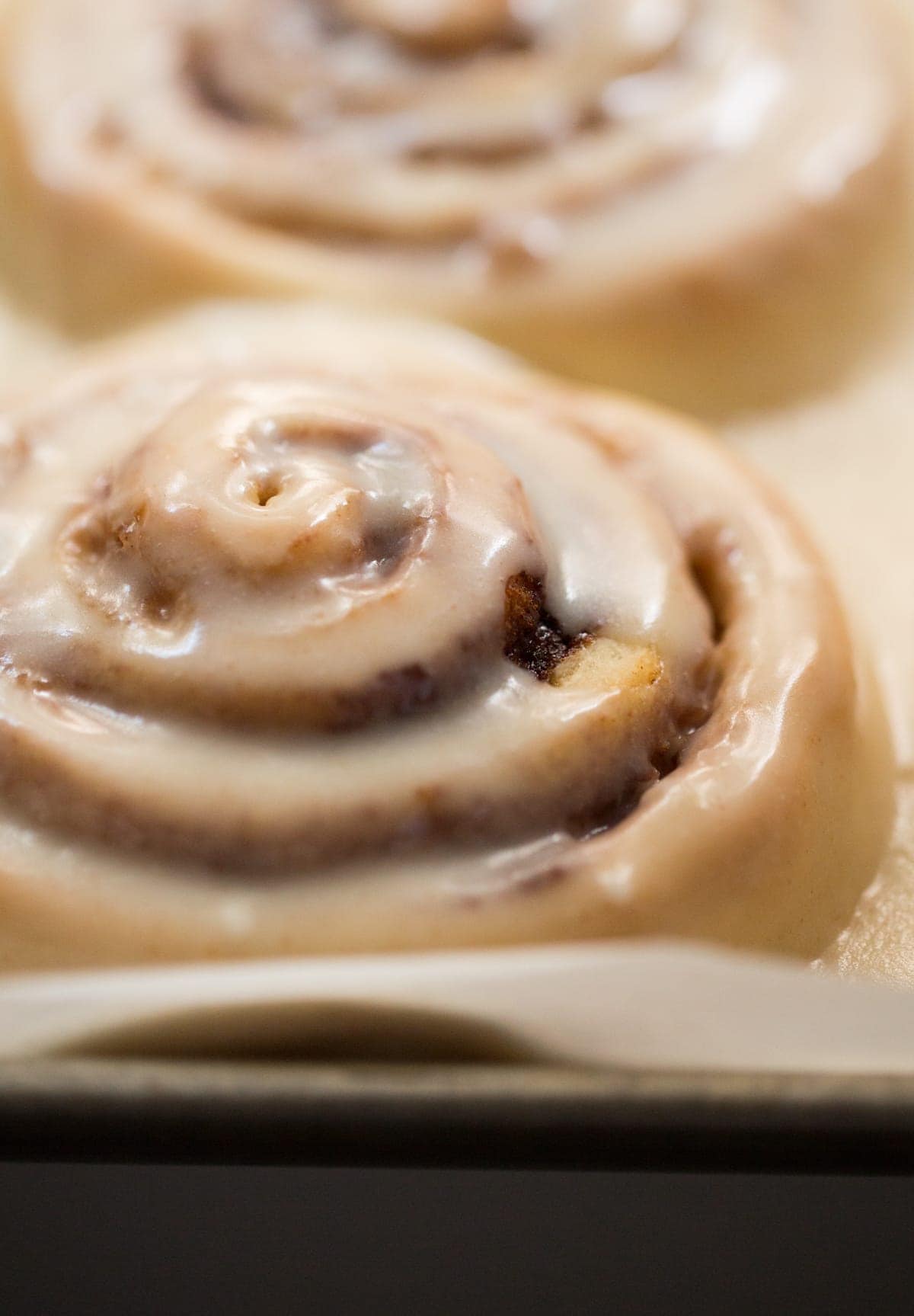 After you have browned your butter, whisk in some milk, vanilla, and powdered sugar until smooth and that is how you make the glorious browned butter icing. Drizzle it overtop of your warm cinnamon rolls and behold the glory.

It may seem like a little much icing, but I assure you more is more!

If you prefer a frosting instead of a glaze, give my cream cheese frosting a try instead. Delicious!

I like storing my baked and iced cinnamon rolls covered well with plastic wrap, at room temperature for up to 24 hours.

They can last up to 48 hours in the fridge, but I just prefer serving mine warm and fresh when they are at their peak softness and they just don’t stay that way for longer than 48 hours, unfortunately. 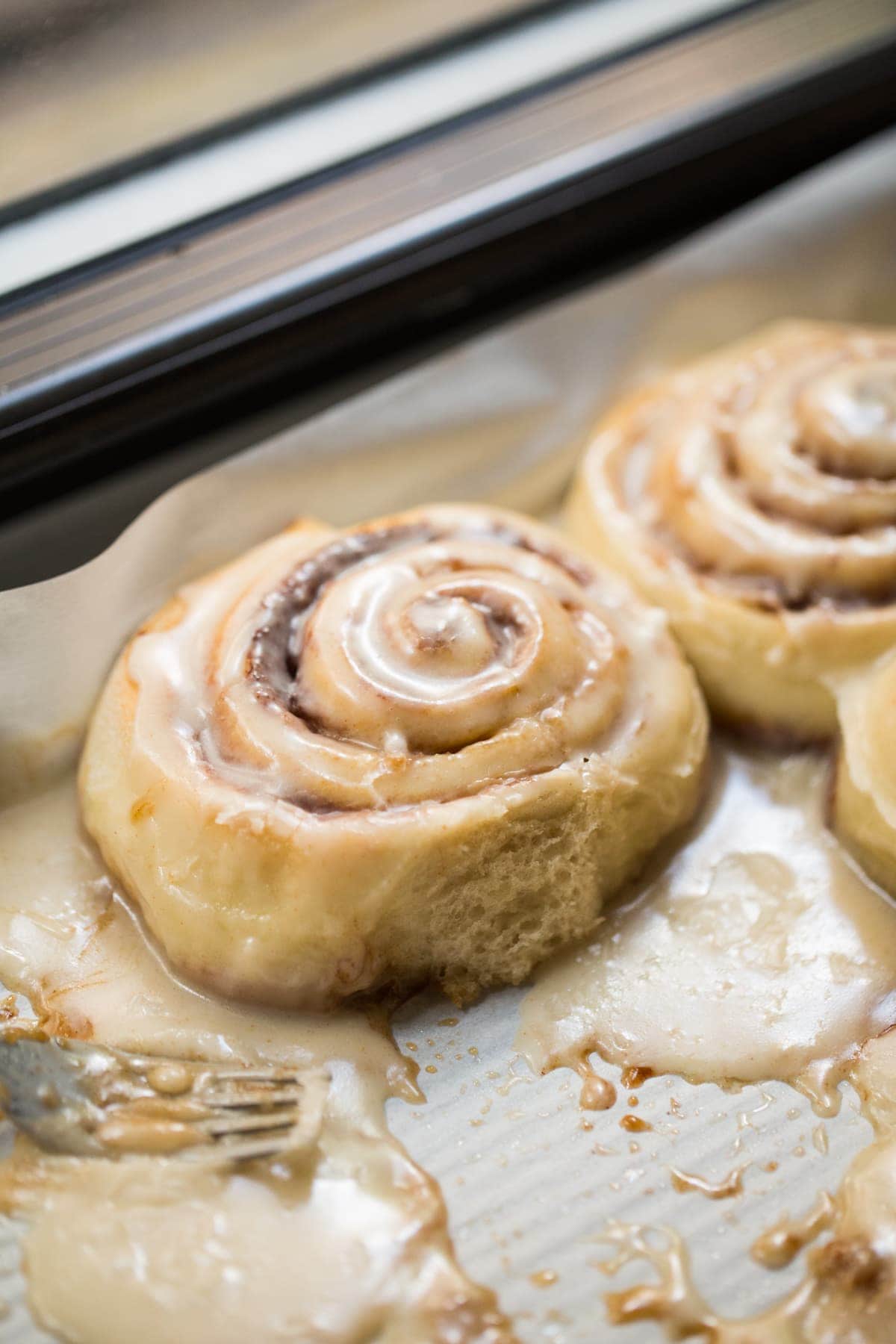 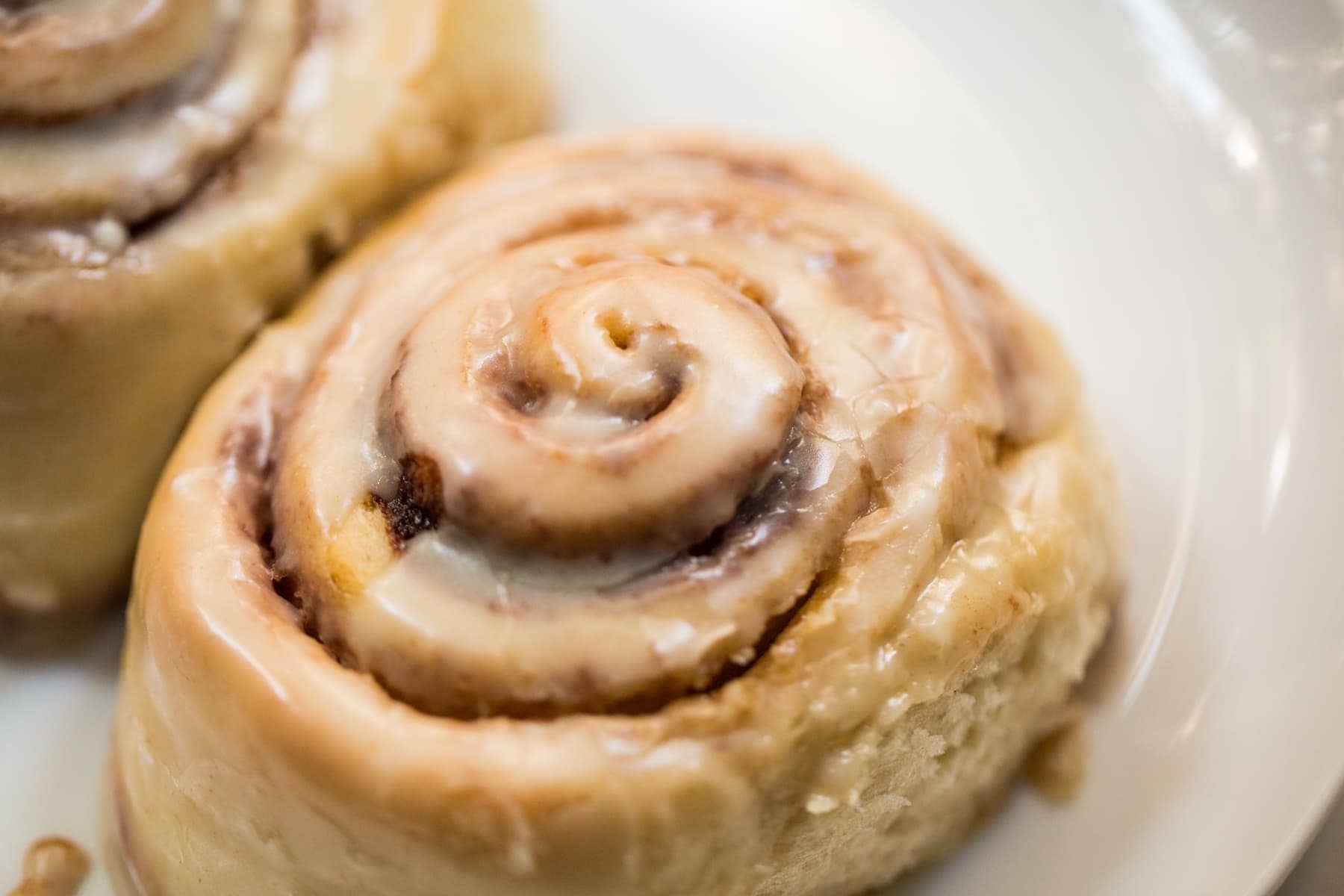 Please oh please make and enjoy these cinnamon rolls! It was such a fun one to develop and share with friends. So much so that I might just start my own cinnamon roll shop here in NYC! Haha, maybe not, but a girl can dream!

Have a great day, friends.

There is nothing more delicious that a soft and chewy cinnamon roll. Especially one that has been drizzled in a brown butter icing. This recipe is a no muss-no fuss version that will have you never wanting another recipe again.
servings 16 servings
Prep Time 4 hrs
Cook Time 25 mins

For the brown butter icing

Don't let the 6 cup increment of flour fool you! This is an approximation. Only add enough flour to get you a dough that: When in doubt, leave the dough a little on the sticky side and then refrigerate. You can always add in more flour later as you're rolling out the rolls to compensate.